The big-eyed doll manga look so popular in South Korea can be a health hazard. 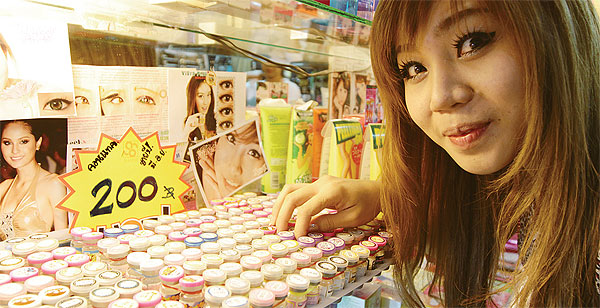 The following is an extract. Read the full article and see more photos here.

EYE HEALTH: Jeepers creepers, Where'd Ya get those peepers by Prapasri Vasuhirun

Her eyes are dramatically highlighted with black eyeliner. Her false eyelashes are long enough to attract attention from people walking by. Her big, round, grey eyes positively sparkle. So striking are they, in fact, that they qualify as her most interesting facial feature by far.

Even though Vasinee "Namphung" Jarassanprasert, a clothes-shop owner in her mid-twenties, has no problems with her eyesight, she's been wearing big-eye contact lenses on a regular basis for more than three years now. Much taken by the doll-like manga look popular in South Korea, she said she's already tried out cosmetic contacts in more than 10 different shades...

...Namphung is one of many Thais who prefer contact lenses imported from South Korea. Marketed as a cosmetic product, these normally come in small bottles with colourful labels and are now easily ordered online or picked up from streetside stalls around Bangkok and other urban centres.

Given their lower price tag (varies from 99 to over 300 baht a pair), longer life cycle (most last for at least a year) and fancier range of colours than brands from elsewhere, Korean lenses are now very popular with Thai teenagers on tight budgets. But they recently stirred up a mini-controversy when four local girls who used them were diagnosed as having severe corneal infections. Even though the debate is still ongoing about whether the infections were due to low-quality lenses or unhygienic handling, the topic bears further exposure since misuse can lead to temporary loss of vision or even permanent blindness.

...However, the craze for the innocent doe-eyed look, first drawn for characters in Japanese manga comics and taken one step further by J-pop and K-pop stars, has caused the number of wearers to jump exponentially over the past five to six years. Dr Sakchai estimates that the number of Thais wearing cosmetic lenses is now in excess of 200,000, compared to 100,000 four years ago, and that many of these people have good or normal eyesight.

Big-eye contacts are a type of tinted lens intended to make the cornea look bigger. The diameter varies from 13.8 to 18mm while that of the normal cornea or corrective lens is 12mm.

"In tandem with this increase in the number of lens wearers, the number of people suffering from eye infections is also rising," Dr Sakchai observed.

People who wear contacts, whether cosmetic or corrective, can contract infections if they fail to take adequate care of their lenses or personal hygiene. Those who use lenses for longer than eight hours a day or wear them while sleeping put themselves at higher risk...

...Like condoms, surgical and examination gloves, HIV test kits and syringes, contacts lenses are defined as medical equipment, imports of which must be approved by Thailand's Food and Drug Administration. According to the FDA, currently only four companies - Johnson & Johnson (Thailand), CIBA Vision (Thailand), Bausch & Lomb (Thailand) and Maxim Inter-Corporation - have obtained a licence to import contact lenses.

Those sold by Maxim are currently the only big-eye lenses which have been given official approval. So none of those lenses in bottles with colourful labels that you see on sale online or on the street here have been passed by the FDA...

dramatically - in a big way อย่างใหญ่หลวง
highlighted - stressed, emphasized; made something more noticeable ที่เน้นย้ำ
eyeliner - a cosmetic used to better define the eyes and make them stand out and be more visible and attractive, applied around the edges or contour of the eye to create a variety of illusions (See Wikipedia)
eyelashes - the short hairs which grow along the edges of the eye ขนตา
attract attention - to cause someone to be interested in something ดึงดูดความสนใจ
sparkle - to be very bright, lively and interesting
positively sparkle - to be very bright and lively
striking - very noticeable, different, and unusual เด่นชัด
X qualifies as Y - X has everything necessary to be called Y
feature - to include someone or something as an important part ทำให้เด่น
facial feature - one the parts or aspects of a person's face (examples: large eyes, bushy eyebrows, big lips, rosy cheeks, broad Nordic forehead, ...etc)
most interesting by far - much more interesting than others

eyesight - the ability to see, also called "visual perception" (See Wikipedia)
contact lenses - a small lense worn on the surface of the eye (cornea) instead of glasses (See Wikipedia)
on a regular basis - done regularly
much taken by Y - likes Y very much
manga - very popular Japanese comic books, including a broad range of subjects: action-adventure, romance, sports and games, historical drama, comedy, science fiction and fantasy, mystery, horror, sexuality, and business/commerce (See Wikipedia)
doll-like manga look - looks like a doll, just like the girls in a Japanese comic book
cosmetic - involving substances, treatments, etc. that which are intended to improve the appearance of your face or body ซึ่งทำให้สวยงาม
cosmetic contacts - cosmetic contact lenses
shade - a certain color, within one of the broad types of color (examples: a shade of blue, a shade of red)

varies from X to Y - the value can be from X to Y
cycle - a series of events repeated over and over again (in the same order)
life cycle - product life cycle, the life of a product (from purchase and first use to getting old and worn out and finally throwing away)
range - a number of different things that are of the same general type ขอบข่าย, ประเภท
brands - products with well-established names that people remember, that create a certain image and expectations about the product
tight budget - don't have a lot of money to spend
mini - small
controversy - a disagreement, especially about a public policy or a moral issue that a lot of people have strong feelings about ความขัดแย้ง
stir up a controversy - create an argument or disagreement about something (here: allowing these technically illegal contact lenses to be sold or not)
local - in this country (here: Thailand)
diagnosis (noun) - what disease a person, according to the expert opinion of a doctor X diagnosed as Y - a doctor has the opinion that X has disease Y
severe - very serious and unpleasant รุนแรง

cornea - the outermost front window of the eye, a clear transparent portion of the outer coat of the eyeball through which light passes to the lens, the clear tissue in front of the eye  (like a front glass covering of a watch), "light passes through the cornea being focused, or bent, and then passes through the pupil to be focused a little more by the eye's natural crystalline lens" (See Wikipedia and Google Definitions)
infection - when large numbers of viruses, prions, bacteria, and viroids enter the body and reproduce resulting in disease (See Wikipedia)
corneal infections - when the cornea or outermost covering of the eye gets infected with bacteria
contract infections - get an infection in your body
debate - a discussion or formal argument on an issue between people with different views (See Wikipedia)
ongoing - currently happening, happening at the present moment; continuing ไม่หยุดยั้ง, ต่อเนื่อง อย่างต่อเนื่อง

hygienic - clean
unhygienic - not clean
handling - doing things with or to something (examples: this is the lawyer handling the legal case, the fee covers postage and handling for the parcel)
unhygienic handling - when you are doing things with the contact lenses (not making sure they remain clean)
topic bears further exposure - the story or facts should be made known to the public
misuse - not used in the correct or right way ใช้ในทางที่ผิด
temporary - for a short time only, short-term ชั่วคราว
permanent - a change that will last forever (will never go back to the original state), happening or existing for a long time or for all time in the future ถาวร
loss of vision - same as "blindness"
blind (adjective) - when a person cannot see anymore
blindness (noun) - the condition of being unable to see การสูญเสียสายตา

innocent - harmless; not intended to hurt anyone ไม่มีพิษมีภัย
doe - a female deer look - the way a person looks (with special clothes, hair style, etc)
innocent doe-eyed look - looking very beautiful like a large eyes like a female deer in the forest, etc, etc...... J-Pop - Japanese Pop music, "often featured in anime. Some of the more notable J-Pop artists are Aiko, Morning Musume and Hitomi Yaida" (See Wikipedia) K-Pop - Korean Pop music, now popular all over the world and especially in Asia (See Wikipedia)
exponentially - by very large numbers
estimates - guesses of what the size, value, amount, cost, etc. of something might be การประมาณค่า
in excess of Y - more than Y; greater than Y

tint - adding a small amount of a colour
tinted lens - a lens with a small amount of colour added
intended - planned; wanted to happen ที่ได้วางแผนไว้ ที่ตั้งใจให้เกิดขึ้น
diameter - the length of a straight line that crosses a circle through the centre เส้นผ่านศูนย์กลาง
in tandem with...... - along with, combined with..., in addition to...
suffering - physical or mental pain or problems ความทุกข์ทรมาน

corrective lens - a contact lens that helps people see (who are having problems seeing, who need to wear glasses)
contract - to become infected with a disease ติดเชื้อ
adequate - enough (to achieve goals)
fail to take adequate care of - fail to take care of enough (does not meet standards of care)
hygiene - keeping your body and surroundings clean so that you are not infected with a disease สุขลักษณะ (See Wikipedia)
personal hygiene - the process of keeping your body clean (as well as the places that you live and work in)
risk - the possibility that something dangerous or unpleasant might happen ความเสี่ยง
put at risk - put in a dangerous situation, in which damage or harm may result

syringes - the plastic tube with needle on it used to inject drugs into the body (See Wikipedia)
Food and Drug Administration (FDA) - the government agency that controls the sale of foods and drugs, checks for safety (See Wikipedia)
licence - an official document that gives someone permission to do or use something ใบอนุญาต
import - to buy or bring in products from another country นำเข้า
official - approved by the government or some authority ที่เป็นทางการ
approval - official permission การอนุมัต