Learning to read food labels can reduce the risk of buying food with dangerous chemical residues. 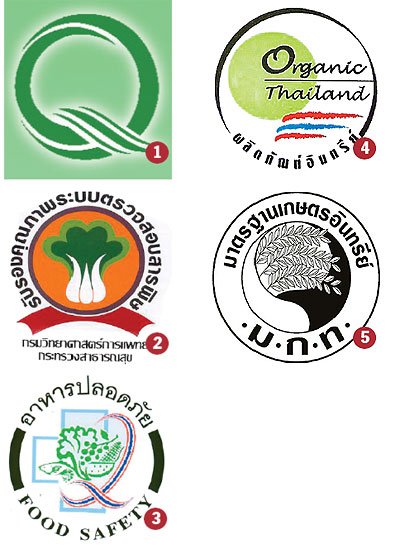 Health: SMART CHOICE: Get picky with logos by Sirinya Wattanasukchai

Buying a pack of vegetables these days isn't as easy as it used to be. You can't judge the produce by its look anymore, but by the packaging and safety logo on them.

Consumers don't simply judge the produce from its colour, freshness or the holes that ensure it is safe from pesticide because it has already been visited by worms.

However, reading the label on the package isn't that simple. There's usually more than one food logo on one package that will make you flip the package a few times and watch logos unfamiliar more closely before deciding to buy a pack of simple bitter gourd or morning glory.

Although there's no regulation and food commodities can be sold in the market or supermarket without a certified logo, officially there are four logos approved by government agencies.

First is the Q (photo 1) mark, which once came in different colours to signify the grade of the produce but is now restricted to green for all products, is most common on food packages. It stands for "Thai Quality Product" and is approved by the National Bureau of Agriculture Commodity and Food Standard (ACFS) under the Ministry of Agriculture and Cooperatives. Seeing this sign on a package means the produce has passed GAP, GMP, HACCP, and/or organic standards, that is, it has been checked from the beginning till the end - planting and harvesting to packaging - according to the ACFS.

The second logo (photo 2), approved by the Public Health Ministry's Department of Medical Sciences, featuring green vegetable against orange background indicates the fruits or vegetables contain an appropriate amount of chemical residue. Buying a product with this logo means you only want to know what's left on what you are eating, without wanting to know what had been done during the planting process.

Food safety (photo 3) is the most generic logo of all. It can be found on any fresh food or ingredients available in the market including vegetables and fruits that don't have FDA registration.

Or you can go chemical-free with Organic Thailand logo (photo 4). Approved by ACFS, the product is not only chemical-free but GMO-free as well.

Apart from these four official logos, Organic Agriculture Certification Thailand is the most recognised organisation. It initiated its own organic logo (photo 5) which is widely accepted, thanks to its expertise in community-based organic farming. The logo is more familiar among health-conscious consumers than the Organic Thailand brand.

However, these are not the only recognised certified logos around. Supermarkets and hypermarkets have created their own in-house logos to earn the consumer's trust in their produce. Logos are named differently from one to another, so is the look.

Generally speaking, there are three types of in-house logos; chemical-safe or hygienic, hydroponics and organic. The first type refers to commodities where pesticide or chemicals were used during plantation, but followed by a significant chemical-free period before harvest. Products bearing this logo are supposed to be chemical-free or contaminated with a very small amount of residue

The second, hydroponics, as we know is to grow vegetable using mineral nutrient solutions, in water, without soil. Although many, including the sellers themselves, often misunderstand the type as organic, hydroponics involve significant reliance on fertiliser during the growing process.

Last is the organic logo usually recognisable among a small group in a community, based on trust and the familiarity between the growers and consumers indicated on the label. Therefore, the logo found in a supermarket in your community may not appear elsewhere.

So it seems the era of buying a pack of vegetable without a certified label is about to be gone. People need a kind of guarantee for whatever they are buying. Psychologically, the more the logos on a package, the healthier and more hygienic the produce we get, low on chemical - or even better - chemical-free.

But of course, it comes with a cost. The more logos often mean the higher price tag although nobody knows if the individual package has been checked.

food safety - a scientific discipline that studies the handling, preparation, and storage of food to prevent food from carying illness (See Wikipedia)
standards - an acceptable level of quality or achievement มาตรฐาน
food safety standards - sets of rules and standards to follow  in the production and handling of food products (See GAP, GMP and HACCP below)

picky - very careful in choosing or doing something (will only accept, if meets standards)
packaging - the container or covering for a product while it is waiting to be sold in stores
ensure - to make certain that something happens or is done รับรอง ให้ความมั่นใจ ให้การยืนยัน รับรอง

label - a company which produces goods for sale, the goods themselves, or the company's name or symbol ชื่อ, ตรา, เครื่องหมายการค้า
simple - easy to understand; not complicated ง่าย,ไม่ยุ่งยาก, ไม่ซับซ้อน
unfamiliar - not have any knowledge or experience of something ซึ่งไม่คุ้นเคย
buy - accept the truth of ยอมรับ, เห็นด้วยกับ (ความคิด, คำแนะนำ, ข้อเสนอแนะ)

bitter - having a strong and harsh taste, unpleasant for many people (prevents the eating of poisonous toxic substances) ขม (See Wikipedia)
bitter gourd - a vine that grows in Asia, Africa, and the Caribbean with among the most bitter of all fruits (See Wikipedia) มะระ
morning glory - a common green vegetable in Thailand and Burma that often grows wild in fields ผักบุ้ง (See Wikipedia)

regulation - the laws that control and govern the industry or activity กฎระเบียบ, ระเบียบข้อบังคับ
commodities - goods with every unit the same (every kilo of rice or oil is the same, for example), usually bought in large quantities สินค้าที่ซื้อเป็นจำนวนมากๆ
certified - inspected officially and verified that the company follows the rules ผ่านการรับรองคุณภาพ

mark - some picture, writing easily seen, that has some meaning
signify - to be a sign or symbol of something เป็นสัญลักษณ์
grade - the level of quality of a product or material
grade of the produce - the level of quality of vegetables sold in a store
restricted - limited or controlled ซึ่งถูกยับยั้ง, ซึ่งถูกควบคุม
common - found often, used often, etc
means - methods; ways วิธี, วิธีการ

generic - generic brand, products without a brand name, that meet the minimum requirements for that kind of products (but nothing special added by a company's special brand) (See Wikipedia)
background -  the part of a picture or photo behind the main objects (people, things) in the picture

process - a series of actions that you take in order to achieve a result แนวทางปฏิบัติ, กระบวน, วิธีการ
ingredients - foods that are used with other foods in the preparation of a particular dish ส่วนประกอบ

registration - recording in an official list (of approved items)
FDA - Food and Drug Administration, the government agency that checks for safety and controls the output of food and drug products (See Wikipedia)
FDA registration - when the FDA approves a new product and puts on the list of approved products

GMO - a Genetically Modified Organism or Genetically Engineered Organism is a "plant, animal or micro-organism whose genes have been altered using genetic modification by the inclusion of foreign genetic material or by the alteration of some DNA. The foreign material may come from other individuals of the same or a different species, or it may be synthetic" (See Wikipedia)
GMO-free - a plant or animal which has not had its genes modified by engineers

official - approved by the government or some authority ที่เป็นทางการ
initiated - created; started ริเริ่มโดย
expertise - a high level of knowledge or skill ทักษะความรู้, ความคิดเห็นของผู้เชี่ยวชาญ special skills or knowledge from study or practical experience ความถนัด special detailed knowledge and know-how of a subject ความชำนาญเฉพาะทาง
community - the people living in one particular area ชุมชน
organic foods - grown without the use of pesticides or chemical fertilizers, free from contamination by human or industrial waste, and processed without radiation or food additives (See Wikipedia)
organic farming - farming without use of pesticides or chemical fertilizers, farming that produces organic food
conscious - aware; noticing that something exists or is happening and realising that it is important ความสำนึก ความตระหนักถึง
consumers - people who buy things (individuals and families)
health-conscious consumers - consumers who buy healthy food
brand - a type of product made by a particular company ตรา, ยี่ห้อ

hypermarkets - very large stores like Tesco Lotus and Carrefour
in-house - done inside the company (not hiring someone outside the company to do the job = outsourcing)
trust - believing in someone, when people have confidence in each other

mineral - a valuable or useful chemical substance which is formed naturally in the ground แร่
nutrient - a substance in food that plants, animals, and people need to live and grow ธาตุอาหาร solution - a liquid with something dissolved in it, "a solution is a homogeneous mixture composed of two substances. In such a mixture, a solute is dissolved in another substance, known as a solvent," The solvent does the dissolving" (See Wikipedia)
dissolve - to mix with a liquid and become part of the liquid ละลาย
mineral nutrient solutions - minerals mixed into a liquid, dissolved in a liquid

plantation (noun) - the act of planting crops
significant - large enough to be important or have an effect ที่สำคัญยิ่ง
harvest - gather in ripe crops เก็บเกี่ยว การเก็บเกี่ยวผลผลิต
contaminated - made dirty, polluted or poisonous by the addition of a chemical, waste or infection

fertiliser - food for plants, chemicals given to plants to help them grow ปุ๋ย (See Wikipedia)
recognisable - easy to recognize จำได้
guarantee - a promise that something will be done or will happen คำรับรอง, การประกัน (See glossary)

price tag - the paper or tag attached to products in a store that shows the price
higher price tag - means: costs more