Thaksin Shinawatra hasn't made his decision, so the Puea Thai party has still not elected its new leader. 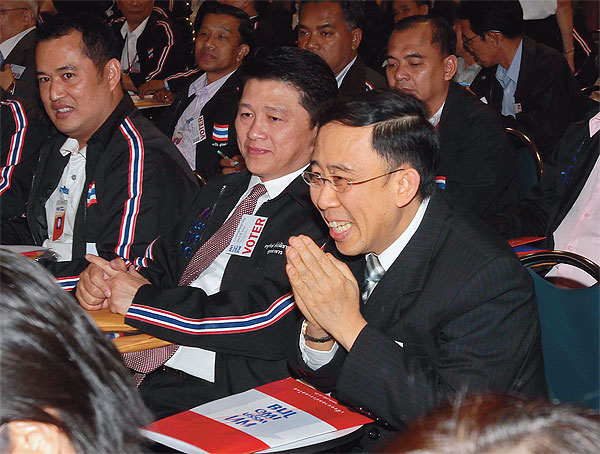 Mingkwan Saengsuwan, right, a Puea Thai Party list MP, greets members at a party meeting yesterday. He is among the top contenders to become the party’s new leader for the election. APICHIT JINAKUL

Puea Thai told time not yet right to pick leader

Ousted prime minister Thaksin Shinawatra has put a spanner in the works of an effort by a group of Puea Thai MPs to nominate former commerce minister Mingkwan Saengsuwan as the party's new leader at the annual general meeting yesterday, a party source says.

The move meant the party was unable to reach a conclusion on who its new leader would be.

Normally, the party leader would also become its candidate for prime minister.

The source said more members of the Shinawatra family would be joining Puea Thai to run in the next election.

The opposition party yesterday held its annual meeting at its headquarters off Phetchaburi Road in Bangkok.

It was earlier expected that the party would select its new leader and prime ministerial candidate at the meeting.

Initially, the group of MPs led by Mr Mingkwan planned to propose a restructuring plan as well as nominate Mr Mingkwan as new party leader and the party's candidate for prime minister.

There are about 60 to 80 MPs who support Mr Mingkwan, the source said.

However, Thaksin, who is the party's de facto leader, passed a message to the meeting blocking the group's plan saying it was not the right time to make a choice. The party could continue its activities under its current structure which would not cause it any harm.

Earlier, there had been speculation that Thaksin would choose between Mr Mingkwan and his sister Yingluck Shinawatra, considered an outsider to be the party's candidate for premier.

He said Ms Yingluck had not yet told him whether she was ready to be a candidate for prime minister.

party-list – a system that gives each party in an election a number of seats in relation to the number of votes its candidates receive ระบบสัดส่วน, ระบบปาร์ตี้ลิสต์
member – a person, a country or an organization that has joined a particular group, club or team สมาชิก
contender – someone who competes with other people for a prize or job คู่ต่อสู้, คู่แข่ง
dangle – to hang or swing freely ห้อยแกว่งไปแกว่งมา
leave dangling – to not tell someone what is going to happen or when it will happen, especially when they want to know very much
pick – to choose เลือก
ousted – forced out of a position of power ขับออกจากอำนาจ
put a spanner in the works – to do something that suddenly stops a process or plan ทำให้เสีย
nominate – to formally propose someone for a job เสนอชื่อ
commerce – trade, especially between countries; the buying and selling of goods and services  การค้าขายสินค้า, ธุรกิจการค้า (commerce minister รัฐมนตรีว่าการกระทรวงพาณิชย์)
party – an organized group of people who have similar ideas about the way in which a country should be governed, and who work together to try to persuade people to vote for them in elections พรรค การเมือง
annual – happening once a year ประจำปี
source – someone who gives information แหล่งข่าว
conclusion – a final decision การสรุป การตกลงขั้นสุดท้าย
candidate – a person who is trying to be elected ผู้สมัครรับเลือกตั้ง
deputy – a person whose rank is immediately below that of the leader of an organisation รอง
elder – older ที่อายุมากกว่า
adopted – legally part of a family which is not the one in which you were born into บุญธรรม
the opposition – the elected politicians who belong to the largest party which does not form the government พรรคฝ่ายค้าน
headquarters – the place where an organisation or company has its main offices สำนักงานใหญ่
select – to choose  คัดเลือก
initially – at first ในเบื้องต้น
propose – to suggest an idea for a group to consider เสนอ
restructure – to organise something such as a company in a different way so that it will operate better  ปรับโครงสร้างใหม่
de facto – in reality;  in fact อย่างแท้จริง, อันที่จริง, ตามความจริง
block – to use your power to stop something from being done or from succeeding กีดขวาง
current – of the present time ปัจจุบัน
structure – something that is built or put together from different parts โครงสร้าง
harm – damage ความเสียหาย
speculation – ideas or discussion about what might happen or has happened or why something has happened without having complete information การคาดการณ์
outsider – someone who does not belong to a particular group or organization บุคคลภายนอก
brother-in-law – the brother of your husband or wife, or the man who is married to your sister, or the man who is married to the sister of your wife or husband พี่เขยหรือน้องเขย