Speed laws are only enforced in Bangkok at over 110 kph, whereas the legal limit in safety conscious Singapore is 50 kph. 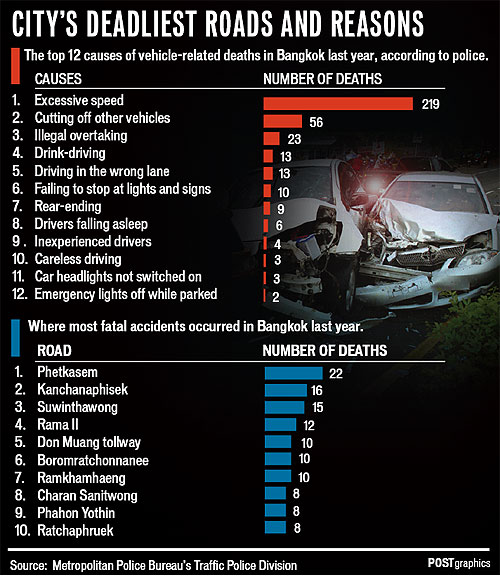 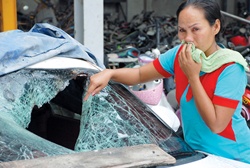 Two recent horrific road accidents have prompted city police to revive their campaign against speeding drivers to make the streets safer for motorists and pedestrians.

Metropolitan Police Bureau deputy chief Panu Kerdlarppol said policemen have had difficulties enforcing the speed limit. But he saw no other effective way to reduce senseless deaths than to force drivers to slow down.

He said the two recent accidents reaffirmed the need for city police to put new efforts into cracking down on speeding drivers.

In one of the accidents on Dec 27, eight people were killed after a passenger van they were riding in was hit by a passenger car allegedly speeding on the elevated Don Mueang tollway. The victims were thrown out of the van and fell to their death when the vehicle crashed into the tollway barrier after colliding with the car.

On Mar 25, a 19-year-old man was accused of driving his Porsche at speed into a Lao girl on Pathum Thani-Bang Bua Thong highway in Pathum Thani. The impact from the crash was so severe it cut the girl's body in half.

The drivers of the two cars - Orachorn Thephasadin Na Ayudhya and Peerapol Thaksinthaweesap - allegedly confessed to driving at high speed when the accidents took place.

Mr Peerapol reportedly admitted to police interrogators he was driving at 120 kilometres per hour when his Porsche ran into 17-year-old Kambai Inthilat.

Pol Maj-Gen Panu said this speed was allowed only on motorways.

The road on which the accident occurred was a highway where motorists are limited to 90 kph.

The driving speed in cities and municipalities is limited to 80 kph.

Pol Maj Gen Panu, who oversees road traffic in Bangkok, says most motorists refuse to comply with the limit

Police, therefore, have been lenient in enforcing the legal speed limit and make arrests only if motorists are found to exceed 110 kph, he said

The deputy police chief said the urban speed limit in Thailand was higher than that in other countries. Singapore, for example, has fixed the speed limit in the city at 50 kph.

He said, however, that the law alone could not make people aware of the importance of speed limits. People need to be educated to understand why speed limits are necessary.

A study on the land traffic law by the Thai Health Promotion Foundation explained why drivers had to slow down, he said.

The study also showed greater driving speeds resulted in a higher chance of road deaths. At 30 kph, pedestrians who were hit by cars had a 90% chance of surviving, but at 50 kph, they had an 85% chance of dying.

The study also said a speeding car needed a longer distance to stop when when braking.

Pol Maj Gen Panu said he believed the speed limit of 80 kph was still appropriate for most urban driving.

Although the number of road accidents in Bangkok last year dropped to 37,985 from 41,800 in 2009, police still needed to continue putting in more effort to control speeding drivers, he said.

Police work would be more efficient if they were better equipped with such devices as speed detectors and traffic cameras. Pol Maj Gen Panu said some countries set aside 10% from road construction budgets to buy these devices to help the police enforce traffic laws.

This was an idea that Thailand should consider following, Pol Maj Gen Panu said.

speed detector - a device used by police to measure how fast a person is traveling in their car, also known as a "radar speed gun" (See Wikipedia)
traffic camera - traffic enforcement camera, an automated ticketing machine, a camera next to or overlooking a road or highway that automatically recognizes and identifies number plates on cars and detects traffic regulation violations, including speeding, vehicles going through a red traffic light, unauthorized use of a bus lane...etc (See Wikipedia)

pedestrians - people who are walking, especially in an area where vehicles go คนเดินถนน

enforce - to make sure laws are obeyed
enforcing the speed limit - ใช้กำลังบังคับให้ปฏิบัติตาม, บังคับให้ทำ

violator - a person who breaks a law
lenient - not strict; not giving someone as strong a punishment as you could ลงโทษสถานเบา หรือให้ความเมตตา

traffic law - traffic regulations, rules of the road, laws and rules that drivers of cars and other vehicles must follow when they are driving on the road, if they don't they may get a ticket, pay a fine or even go to jail (See Wikipedia)
safety belt - seat belt, a belt or strap around the body of a passenger in the car, to prevent them from being thrown suddenly and injured if there is a sudden stop (See Wikipedia)

vehicle - a machine that you travel in or on, especially one with an engine that travels on roads, e.g., a car, bus, van, truck, etc. ยานพาหนะ
tollway  - a fast road or highway that drivers must pay money (toll) to drive on ทางด่วน, โทลล์เวย์
impact - the force with which one object hits another แรงกระแทก, แรงปะทะ

distance - the amount of space between two places, how far apart they are ระยะห่าง, ระยะทาง
brake (noun) - deviice in a car or other vehicle used for slowing down and stopping  เครื่องห้ามล้อ, เบรก
brake (verb) - the process of putting your foot on the break of a vehicle and slowing down or stopping ห้ามล้อ, เบรค, หยุด
velocity - speed  ความรวดเร็ว

cops - (slang) police shame (noun) - the feeling of embarassment and guilt that you have when you or someone else has behaved badly, disgrace ความอับอาย have no shame - do not feel embarassed or guilty when they act bad or see some other person acting badly

deputy -  the person whose rank is immediately below that of the leader of an organisation รอง, ตัวแทน,ผู้รักษาการแทน
limit - a highest or lowest amount
effective - works well, gets the job done, producing the result that was intended ได้ผลดี
senseless deaths - easily preventable deaths, deaths that didn't need to happen
force X to Y - cause X to do Y (and give them no other choice, so they must do it)
reaffirmed - say something important one more time (so that people know that it is important)
efforts - people trying to accomplish something, achieve a goal ความพยายาม
crack down - enforcing a law very strongly during a period of time

allegedly - claimed to be true, but not yet proven ที่ถูกกล่าวหา
victims - people who are killed injured or harmed in some way from an accident, natural disaster, crime, etc.
barrier - anything that prevents people from being together or understanding each other อุปสรรค
severe - very serious and worrying ที่รุนแรง ที่น่าเป็นห่วง

comply - obey and follow a rule or a law การปฏิบัติตามกฎ
refuse - not doing something, after you were asked to do it
refuse to comply - will not follow the rule or law (even though they are asked to)

urban - of or in a city or town ในเมือง, เขตเมือง
obsolete - not in use any more, having been replaced by something newer and better ล้าสมัย หมดยุคไปแล้ว
exceed - to be more than something; to go beyond a limit เกินกว่าที่กำหนด เกินปริมาณ
fixed X at Y - put X at level Y, set X at level Y
aware - knowing that something exists, or having knowledge or experience of a particular thing ทราบ

chance - the possibility or probability that some event will happen
effort - an attempt to do something ความพยายาม, the energy and enthusiasm that people put into an activity

efficient - producing a lot using few resources, doing a task with no waste of time, money or energy (produces a lot from few resources, achieves a lot using little resources)
construction - the work of building or making something, especially buildings, bridges, etc. การก่อสร้าง

role - what a person typically does in an organisation or activity, the purpose or influence of someone or something in a particular situation; function or job บทบาท
curb - stop or reduce ลดหรือยุติ, to control or limit something that is harmful ระงับ, ควบคุม
drive - a planned effort to achieve something การผลักดัน,ความพยายาม
confident - being certain of your abilities or of having trust in people, plans, or the future มั่นใจ