The story of Angulimala

Lead astray by his teacher he became a murderer and collector of severed fingers. He was reformed by the Lord Buddha after he attempted to murder him. 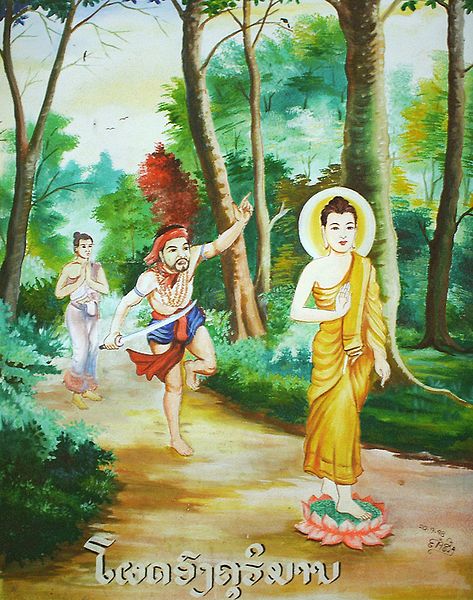 Read about the Angulimala Project in the UK to help inmates 'gone astray' (Read article).

The story of Angulimala by Venerable Ajahn Khemadhammo

The Buddhist scriptures relate that one day, after his meal, the Buddha went out from the monastery where he was staying and walked towards a great forest. Seeing him going in that direction, various people working in their fields called out to him to warn him that in that forest dwelt the dreaded Angulimala.

Little is known for certain about Angulimala but the usual account of his life has him the son of a well-to-do family and at one time a brilliant student at the University of Taxila, then the Oxbridge of India.

At Taxila, other students were jealous of him and succeeded in poisoning their teacher's mind against him, with the result that the teacher asked of him what he must have believed would be an impossible honorarium, a thousand human right-hand little fingers. Unbelievably, instead of giving up and quietly going home without graduating, the young man set out to collect the fingers and pay the fee. Presumably, he quickly discovered that people were reluctant to willingly give up their little fingers and so he was forced to resort to violence and killing in order to obtain them

Then he found he had nowhere to store these fingers. He tried hanging them on a tree but the birds stole them so his solution was to string them around his neck. For this gruesome and growing garland of bloody fingers he was given the nickname Angulimala, which means 'finger garland' or 'finger necklace'.

This was the man who, peering out from his lair, spotted the Buddha coming towards him and who that day had round his neck 999 little fingers. This powerful and athletic serial killer, who had already successfully resisted several attempts to apprehend him, grabbed his weapons and dashed out to murder the Buddha and complete his score.

He expected to easily overtake him and quickly finish the job but then a very strange thing happened even though the Buddha was only walking, serenely and unhurried, Angulimala, despite his formidable strength and speed, found he couldn't catch up with him. Eventually, exhausted, angry, frustrated and soaked with sweat, Angulimala screamed at the Buddha to stop.

Then the Buddha turned and with neither anger nor fear, speaking quietly and directly, he told Angulimala that he, the Buddha, had already stopped. He had stopped killing and harming and now it was time for him, Angulimala, to do likewise. Angulimala was so struck by these words that there and then he stopped; he threw away his weapons and followed the Buddha back to the monastery where he became a monk.

Later, the king, ignorant of what had happened, came by leading his troops out to arrest Angulimala. Being a very pious monarch, he called to pay his respects to the Buddha and to inform him of what he was up to. The Buddha asked the king what his reaction would be were he to discover that amongst this assembly of monks sat Angulimala.

To the king it was utterly unbelievable that such a foul and evil person could now be a Buddhist monk and seated amongst such exalted company, but were it the case, he answered, he would certainly pay his respects and make offerings. Then the Buddha stretched forth his right hand and pointed to where sat Angulimala.

When he'd mastered his fear and recovered from the shock, the king, having paid his respects, said to the Buddha how incredible it was that, "What we have tried to do by force and with weapons you managed to do without neither!" In the course of time, after a period of some trial to himself, Angulimala did eventually succeed in purging his mind of all greed, hatred and delusion and realised for himself the Buddhist goal of Enlightenment.

The story of Angulimala teaches us that the possibility of Enlightenment may be awakened in the most extreme of circumstances, that people can and do change and that people are best influenced by persuasion and above all, by example.

Angulimala - a story from the Buddhist scriptures on the redemption of a criminal, "the story illustrates "on the down side the danger of having great devotion to the wrong guru and on the up side the possibility of transformation for anyone. To fulfill his commitments under a perverse teacher, Angulimala murdered those unlucky enough to wander into his corner of the jungle on the outskirts of Sravasti. He killed 999 people and made a rosary out of their finger bones. He was prevented by the Buddha from killing his thousandth victim, which he believed would lead him to liberation. After his encounter with the Buddha, Angulimala was eventually able to purify his mind and become an arhat" (See  Wikipedia  and source).

Angulimala Project - the Buddhist prison chaplaincy in the UK, that for 25 years has made Buddhism available in UK prisons (See website and Bangkok Post article)
chaplain - a priest who works in a large organization or institution such as the army, a prison,
chaplaincy - an organization which provides religious and chaplian services to an organization inmates - people who live in jail, as punishment for crimes they committed   gone astray - to do something wrong or start behaving in a bad way all the time

scriptures - the holy writings of a religion คัมภีร์
Buddhist scriptures - the Pali Canon (Pali: Tipiṭaka; Sanskrit: Tripiṭaka) the texts considered sacred in Theravadan lineages of Buddhism (Thailand, Burma, Sri Lanka, Cambodia, Laos) written in the Pāli language, "the only completely surviving early Buddhist canon, and one of the first to be written down. It was composed in North India, and preserved orally until it was committed to writing during the Fourth Buddhist Council in Sri Lanka in 29 BCE, approximately four hundred and fifty four years after the death of Shākyamuni" (See Wikipedia)

monastery - the place where monks live (See Wikipedia on Thai temple art and architecture and Burmese Buddhist Temples)
dreaded - greatly feared and hated ที่น่ากลัว น่ากังวลสุดขีด
account - a written or spoken report about something that has happened บันทึกถ้อยคำ
well-to-do - rich, wealthy, have a lot of money
brilliant - very skilful, impressive, or successful ฉลาดหลักแหลม, ยอดเยี่ยม

University of Taxila - the most famous center of learning in ancient India located in modern Pakistan, this university is found often in the Jataka stories of the Buddha's previous births (See Wikipedia)

jealous - unhappy and angry because someone has something or someone you want หึงหวง, หึง
poisoning their teacher's mind - saying bad things about a person to their teacher (to make the teacher think poorly of them)
honorarium - a payment made for professional services (here: the teacher's fee that the student must pay)
give up - to stop doing something ยกเลิก, หยุดทำ, ละทิ้ง, เลิก, ยอมทิ้ง,  ไม่ดำเนินการต่อไปอีกแล้ว,
fee - an amount of money that you pay to be allowed to do something ค่าธรรมเนียม, ค่าตอบแทน, ค่าบริการ
reluctant - do not want to do something (so are slow, hesitate, or do without enthusiasm), not very willing to do something and therefore slow to do it ไม่เต็มใจ, ลังเลใจ
willingly - do it because you want to do it
violence - physical force with the deliberate intention of causing damage to property or injury or death to people ความรุนแรง

gruesome - involving or describing death or injury in a very unpleasant way น่ากลัว น่ารังเกียจ
garland - a circle made of flowers worn around the neck or head as a decoration พวงมาลัย
nickname - an informal name for someone or something, especially a name which you are called by your friends or family, usually based on your proper name or your character ชื่อเล่น

peer - to look very carefully at something (that is not easy to see)
lair - a hidden place, a place that cannot be seen, a hideaway ที่หลบซ่อน,  ที่ซ่อน
spotted - seen; noticed ปรากฏให้เห็น
murder - the crime of intentionally killing a person ฆาตกรรม
athletic - a person who is physically active, strong and good at sports
serial killer - a person who murders several people (one after another)
apprehend - catch a criminal suspect (a person believed to have committed a crime who will be put on trial and punished if found guilty)
dash - run quickly
dashed out - run quickly out of a place (here: out of the lair)
murder - the crime of deliberately killing another person  ฆาตกรรม, ฆ่า, สังหาร, ทำลายชีวิต
deliberately (adverb) - to do something on purpose (to want and intend to do something when you do it)

serene (adjective) - calm and peaceful
serenely (adverb) - done in a calm and peaceful way
unhurried - not moving or acting very quickly
X despite Y - X happened or was true (and X also, which is surprising, since if X is true then Y usually doesn't)
formidable - very strong and difficult to overcome and defeat (example: a formidable enemy)

exhausted - extremely tired เหน็ดเหนื่อย, เหนื่อยอ่อน
frustrated - feeling annoyed and impatient because you are prevented from achieving something ผิดหวัง,ท้อแท้ใจมาก
soaked with sweat - covered with sweat, clothes are wet with sweat
struck by these words - the words had a great effect on him (changed the way he thought)

ignorant - not knowing about
pious - strict in religious beliefs and practices
monarch - a king or queen กษัตริย์ หรือราชินี
pay his respects to Y - act in a way that shows that you respect person Y
inform - tell people about what happened, report new information to people who don't know about it yet
what he was up to - what he was doing
reaction - the way you behave or respond as a result of something that happens ปฏิกิริยาตอบโต้

foul - extremely unpleasant น่ารังเกียจ
pointed - direct, in a way that shows you are annoyed or do not agree with something ที่เด่นชัด

mastered - learned how to do something well, learn how to control something ทำจนชำนาญ
recovered - get better again, became fit and healthy again ฟื้นฟูร่างกาย
incredible - surprising or difficult to believe อย่างไม่น่าเชื่อ
force - strong and violent action กำลัง ความรุนแรง
period - a period of time
trial - a test, usually over a limited period of time, to discover how effective or suitable something or someone is การทดลอง, การทดสอบ
trial - testing it out (before making it permanent) การลองผิดลองถูก การทดลอง
eventually - at the end of a period of time or at the end of a process ในที่สุด
greed - a strong wish to have more money, things or power than you need ความโลภ
greed - the desire to have a lot more of something than other people, more than is fair ความโลภ
purge - remove
purge X of Y - remove Y from X
purging his mind of - remove from his or her thoughts
greed, hatred and delusion - the three defilements (afflictions, poisons, worldly desires, from the Pali language: kilesas), "mental states which temporarily cloud the mind and manifest in unskillful actions. Over time ...came to be seen as the very roots of samsaric existence" (See Wikipedia)
realised - achieved ทำให้เป็นจริง

extreme - much more severe or serious than usual ที่ร้ายแรงมาก, ที่รุนแรงที่สุด
circumstances - situation, conditions in which we live
persuasion - talking to a person to make them do something that you want them to do
influenced by persuasion - when someone made you do something, talked you into doing something
feature - to include someone or something as an important part ทำให้เด่น