Where the Songkran topless teens learned to dance 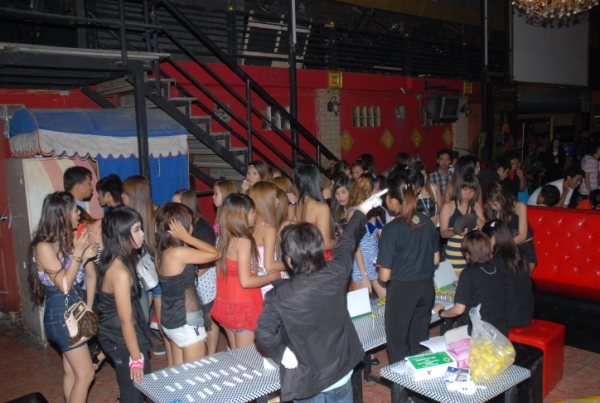 Photo above of another police raid on a nightclub last year, the Scan Pub on Ratchadaphisek Road, that found 619 of the club's 800 customers were underage.

NAKHON PATHOM : The head of a police station in Sam Phran district has been moved to an inactive post after a raid at a nightspot turned up more than 300 underage patrons.

Drugs police and officers from the Office of Public Sector Anti-Corruption Commission raided the Full Moon Pub on Phetkasem Road at around 3am yesterday.

Police checked the identity cards of the revellers and found over 300 were aged under 18. Five of them tested positive for drugs.

The operators of the nightspot had charged the underage drinkers a 100 baht entrance fee.

The youngest customer was only 14 years old, said Sangsoon Kanasutr, commander of Narcotics Suppression Division 1, who led the raid.

Three teenage girls, who danced topless  before a crowd of Songkran revellers on Silom Road last Friday, tipped off police about the pub.

The dancing incident was widely reported on television and the internet.

The girls, who surrendered to police on Monday night, said they joined a party at the pub, which offered a promotion of free meals and drinks for women who were prepared to dance topless there.

The Full Moon Pub owners were charged with violating opening hours laws and allowing underage drinkers on the premises.

Pol Lt Gen Phongsan Chiem-on, commander of Police Region 7, yesterday ordered the transfer of Pol Col Passakorn Klanwan, chief of Pho Kaew police station, which is responsible for the area where the pub is located.

He will be stationed at Police Region 7 headquarters for 30 days.

A committee has been set up to find out why local police failed to take action against the pub operators and whether they took bribes.

A local politician, whose name has not been not disclosed, is believed to own the pub which has been open for just one year.

Juvenile Observation and Protection Department director-general Tawatchai Thaikaew said the five minors who tested positive for taking a restricted substance would be sent to the department's Ban Metta home.

The rest of the young clubbers were sent home, he said.

raid - when police enter a place by force suddenly searching for illegal activities or goods ใช้กำลังเข้าค้นสถานที่หรือ จับกุมคนร้าย, บุกเข้าจับ, การเข้าตรวจค้น, การบุกเข้าจับกุม
police station - the central building or headquarters for police operations in a district or neighborhood of a city
moved to an inactive post - removed from his position and put in another position in which he has no duties or responsibilites (then an investigation and hearing will decide what to do with him)

nightspot - a night time entertainment place (venue)
underage - under the legal agae to be in a place such as a bar or nightclub
patrons - customers ผู้อุปการะ, ผู้อุดหนุน

identity - who a person is, all the things and features that identify them (height, weight, hair color, nationality, etc)
identity cards - the official government issued card that proves that you are legally Thai and shows your age and other personal details
check identity cards - when the police look at id cards to make sure a person is not breaking the law

revellers - people having fun at a party
tested positive for drugs - took a drug test which showed that they had been taking drugs recently
drug testing - testing the blood, urine, sweat or saliva to check whether some drug that is illegal or breaks the rules has been taken (See Wikipedia)

operators - companies operating a business
fee - an amount of money that you pay to be allowed to do something ค่าธรรมเนียม, ค่าตอบแทน, ค่าบริการ
commander - a police offer of high rank ผู้บังคับบัญชา
narcotics - illegal drugs (heroin, cocaine, speed, mephamphetamines, majrijuana, etc...)

suppress (verb) - to end some activity (here: an illegal activity); to prevent activity from continuing
suppression (noun) - the activity or process of ending or preventing some activity

surrender - when a person wanted by the police for a crime, gives themselves to the police
promotion - a special deal (in which you can buy something cheap or get it for free)
complaints - when people say there is something wrong and they want it changed
premises - the buildings and land that a business or organisation uses ที่ดินและสิ่งปลูกสร้าง
transfer - to move someone or something from one place, vehicle, person or group to another ย้าย
transfer - moving an employee to a different part of the organisation to work
headquarters - the place where an organisation or company has its main offices กองบัญชาการ, สำนักงานใหญ่
local - in or related to the area that you live, or to the particular area that you are talking about ท้องถิ่น
bribes - money or a present given to someone so that they will help you doing something dishonest or illegal สินบน

juvenile - related to children
minors - children, not yet legally an adult (therefore cannot go to certain places or do certain tihngs that are limited to adults)
restricted - limited or controlled ซึ่งถูกยับยั้ง, ซึ่งถูกควบคุม
restricted substance - an illegal drug (for example: heroin, cocaine, marijuana, etc)
metta - the word love directed towards fellow human beings in Pali (not romantic love between men and women)
clubbers - people at a nightclub (having fun, having a party)