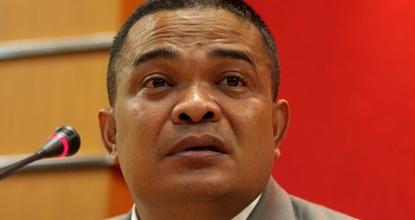 Pheu Thai looks likely to have lost one of its best campaigners as Jatuporn has his bail withdrawn by the Criminal Court. 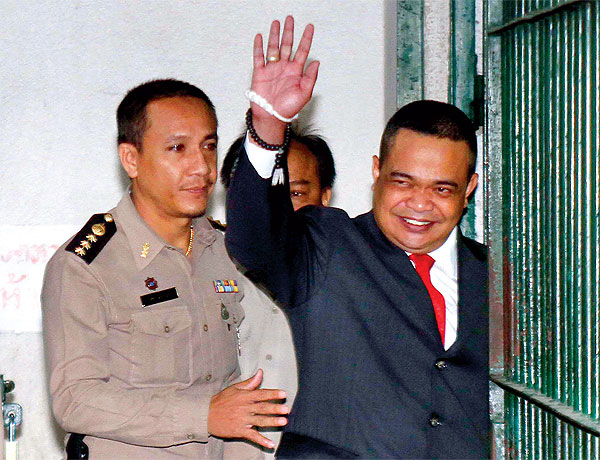 The withdrawal of bail for former Pheu Thai MP and core red shirt leader Jatuporn Prompan will deal a serious blow to the opposition party in the run-up to July elections.

Several party members have agreed the party's election campaign will be tougher without Mr Jatuporn.

"We are at a disadvantage. There is no one better than Mr Jatuporn in communicating with red shirt supporters," said Paichit Sriworakhan, a former MP for Nakhon Phanom.

Chalerm Yubamrung, a potential candidate in the (party) list system, said the party campaign will be adversely affected. Mr Jatuporn is known for his rhetorical skills and ability to discuss political issues.

"That means more work for me," Mr Chalerm said.

However, some former party MPs are hoping that the case would shore up the sympathy vote for the party.

"Those who are not red shirts may sympathise with us," said former MP for Bangkok Anudit Nakhonthap.

The withdrawal of bail for Mr Jatuporn and another red shirt Nisit Sintuprai is not expected to affect the planned rally on May 19 to mark the first anniversary of clashes between red shirt protesters and soldiers at Ratchaprasong Intersection.

Red shirt leaders have insisted that the rally is still on and urged supporters to remain calm and not to play into the government's hands.

Wiputhalaeng Pattanaphumthai, a core member, said that revoking bail was an attempt to provoke red shirt supporters with the aim of preventing the election from taking place.

"Mr Jatuporn wants us to be calm. Any violence will play into their hands," he said. Mr Wiputhalaeng said red shirt leaders would meet today and discuss their next move.

According to the Criminal Court ruling, Mr Jatuporn and Mr Nisit violated their bail conditions when they made remarks deemed offensive to the monarchy during the red shirt rally last month.

The Department of Special Investigation sought to revoke bail for nine red shirt leaders recently released from jail after being charged with terrorism stemming from the unrest in the capital in April and May last year.

However the court found there were no adequate grounds to withdraw bail from the other seven.

"The remarks of the [two] defendants may cause confusion and lead to chaos. Their acts were dangerous and a threat to national security," the court said.

After the ruling, their lawyers submitted fresh bail applications for temporary release. The bail request was denied.

Mr Jatuporn and Mr Nisit were whisked off to Bangkok Remand Prison immediately after the Criminal Court revoked their bail to prevent a possible commotion.

About 200 red shirt supporters showed up at the court to give their leaders moral support amid tight security.

Six companies of police from the Metropolitan Police Division 2 and a commando unit from the Crime Suppression Division were deployed.

Some red shirt members gathered on the road, forcing the prison vehicle carrying Mr Jatuporn and Mr Nisit to change the route.

Bangkok Remand Prison was flooded with visitors yesterday as the facility will be closed during the public holiday from May 13 to 17.

The visit proceeded without any incidents. Several red shirt supporters wept and told Mr Jatuporn to fight on.

The prison also intensified security around the facility with the deployment of 200 anti-riot police at the front gate as red shirts swarmed the facility.

Once inside, Mr Jatuporn wore a blue T-shirt, not brown prison clothes prepared by the prison.

"He was detained before but it was for a couple of days. This time it is not known how long he's going to stay," he said.

You can read the full story here: http://bit.ly/lVkdMh