See, hear and read what Thaksin Shinawatra said in his interveiw with our sister publication Post Today at his home in Dubai.

Start with the video for a shortened version of the interview. The text below is a longer version and you can read the full interview here: http://bit.ly/mF0Jpd

How is your health?

Touch wood, I've never had anything. Staying overseas, when you contract anything, even just a cold, you recover quite quickly. I don't have diabetes, I have no heart problems, no gout, my cholesterol is 160. Everything is fine.

How confident are you that Pheu Thai will win the election?

Based on our own polling, we are quite confident of victory. Our analysis shows that Pheu Thai remains the largest party today, with the largest number of MPs in parliament, after counting the fact that some have been lured away to other parties or blocked from office.

But when you move parties, it's only the candidates that move. The electoral base and support for Pheu Thai remains. The chance that we will win these constituencies again remains strong.

And the Democrat Party has to understand that their performance hasn't been obvious. People can remember what the Democrats have done. What they can remember best is the eggs-by-the kilogramme policy. I think the chance that the Democrats will see their support increase is small. It can only fall. Fall a lot or fall a little remains to be seen.

So we feel that Pheu Thai should win. By how much, we'll just have to wait and see.

It's possible if the voter turnout is high and there is no fraud.

How do you see the stability of the next government?

It depends whether all organisations abide by the rules. If everyone accepts the idea of reconciliation and returns to principles of neutrality, of justice, of the rule of law, then the country can move forward with reconciliation.

But if the justice system itself doesn't abide by the rule of law, then things will be bad.

Will there be a lot of vote-buying in this election?

It will be heavy, for certain. But first, let me insist that Pheu Thai has no policy to buy votes. No one has the money to buy votes either. We aren't a party that uses a lot of money. We use the least amount of money of any party.

The coalition parties have a lot of money, a lot of income. We're talking 20 million baht for provincial governors to 700,000 to 800,000 baht for district chiefs. And there's the 30% taken from procurement projects and local administration budgets. The money is there for the taking. So people spend [in the election] in the hopes of coming back to steal once again.

What's important is that state officials have to be neutral. Politicians come and go, but the bureaucrats stay until they retire. 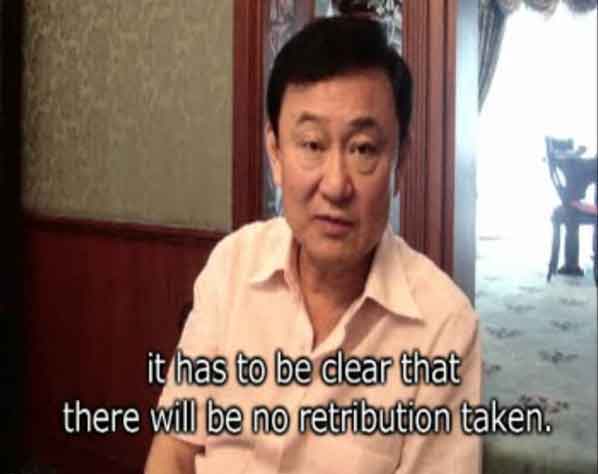 After the election, will we see peace in the country?

Pheu Thai itself has to be clear in its position that it desires national reconciliation. The country can achieve reconciliation only after certain steps. Before the election itself, all parties, in particular state officials responsible for overseeing the election process, must allow the election to be held fairly.

This is a precondition for reconciliation.

Second, after the election, after Pheu Thai wins, it has to be clear that there will be no retribution taken. Those who have suffered, forgive and forget and look forward together to the future.

Other agencies, whether they be independent agencies or legal authorities, have to be fair to all parties. They must stop the past practices of taking sides.

Are you afraid of a [coup]?

No. I am quite sure that everyone loves the country, although many might love themselves a bit too much. But I think that ... the country has suffered enough. No one wants to see more suffering.

Will the [political] problems be solved after the election?

How can you explain the resentment and conflicts [between you and the monarchy]?

There isn't any. It's been twisted. If you look at what I have done, for the country and for the institution, then you would know that I am a loyal [subject].

Will you take revenge against your enemies?

No. There is no point. Retribution only breeds more resentment, more enemies. Life will have no peace. If you know how to let things go, then you can have peace.

Some have expressed fear about the return of Thaksin.

There's nothing to fear. I am a Buddhist. I am from the North. I am a former prime minister. I won't hurt anyone. I won't cause damage to the country.

Today my life overseas is quite comfortable. Wherever I go, I am well respected and well received. But I love Thailand and am concerned for the country and the people. I am also concerned for all the people who have come out to ask for justice for me.

How can you explain the violence that took place in the past by the red shirts?

The red shirts aren't dangerous. They aren't violent. But they have been provoked.

They have suffered and they have been provoked. You might remember back to the Pattaya unrest [in April 2009] when these blue shirt people used slingshots and used guns against the red shirts.

When you are provoked, eventually you fight back.

In the King Power case, or even the CentralWorld fire, it's obvious. If the red shirts set the fire, it would have been much smaller, since they didn't have the tools or the expertise. But the bombs and the soldiers, well, it's obvious. The pictures tell the story.

Unfortunately, today the media, in particular television, are under the control of the state, so we only hear one side. The public should consider this carefully. But I want to state again that we were the injured party.

When will you return to Thailand?

Everything has to be according to the law. And the law isn't for the benefit of any one person. It has to further the cause of reconciliation, for the entire system. If I happen to benefit from that, well, that's normal. I was one of many victims. But everything has to be based on the law.