Exactly one year after a military crackdown ending the red-shirt protest, much remains to be done to bring about reconciliation. 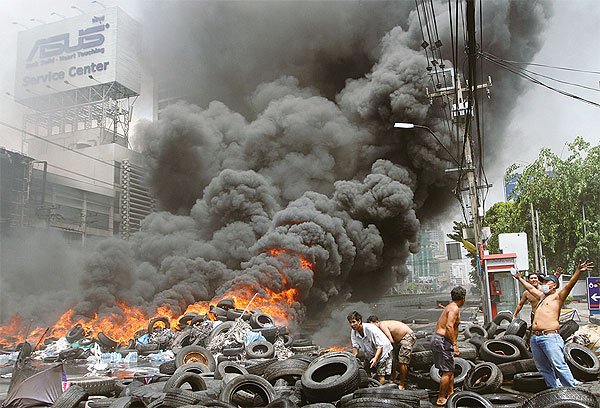 BEFORE: Protesters burn tyres on Rama IV Road in an attempt to slow down the progress of the army. JETJARAS NA RANONG

A year after the May 19 crackdown, more than 130 red shirts who resisted the military are still behind bars. Their bail requests have been repeatedly denied by the courts

Most of the detainees, especially those in the northeastern provinces of Mukdahan, Ubon Ratchathani and Udon Thani, were charged with arson of state properties.

About 800 red shirts were arrested nationwide and most of them were gradually released due to lack of evidence. 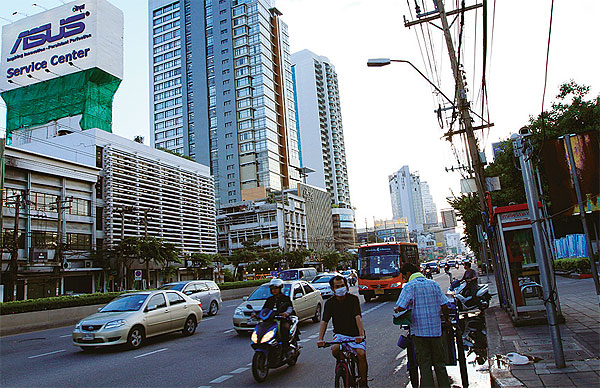 AFTER: Little trace of the stand-off which took place on this road and other main arteries around town remains. PATIPAT JANTHONG

A total of 175 people nationwide including Bangkok were charged under the emergency decree with acts of violence and other criminal charges including terrorism. Of those, five were released after serving jail time, and 35 were released on bail.

Based on accounts given to the Truth for Reconciliation Commission of Thailand, most detainees could be bystanders.

Police and prosecutors have told the courts that many of the suspects were arrested on the basis of photographic evidence only.

Anond Nampha, a lawyer for the Rasadorn Prasong's Jurist Group, a volunteer lawyers' group helping the accused, said relatives of the detainees would travel to Bangkok to petition the Office of the Attorney-General today to have the cases withdrawn.

"As the country is in the election mode and gearing towards reconciliation, relatives of the detainees are hoping their call for a good-will gesture will receive attention," said Mr Anond.

Further prosecution of small cases related to the unrest would not do any public good, the lawyer said.

The plight of grassroots red-shirts has attracted little attention from the public at large. "If they are granted bail, they could prepare themselves to fight those charges. That means they could defend their basic rights better," he said.

Most detainees faced multiple charges. The charges concerning damaging state properties and arson have proven to be the most complicated and lengthy.

The bail set for these red shirt detainees is high – 500,000 baht on average.

Mr Anond said while the UDD and Pheu Thai party have said they are willing to act as guarantors, the courts have denied the red shirts' requests for bail.

"Detainees in provinces face greater difficulties as they are often the main earners of low-income families.

Their detention was a real catastrophe for their dependents, young or old," he said.

Winai Pinsinchai, 33, a street vendor, spent eight months in prison and was released on bail a few months ago.

During the first few months of his detention in Mukdahan, he felt so stressed that he tried to commit suicide by swallowing liquid fabric softener.

The father of two still has to take stress-relief pills.

"I've heard voices in my head. Sometimes I'm scared to be among people. But overall, it's a lot better now than being in the cell.

"All I did was roll a few tyres around to protest against the crackdown in Bangkok. Why did they arrest me for arson?" he asked.

Mr Winai said some people set state properties on fire, while others tried to calm them down. "I was among those who tried to talk to the mobs. But there were so many people and I was tired.

"I returned to my daily chores – buying cooking gas for my wife and delivering kluay thod to a shop near Lotus [superstore.]

"When I went back to the scene, it was already in flames," he said.

Mr Winai did not feel he had been abandoned by the UDD or Pheu Thai. "They could not offer the detainees direct assistance, because they may face further state action.

His wife was understanding and stood by him. "Some detainees were abandoned by their wives," he said.

Mr Winai plans to join the Bangkok rally to mark the event today. "I joined the red shirt protest in Bangkok last year too. I do not like double standards. I hate injustice. I feel I still have to fight against it even now," said Winai.

"They can lock up my body but they cannot put a lock on my soul," he said.

protester – someone who shows that they disagree with something by standing somewhere, shouting, carrying signs, etc  ผู้ต่อต้าน, ผู้ประท้วง
recover – to become normal and healthy again ฟื้นฟูสภาพ
linger – to last a long time, especially of something bad อ้อยอิ่ง
crackdown – strong action that someone in authority takes to stop a particular activity การปราบจลาจล
resist – to oppose or fight against someone or something ต่อต้าน
behind bars – in prison การจำคุก
deny bail – (of a court) to not to allow someone to go free on bail ไม่ให้ประกันตัว
detainee – someone who is kept in prison  ผู้ที่ถูกกักขัง คุมขัง
charge – to accuse someone officially of committing a crime ตั้งข้อกล่าวหา
arson – the illegal use of fire to destroy a house, building, or property; an arsonist is a person who commits arson การลอบวางเพลิง
state – government รัฐบาล
property – land owned by someone ที่ดิน, อสังหาริมทรัพย์
release – to allow someone to go free ปล่อยตัว
lack of – when there is not enough of something  ขาด
evidence – facts statements or objects that help to prove whether or not someone has committed a crime หลักฐาน
trace – a very small amount of something remaining ร่องรอย
stand-off – a disagreement or fight in which neither side can do anything to win การทะเลาะวิวาท ความขัดแย้ง
artery – an important road, railway, or river เส้นทางหลัก
nationwide – throughout a whole country  ทั่วทั้งประเทศ
charge – to accuse someone officially of committing a crime ตั้งข้อกล่าวหา
emergency decree – a situation where the government takes on special powers in a dangerous situation and the rights of the people are often limited in some way ประกาศภาวะฉุกเฉิน
violence – physical force with the deliberate intention of causing damage to property or injury or death to people ความรุนแรง
terrorism – the use of violence to achieve political aims การใช้ความรุนแรงเพื่อข้อเรียกร้องทางการเมือง
account – a written or spoken report about something that has happened  บันทึกถ้อยคำ
reconciliation – a new and friendly relationship with someone who you argued with or fought with การทำให้ปรองดองกันอีก,  การสมานฉันท์
commission – a group of people who have been formally chosen to discover information about a problem or examine the reasons why the problem exists คณะกรรมการ, คณะกรรมาธิการ
bystander – a person who is standing near and watching something that is happening but is not taking part in it ผู้เห็นเหตุการณ์, ผู้สังเกตการณ์
prosecutor – a lawyer whose job is to prove in court that someone accused of a crime is guilty อัยการ
suspect – a person who is thought to have committed a crime ผู้ต้องสงสัย
arrested – caught by the police and taken to a police station because you are believed to have committed a crime ถูกจับกุม
on the basis of – the reason why people take a particular action เหตุผล
jurist – a person who is an expert in law นักกฎหมาย
volunteer – of someone who is not paid for the work that they do อาสาสมัคร
lawyer – an attorney ทนาย
the accused – defendant; someone who has been accused of a crime and is on trial จำเลย
relative – a member of your family ญาติพี่น้อง
petition – to ask someone in authority to do something ยื่นคำร้อง
Attorney-General – the top legal officer in some countries, who advises the leader of the government อัยการสูงสุด
withdraw – to take away ถอน
mode – a particular way of feeling or behaving แบบนิยม,แฟชั่น,สมัยนิยม
gear –  to prepare something for an activity or event  เตรียม (บางสิ่งเช่น เครื่องจักร) ให้พร้อมสำหรับ
gesture – a movement that communicates a feeling or instruction ลักษณะท่าทาง
unrest – angry or violent behaviour by people who are protesting or fighting against something สถานการณ์ที่ไม่สงบ
public good – for the benefit of people in general  ผลประโยชน์ส่วนรวม
plight - an unpleasant condition, especially a serious, sad or difficult one สภาพเลวร้าย
grassroots – involving the ordinary people rather than their leaders ในระดับรากหญ้า, ชาวบ้าน
the public – people in general ประชาชน, สาธารณชน, มหาชน
at large – in general โดยทั่วไป
grant – to give ให้
right – a moral or legal claim to have or get something or to behave in a particular สิทธิ
multiple – many มากมาย
complicated – difficult to deal with, do or understand  ซับซ้อน
average – an amount calculated by adding several amounts together, finding a total, and dividing the total by the number of amounts เฉลี่ย, ค่าเฉลี่ย
guarantor – a person who agrees to be responsible for somebody or for making sure that something happens or is done  ผู้ค้ำประกัน
earner – a person who earns money for a job that they do ผู้มีรายได้
catastrophe – an extremely damaging event เหตุร้ายกาจม ความหายนะ
dependant – a child or other relative to whom you give a home, food, and money  ผู้อยู่ในอุปการะ
vendor – someone who sells something, but not in a shop พ่อค้าแม่ค้าแผงลอย
stressed – affected by pressure, worry, etc. วิตกกังวล
suicide – the action of deliberately killing yourself การฆ่าตัวตาย
swallow – to make food or drink go from your mouth down through your throat and into your stomach กลืน
fabric – cloth, especially when it is used for making things such as clothes or curtains
relief – help for improving a bad physical condition or a bad situation ผ่อนคลาย, บรรเทา
cell – a small room where a prisoner is kept ห้องขังนักโทษ
crepe – a thin pancake ขนมชนิดหนึ่งคล้ายแพนเค้กแต่บางกว่า, เครป
native – someone who was born in a particular place ชาวพื้นเมือง
calm – to cause to be peaceful and quiet; without anxiety ทำให้ใจเย็น,ทำให้ไม่ตื่นเต้น, ทำให้สงบ
mob – a large crowd of people, especially one that may become violent or cause trouble ฝูงชนที่กำลังสับสนอลหม่าน, ฝูงชนวุ่นวาย
chores – jobs which are often boring or unpleasant but need to be done regularly งานบ้าน
scene – site; a place where something happens or happened สถานที่เกิดเหตุ
flame – the brightly burning gas that you see coming from a fire เปลวไฟ, เปลวเพลิง
abandoned – left alone by someone who is supposed to stay with or look after you  ถูกปล่อยทิ้งไว้
core leader(s) – the most active or most  important members of a group แกนนำ
terrorism – the use of violence to achieve political aims การใช้ความรุนแรงเพื่อข้อเรียกร้องทางการเมือง
rally – a large public gathering of people to support someone or to protest against something การชุมนุม
mark – to show respect for or to remember ระลึกถึง
double standard – a rule or standard of good behaviour which, unfairly, some people are expected to follow or achieve but other people are not สองมาตรฐาน
injustice – failure to treat someone fairly and to respect their rights ความไม่ยุติธรรม
soul – the spiritual part of a person or thing วิญญาณ