War on drugs, without extrajudicial killing

This time all parties are renouncing the mass-killing of Thaksin's war on drugs in their anti-drug policies. 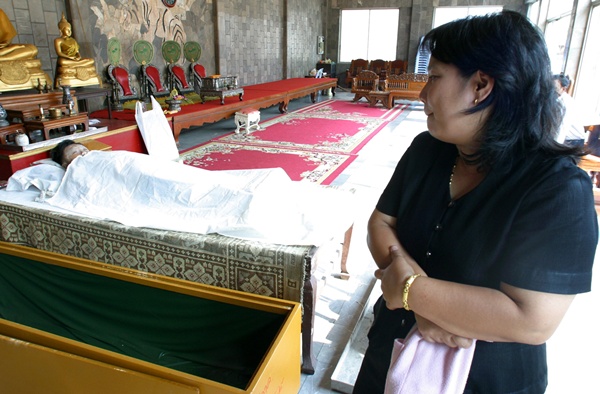 For more information on the alleged 1,300 to 2,700 extrajudicial killings of 2003 mentioned in the letter, see the US State Department 2003 Human Rights Report for Thailand and an insightful academic paper by Michael Connors on the killings.

In short, the "war on drugs" began with lists of drug suspects drawn up by local police and government officials. Targets were then set for arrests and seizures with bonuses for police and removal from position if targets were not met. Starting from February 1st 2003 "the nightly television news opened with clip after clip of prone dead bodies." At the end of three months 2,637 had been killed with the police claiming that almost all the deaths were drug dealers killing other drug dealers to prevent them from giving information (silencing killings). As Chulalongkorn professor Dr. Pasuk Phongpaichit and her co-author and husband, historian Dr. Chris Baker observe: "...the line dividing police and professional gunmen is so thin as to be nonexistent. Some police (and military) moonlight as professional gunmen. Others retire to this profession. Some senior officers run gangs of gunmen. The police sometimes hire outside help in cases which are difficult to manage by normal police methods, or which are simply unlikely to be monitored" (Thaksin, Second Edition, 2009, Pasuk Phongpaichit and Chris Baker, Silkworm Books, page 162).

Read another recent article on this subject here.

Read the story of another family that still does not know what happened to their grandmother here.

Also read about the first case in which the DSI has charged police for the murders that characterised the notorious 'war on drugs' (See June 6th article).

In the photo above, Sunan Yindee, 38, looks at the body of Chakkapan Srisa-ard, her nine-year-old nephew killed by police gunfire during a drug arrest. This is the death that received the most high-profile coverage by the media.

The two main political parties have pledged not to resort to violence against drugs users and dealers if they win the July 3 election and form a government.

The Democrat Party and its rival Pheu Thai yesterday came out with similar anti-drugs policies where their parties paid equal attention to both prevention of drug use and suppression.

Speaking at the Bangkok Post Forum entitled "Crime and Drugs Control Policy", they also said drug problems have been a major source of violent crimes and no matter which party wins the poll and forms the next government, drugs will be at the top of the national agenda.

But serious doubts remain over the effectiveness of the policy and a possible recurrence of extra-judicial killings. About 2,500 people were allegedly killed during former premier Thaksin Shinawatra's war on drugs between 2003 and 2004.

Apirak Kosayodhin, the director of the Democrat Party's Bangkok election campaign, who oversees the Democrats' crime and drugs control policy, said his party would stick to justice and the rule of law and not use any form of violence against those involved in drugs.

Mr Apirak said the Democrats would focus on both drug prevention and suppression. Among prevention activities, reducing the demand for illicit drugs would be emphasised.

Sports fields and facilities would be built in every community to keep children and youngsters away from drugs and many more closed-circuit TV cameras would also be installed in narcotics-plagued areas to prevent the spread of drugs and other forms of crime, he said.

"If there is no demand for drugs, there will be no drug trafficking problem and the spread of drugs won't happen," he said.

Mr Apirak said the party would also provide rehabilitation for drug users and treat them as patients.

As for suppression, he said if the party was given a chance to administer the country for four more years, a 2,500-strong drug task force would be set up to work with the military, the Office of the Narcotics Control Board and the police.

He said his party had floated the idea of setting up the drugs task force because the country was facing a shortage of anti-drugs personnel.

However, Pheu Thai questioned the effectiveness of the proposed anti-narcotics task force, saying the way to permanently suppress the drugs problem was to seek cooperation from all stakeholders in society.

Chalong Somjai, a former commissioner of Provincial Police Region 1 and Pheu Thai's legal adviser on crime and drugs control policy, said his party would also not resort to any violence against those involved in drugs.

Pol Lt Gen Chalong said when he was police commissioner during Thaksin's war on drugs he had never received any order to silence drug suspects. Those allegedly involved in drug trafficking-related deaths had already been investigated.

Only a few people were found to have been involved, he said.

He added that if Pheu Thai can take the helm of government, drug traffickers and dealers would be brought to justice while narcotics prevention would also be promoted.

More permanent checkpoints in Bangkok's neighbouring provinces would urgently be set up to detect drug trafficking because these provinces - Samut Prakan, Pathum Thani and Nonthaburi - were used as drug storage points, he said.

He said his party would discuss the drug problem with neighbouring countries, asking them to help suppress narcotics production and arrest Thailand's most wanted drugs fugitives such as Surachai, alias Bang Ron Ngernthongfu.

He said his party would set up a centre to locate about 20,000 criminals, especially drugs offenders who had jumped bail, whom the the party believed might still be involved in the drugs trade.

All laws related to the seizure of drug assets would be implemented strictly, he said.

As for prevention, he said his party would promote alternative development projects in risky remote areas, and drug-free areas in schools, night entertainment places, communities and dormitories.

"The drugs problem will disappear within one year if we run the government," Pol Lt Gen Chalong said.

war on drugs - a three month period in 2003 during the Thaksin Shinawatra adminstration in which as many as 2700 extrajudicial killings are estimated to have taken place, originally "The War on Drugs" was a "highly controversial campaign of prohibition and foreign military aid being undertaken by the United States government, with the assistance of participating countries, intended to both define and reduce the illegal drug trade, and to combat leftist political movements" (See Wikipedia on US foreign policy initiative)
extrajudicial killing - when people are killed without trial by the government, by soldiers or police, for example (See Wikipedia)

crackdown - a period of increased enforcement of a law

pledged - seriously promised to do something สาบาน
election - the process of choosing a person or a group of person for a position, especially by voting elect (v) electoral (adj) synonym: the polls การเลือกตั้ง

rival - a person you are competing against or opposing, opponent คู่แข่ง

entitled - having the right to have or do something มีสิทธิโดยชอบ
source - the place or person something comes from or starts at, or the cause of something ต้นกำเนิด, แหล่งกำเนิด

agenda - list of goals to achieve in the future; program, plan, schedule กำหนดการ  (also: list of things to be discussed in meeting: วาระ, ระเบียบวาระ )

doubts - things that you feel uncertain about and question whether something is really true, uncertainties
serious doubts remain - people still not willing to believe (because they have important unanswered questions)
effectiveness - working well and producing the results intended

policy - a plan of action to guide decisions and achieve outcomes (See Wikipedia) นโยบาย
recurrence - การเกิดขึ้นอีก,การกลับมาอีก
allegedly - claimed to be true, but not yet proven ที่ถูกกล่าวหา
premier - prime minister

stick to - continue doing something (not change)

justice - fairness in the way people are dealt with, when people are treated fairly and equally (See Wikipedia) ความยุติธรรม
brought to justice - when a criminal is arrested, tried, proved to have done a crime and then punished

rule of law - a state of order that conforms to the law; a legal system in which rules are clear, well-understood, and fairly enforced, including property rights and enforcement of contracts, people cannot avoid the law by getting help from powerful friends (See Wikipedia and Google Definitions)

focus - the main thing you are concerned with ให้ความสำคัญ  think about and work on one thing (rather than waste time on many), concentrate time and attention on one thing
demand - the need and desire to buy goods and services by households and businesses
illicit - against the law ผิดกฎหมาย

facilities - the buildings, equipment and services provided for a particular purpose สิ่งอำนวยความสะดวก
community - the people living in one particular area ชุมชน

closed-circuit TV cameras (CCTV) - cameras that record what is happening in a place, can be replayed if there is a crime to see what happened (See Wikipedia)

narcotics - illegal drugs such as heroin or cocaine ยาเสพย์ติด
plagued - caused a lot of problems for someone or something for a long period of time ทำให้ยุ่งยาก ลำบากมานาน
spread - to (cause to) cover, reach or have an effect on a wider or increasing area or number of people กระจายไปทั่ว to gradually affect or cover a larger area แพร่กระจาย

provide - to give someone something that they want or need
rehabilitation - the process of returning someone or something to a good or healthy condition, state or way of living การทำให้กลับสู่สภาพเดิม, การทำให้กลับมาดีเหมือนเดิม
treat X as Y - consider that X is
undergo - to experience something which is unpleasant or which involves a change ประสบ (เหตุการณ์ในด้านลบ)
treatment - the process of providing medical care การรักษา

floated the idea - suggested an idea (for other people to think about, consider and possibly accept)

shortage - when there is not enough of something การขาดแคลน
personnel - people who work for a company or organisation
proposed - suggested (but not yet chosen or decided upon), presented as a possible project
permanently - for all time in the future อย่างเป็นการถาวร

stakeholders - people who are affected by an action, responsible decision making requires consideration of the effects on all stakeholders, laws protect the interests of some stakeholders more than others (See glossary) ผู้ถือหุ้น ผู้ได้รับผลประโยชน์, ผู้ที่ได้รับผลกระทบจากการตัดสินใจ (See Wikipedia)

suspects - people who may have committed the crime, identified by the police ผู้ต้องสงสัย

promoted - take action to increase something (example: promote the product to potential customers, promote use of the new drug among doctors)
permanent - happening or existing for a long time or for all time in the future ถาวร
urgently - needing to be dealt with immediately อย่างเร่งด่วน
detect - to find or prove that something is present using scientific methods พบว่า to notice, to discover or find out พบได้, สังเกต

locate - to find where something is หาทำเล,หาที่ตั้ง
bail - money that is given to a court when someone is allowed to stay out of prison until their trial. If they do not return for the trial, the court keeps the money เงินประกัน; การประกันตัว (See Wikipedia)

alternative - another possible way, different from the usual ways ตัวเลือก / ทางเลือก
development projects - projects in areas with poor people with the goal of making an area develop economically and pulling people out of poverty

risky - involving the possibility of danger, harm or failure เสี่ยงอันตราย
remote - far away from cities, difficult to get to ไกล ที่ห่างไกลจากความเจริญ (ของเมือง)
dormitories - large buildings where many students live together while going to school or university