Facing death if caught, for a measly 5,000 baht, drug mules swim across the Mekong river from Laos with loads of methamphetamines. 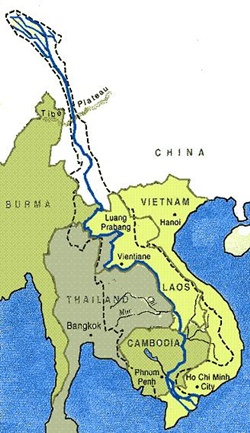 Illegal drug smuggling along the Mekong River is growing rapidly with "mules" wearing special shoes and swimmers who carry guns and bombs.

Along the natural border between Thailand and Laos the US Drug Enforcement Administration is now engaged on a new battlefront to stem the flow of illegal substances.

The US DEA has been working in Thailand for years to counter the upsurge in drugs - especially methamphetamine, ice (crystal methamphetamine) and cannabis - smuggled into America from certain Asian nations through Thailand, concentrating mainly along the Burmese border and the Golden Triangle.

"These days, ya ba [methamphetamine] has become a growing problem in the US ... and it is best to tackle the drug problem at its origin,"said Sombat Chao, a US DEA special agent.

The tough crackdown on drug trafficking along the Thai-Burmese border has forced the traffickers to find alternative routes along the Thai-Lao border, said Pol Col Thanachai Phianchang, chief of Sub-Division 10 of the Marine Police Division, who oversees drugs suppression along the Mekong River in Nakhon Phanom, Ubon Ratchathani, Amnat Charoen and Mukdahan provinces.

The drugs are smuggled into Laos first and then spirited across the Mekong River into Thailand, said Pol Col Thanachai who is responsible for tackling the drug smuggling problem along the Thai-Lao border from Mukdahan down to Ubon Ratchathani

The frequency of drug smuggling from Laos into Thailand is growing quickly. The most common form of smuggling tactics is to put methamphetamine tablets in a pair of shoes modified to hide the drug.

Another drug smuggling tactic is to swim across the river and drop the drugs on the Thai bank.

This tactic is far more difficult to detect and intercept as the traffickers chose isolated wooded areas to drop off the drugs where other traffickers collect them.
The Lao traffickers are very experienced at swimming across the fast-running river, said Pol Col Thanachai, adding that traffickers usually use a plastic oil container to help keep them afloat.

They normally work in teams of at least five members who each get about 5,000 baht to traffic drugs, he said.

Khemarat district of Ubon Ratchathani is seen as a "red zone" for drug trafficking from Laos. This district is opposite Songkhone district of Savannakhet province in Laos.

Ban Tha Prachum, a Lao village in Songkhone district, directly opposite Khemarat district, has become one of the largest spots for the storing of drugs waiting to be trafficked into Thailand, said Pol Col Thanachai.

Pol Lt Col Sanya Phumphothong, head of the 4th marine police checkpoint of Division 10 in Khemarat district, said the fight against drug trafficking there goes on around the clock.

By day, police officers are stationed at the border pass to search travellers upon their arrival for drugs that may have been hidden somewhere in their bodies or luggage.

By night, the marine police are also responsible for intercepting drug traffickers who swim across the river - a much more difficult task that cannot be accomplished without accurate information from informants.

Equipped with night vision telescopes, the marine police wait in hiding to grab anyone they see swimming across the river.

It's a difficult and dangerous task as these traffickers would rather die than be arrested.

They no longer carry only a gun but also a bomb. They are well aware that they face the death sentence if arrested, so they may think they have nothing to lose by clashing with the Thai authorities," said Pol Lt Col Sanya.

methamphetamine - an illegal drug that is a stimulant; commonly sold as tablets, known in Thai as "yaa baa" (See Wikipedia and Google Definitions)

cannabis - marijuana; the most commonly used illegal drug; considered a soft drug, it consists of the dried leaves of the hemp plant; smoked or chewed (See Wikipedia)

Golden Triangle - the area on the Thai border famous for drug production and transportation, the place where the three countries Thailand, Burma and Laos meet, China is not too far away also; the largest nearby town is Maesai, Chiang Rai (See Wikipedia)

Mekong river - the world's 12th longest river starts in the mountains of China, forms the natural border between Thailand and Laos (See Wikipedia)

seize (verb) - grab; take hold of something quickkly, firmly and forcefully
seizure (noun) - the act of taking hold of something by force drug seizure - when the police find and take hold of a large amount of illegal drugs stored at a place
a measly 5,000 baht - the very small amount of 5,000 baht
drug mules - a person who smuggles something illegal across a national border or on an international plane, smuggling gangs employ mules to "reduce the risk of getting caught themselves, while often profiting most. The mule typically gets paid an amount which is small compared with the profit, but large for somebody with little money, so that it seems to him or her like an easy way to make money" (See Wikipedia)
load - a quantity of some object moved or transported from one place to another
a load of methamphetamines - a quantity of the illegal drug methaphetamines

natural - found in nature (not made in a factory by humans) ตามธรรมชาติ
border - the official line separating two areas, regions or countries เขตแดน อาณาเขต
natural border - rivers, mountains, lakes, oceans that separate two countries (this kind of "border" is easy to see and understand)

engaged - actively involved in what you are doing

battlefront - the place where two armies contact each other and fight a battle in a war
stem - to stop something from increasing or spreading หยุดยั้ง,ยับยั้ง,สกัด

concentrating - directing your efforts towards a particular activity, subject or problem

tough - difficult to do or to deal with ยาก ยากลำบาก

alternative - another possible way, different from the usual ways; another choice ตัวเลือก / ทางเลือก

marine - relating to the sea เกี่ยวกับทะเล (sea, ocean, and boats; here boats are operating along a river)
marine police - the police who operate with boats on bodies of water (rivers, sea, lakes)

checkpoint - a place where people are stopped and questioned and vehicles are examined, especially at a border between two countries ด่านตรวจ

task - a piece of work that someone does; a responsibility; work a person must do หน้าที่; ภารกิจ

equipment - the things used in some activity such as a job or a hobby อุปกรณ์ (equipment: a shovel is part of the equipment of a farmer used to dig holes when needed)
equipped with ... - having the equipment ...

aware - knowing that something exists, or having knowledge or experience of a particular thing ทราบ
well aware - know very well, completely know

authorities - government officials; the police or people in official organisations who have the legal power to make people obey laws or rules เจ้าหน้าที่ (ตำรวจ หรือผู้มีอำนาจ)