Cervical cancer is the 2nd most common cancer among women in Thailand: 10,000 new cases each year, 14 women dieing each day. 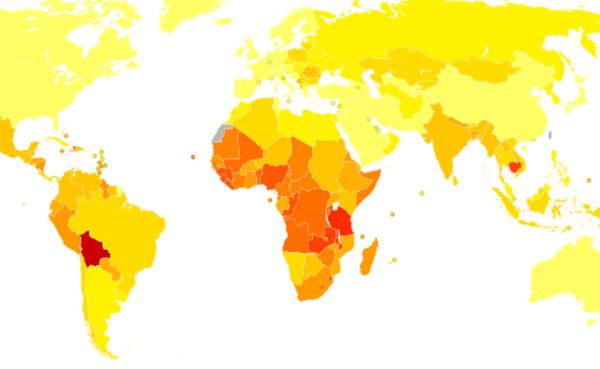 A March to fight cervical cancer will be again held in Pattaya on August 13. Call 02-716-6442 for more information.

As can be seen from the map above, Thailand has less of a problem than some other countries. (Key to the map below to the right.)

Photo below on the right of the human papillomavirus (HPV) that causes cervical cancer. 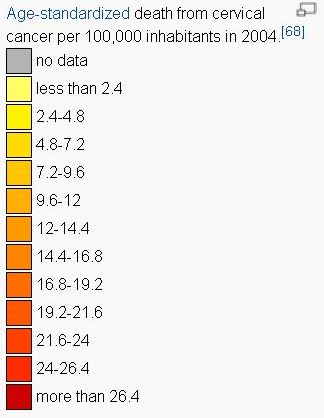 Cervical cancer, a disease in which malignant cells form in the cervix, is one of the most preventable types of cancer. Although a screening programme using the Pap smear test has decreased the number of cases and deaths over the past 20 years, many women still develop cervical cancer.

According to the National Cancer Institute (Thailand), cervical cancer is the second most common cancer among women in this country. It is estimated that there are almost 10,000 new cases each year, and almost 14 women die of this cancer each day.

Cervical cancer usually develops quite slowly over time. The cells of the cervix go through a series of changes to become abnormal, a process called dysplasia. It may go away without treatment, but if dysplasia persists and is left untreated the cells may become cancerous. Although symptoms like abnormal vaginal bleeding and discharge should alert most women that they need to consult a gynaecologist, early abnormal cellular changes can occur without any symptoms and may not be noticed until they become more severe.

The most common cause of cervical cancer is infection of the cervix with human papillomavirus (HPV). Of the more than 80 types of HPV, about 30 types can infect the cervix and about half of these have been linked to cervical cancer. Although cervical infections are common, only a very small number of women develop cervical cancer. HPV is spread mainly through sexual contact. Although such infections can occur in any woman, those who become sexually active at a young age and who have many sexual partners run a greater risk of contracting infections and developing cervical cancer.

HPV infection may be prevented by simply avoiding important risks. Refraining from sexual activity will greatly decrease the risk. But if you are sexually active, simply limit the number of sexual partners you have and always use a condom for protection against HPV and other diseases.

A vaccine has been developed and approved for preventing infections by the two types of HPV that cause the most cervical cancer. It is effective in about 70 to 80% of cases and the protection it provides can last for six to eight years. The vaccine does not protect those who are already infected with HPV, however, so it is most effective when given to women before they become sexually active. 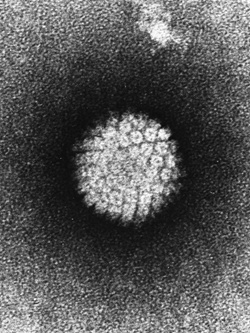 While the vaccine is helpful, regular pelvic exams and Pap smear tests are still the best defence against cervical cancer. A Pap smear tests can detect early changes in cells before they turn cancerous. Experts still recommend that women have a yearly check-up, so it would be best to make it part of your routine. Similar to other cancers, the earlier cervical cancer is detected, the greater the chance of curing it.

Smoking increases your risk of developing many cancers, including cervical cancer. Smoking combined with an HPV infection can actually accelerate cervical dysplasia. Your best bet is to kick the habit.
COME JOIN THE FIGHT

The Thai Gynecologic Cancer Society, led by Dr Chaiyod Thirapakawong, is an organisation at the forefront of the fight against cervical cancer in Thailand. To follow up on the success of last year's effort, the March to Fight Cervical Cancer will be again held in Pattaya on August 13.

The event is intended to raise public awareness about the disease and provide accurate information on ways to prevent it. There is no charge for joining the march and everyone is welcome to take part. Call 02-716-6442 for more information.

cancer (noun) - "any malignant growth or tumor caused by abnormal and uncontrolled cell division; it may spread to other parts of the body through the lymphatic system or the blood stream" (See Wikipedia and Google Definitions)
cancerous (adjective)

malignant - "the tendency of a medical condition, especially tumors, to become progressively worse and to potentially result in death" (See Wikipedia) tumour - "a swelling or enlargement caused by overgrowth of cells within the body or any organ of the body" (See Wikipedia and Google Definitions)

treatment - the process of providing medical care การรักษา
process - a series of actions that you take in order to achieve a result แนวทางปฏิบัติ, กระบวน, วิธีการ

cervical cancer - a cancer in the cervix area of women, "Human papillomavirus (HPV) infection is a necessary factor in the development of almost all cases of cervical cancer." (See Wikipedia)

Human papillomavirus (HPV) - a virus that transmitted from one person to another during sex, can cause warts and certain kinds of cancers (See Wikipedia)
Human papillomavirus vaccine - a vaccine that "may prevent infection with certain species of human papillomavirus associated with the development of cervical cancer, genital warts, and some less common cancers" (See Wikipedia)
vaccine - an injection that helps a body fight and resist a disease, "a biological preparation that improves immunity to a particular disease. A vaccine typically contains an agent that resembles a disease-causing microorganism, and is often made from weakened or killed forms of the microbe or its toxins. The agent stimulates the body's immune system to recognize the agent as foreign, destroy it, and "remember" it, so that the immune system can more easily recognize and destroy any of these microorganisms that it later encounters" (See Wikipedia)

abnormal - not usual or typical ผิดปกติ ไม่ธรรมดา
dysplasia - the enlargement of an organ or tissue by the growth (proliferation) of abnormal cells, can be an early stage in the development of cancer, also called a "malformation" or "abnormality of development"  (See Wikipedia)

malignant cells - cancer cells, when cells grow out of control and are likely to cause death if not stopped

vagina (noun) -  when a child is born, the passageway through which the child leaves the body of the mother and enters the world ช่องคลอด (See Wikipedia)
vaginal (adjective) - having to do with the "vagina"

discharge - to send out a substance, especially liquid or gas ปล่อยออก, ขับออก
vaginal discharge - when some substance comes out of the vagina (sign of disease)

spread - to (cause to) cover, reach or have an effect on a wider or increasing area or number of people กระจายไปทั่ว, แพร่กระจายไปทั่ว
disease spreads  - the disease passes from people sick with the disease to other people (they come in contact with)
contact - touching or coming close to or near to สัมผัส

risk - danger, how likely or possible it is for a bad event that causes harm and damage ความเสี่ยง
run a risk of Y - get in a situation or do something that is dangerous (with risk)
contract an infection - get an infection, get infected with a disease
run a greater risk of contracting infections and developing cervical cancer - make it more likely to get the disease cervical cancer

effective - works well, gets the job done; producing the result that was intended ได้ผลดี

pelvis (noun) - the hip bone; the part of the body that connects the spinal chord to the legs กระดูกเชิงกราน (See Wikipedia and Google Images)
pelvic (adjective)
pelvic exam - when a gynaecologist checks the pelvis area of a woman for any medical problems (See Wikipedia)
regular pelvic exams - having a "pelvic exam" every year or two years (how often your doctor orders)

detect - to find or prove that something is present using scientific methods พบว่า to notice, to discover or find out พบได้, สังเกต
detect cervical cancer - find out if you have cervical cancer or (hopefully) not

recommend - to advise someone that they should do something แนะนำ

habit - usually a "bad habit" such as smoking, drinking a lot, picking your nose, scratching your butt, not zipping your pants, etc
kick the habit - stop doing the "bad habit" (example: stop smoking, stop drinking or at least drink in moderation)

at the forefront of - among the people most advanced in an activity (trying the hardest; making the greatest effort)
at the forefront of the fight against cervical cancer - among those people working hardest to fight the disease cervical cancer
effort - an attempt to do something; the energy and enthusiasm that people put into an activity ความพยายาม

provide - to give someone something that they want or need
accurate - correct, exact and without any mistakes ถูกต้อง, แม่นยำ
provide accurate information - give people information that is plain, simple and true (no marketing glitz, advertisement, trying hard to persuade by only presenting one side of the story)