Areas upstream are being hit hard as Bangkok residents are warned to prepare for possible flooding of the Chao Phraya river. 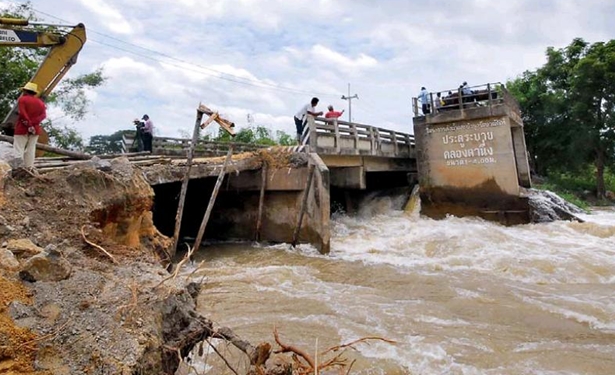 Workers hurry yesterday to repair a bridge connected to a sluice gate which was damaged by raging floods in Bang Ban district of Ayutthaya. THITI WANNAMONTHA

Water runoff from the North is threatening Bangkok as overflow from the Chao Phraya River has flooded part of Bang Pa-in district in Ayutthaya.

The district is adjacent to Pathum Thani, to the north of Bangkok. The flood front, which yesterday forced traders in Bang Pa-in's old market to relocate, is expected to arrive in the capital soon.

The flood level in the market and a riverside community was measured at 50 centimetres yesterday and is expected to rise to one metre in the next few days.

More water runoff continues to pass through the Chao Phraya Barrage in Chai Nat with the rate expected to increase to 3,900 cubic metres a second early next week. This flow rate can put riverside communities in the downstream Chao Phraya, including Bangkok, at risk of inundation, said interior deputy permanent secretary Chomchuen Bunyanuson.

Ayutthaya has already been partly hit by floods. The situation worsened yesterday in Bang Ban district when a sluice gate in Khlong Tanueng collapsed, causing a large amount of water to flow into 50,000 rai of paddy fields. The sluice gate is connected to the Noi River, a subsidiary of the Chao Phraya.

Most of the harvesting has been done in the fields, and they will serve as a water retention area in the rainy season.

Villager Somchit Sawangkit wanted officials to quickly fix the gate as the water is flooding a traditional Thai house made of teak logs. He was worried the entire house would be washed away by the strong currents.

Ayutthaya is among 23 provinces which are struggling against floods.

According to the Interior Ministry, more than 760,000 people have been affected by floods countrywide.

A total of 83 people have died and three are still missing in the flood disaster, the ministry said.

You can read the full story here: http://bit.ly/ncvSeX

repair – to fix something that is broken or damaged ซ่อมบำรุง
sluice gate – a gate that can be opened or closed to control the flow water along a passage ประตูน้ำปิดเปิดบังคับการไหลของน้ำในคลอง
raging – happening with a lot of force or violence รุนแรงมาก
concern – a worry ความกังวล
suffer – to be badly affected by a very difficult or unpleasant situation ประสบความลำบาก
collapse – to fall down suddenly พังลงมา  ล้ม
runoff – rainfall that cannot be taken in by the soil and which flows into rivers, lakes or the sea ปริมาณของเหลวที่ไหลออก
threaten – to be likely to harm or destroy something เป็นลางร้าย
overflow – (of a river or body of water)  flooding the land next to it การไหลล้น
adjacent - very near, next to, or touching ติดกัน
relocate – to move someone or something to another place โยกย้ายประชาชนออกจากบริเวณ
level – the amount of liquid that there is in a container, river, dam, etc., which can be seen by how high the liquid is ระดับ
rate – the level or speed at which something happens or changes, or the amount or number of times it happens or changes in a particular period อัตรา
flow – (of a liquid) to move continuously in one direction ไหล
community – the people living in one particular area ชุมชน
downstream – in the direction that a river or stream is flowing ตามกระแสน้ำ
at risk – in danger ตกอยู่ในความเสี่ยง
inundation – flooding น้ำท่วม
deputy – a person whose rank is immediately below that of the leader of an organisation รอง
disaster – something very bad that happens and causes a lot of damage  ความหายนะ
situation – all the circumstances and things that are happening at a particular time and in a particular place  สถานการณ์
paddy field – a field planted with rice growing in water นาข้าว
subsidiary – a smaller river connected to a larger one
harvest – to gather in ripe crops  เก็บเกี่ยว
serve – to be useful to somebody in achieving or satisfying something ทำหน้าที่เป็น
retention – the act of keeping or storing something การเก็บ
traditional – things (buildings, clothes, music, customs, etc.) that have been part of a country or society for a long time แบบดั้งเดิม, เป็นประเพณี
teak – a large tree with hard yellow-brown wood and white flowers ต้นสัก, ไม้สัก
current – a strong movement of water in one direction กระแสน้ำ
struggle – to try hard to do something that you find very difficult พยายาม
missing – (of a person) not present after an accident, natural disaster, battle, etc. but not known to have been killed ไม่พบ,หายไป, สูญหาย