Why invest in Thailand?

Investor confidence is essential to attract investment. Many investors have had second thoughts after recent policy changes. 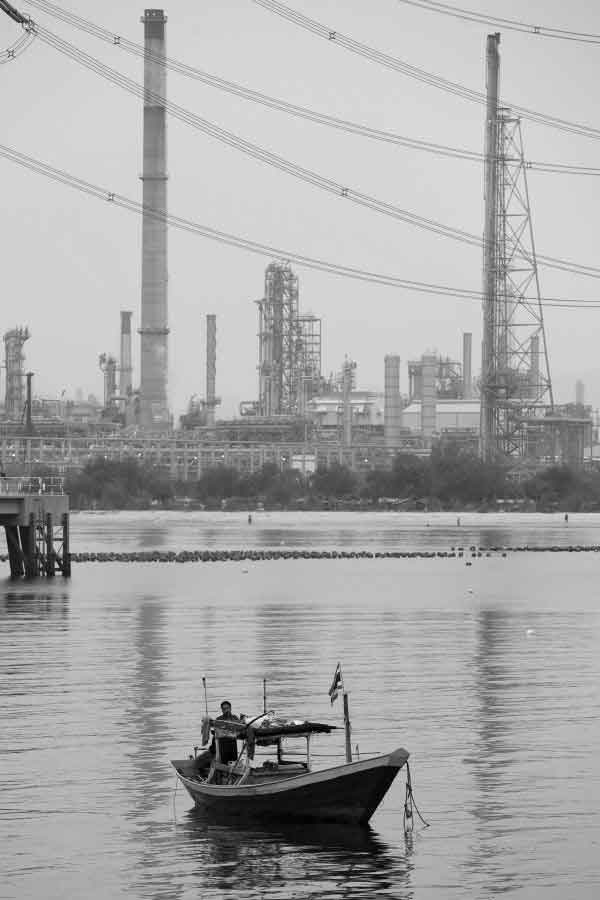 Photo of Map Ta Phut industrial estate that has large foreign investments and was also shut down for a long period of time, giving some investors second thoughts about investing in Thailand (Photo: AFP  - Nicolas ASFOURI).

INVESTMENT: Walter Bau case ultimately a plus by Nareerat Wiriyapong

Thailand's ongoing court case against Germany's Walter Bau AG will have a positive impact on investor confidence and give the government second thoughts about changing regulations that affect foreign investors' rights in the kingdom, says a leading law firm.

Instead of focusing on the negative sentiment the case created, partners at Baker & McKenzie see the legal dispute between the Thai government and the bankrupt German construction firm as setting a standard in terms of foreign investment protection.

The case stems from a Thai government contract with the German builder more than 20 years ago to build and operate a tollway to Don Mueang airport.

Courts ruled that the Thai government breached several contractual obligations and must pay US$42 million it owes the company.

The case became a major diplomatic incident earlier this year when the liquidators of Walter Bau seized a passenger jet belonging to His Royal Highness Crown Prince Maha Vajiralongkorn in Germany in order to enforce their claim. The jet was subsequently released when it was established that the Crown Prince and not the Thai government was the plane's owner.

"The Walter Bau case has brought about positive results because the firm won the case against the Thai government," said Wynn Pakdeejit, a partner in the dispute resolution group at Baker & McKenzie.

Anything that affects investment protection, if the government breaches, it has to pay the compensation.

The Walter Bau case was applied under bilateral investment treaties between Thailand and Germany.

Such agreements between two countries cover promotion and protection of investments in each other's territory by companies based in either country.

Thailand has signed such agreements with 40 countries, including Germany, China, England, Canada, South Korea, Laos, Cambodia, India, the Philippines and Indonesia. Of the total, 35 have come into effect, according to the United Nations Conference on Trade and Development data as of June 1 this year.

A number of incidents in recent years raised concerns about investment protection in Thailand, such as the political protests that led to temporary closures of international airports and the Ratchaprasong intersection.

Thus far, no cases have been initiated by foreign investors under the treaties, said Mr Wynn.

Even so, some international investors have approached Baker for consulting related to investment protection. Pisut Attakamol, also a Baker partner, said the Walter Bau case could be a lesson for the Thai government about major policy backtracking.

"The case indicates that before a significant change of policy, the government should have a second thought," Mr Pisut said.

Thailand has seen some recent policy changes by the government concerning foreign investments, led by policies to promote ethanol production and eco-cars.

The Map Ta Phut impasse, which prompted a court ruling to halt operations of 76 industrial projects in Rayong on environmental grounds, is a major concern of foreign investors here.

At the same time, Thai companies should be aware of protection under bilateral investment treaties before investing abroad.

Large Thai corporations have been spreading out their investments overseas. There are also growing investments in neighbouring countries such as Laos, Cambodia and Vietnam.

Walter Bau case - 20 years ago Walter bau was hired to build and operate a tollway to Don Mueang airport in Thailand, German courts ruled that the Thai government broke the construction contract and must pay the company US$42 million
Walter Bau case ultimately a plus - in the end, positive results from the case

ultimately - finally, after a series of things have happened ท้ายที่สุด, ตอนสุดท้าย, ในที่สุด
in the end - same as "ultimately"

investor - a person or organisation that puts money into a company in exchange for a future profit นักลงทุน
confidence - trusting and believing in something, being certain or sure of something ความมั่นใจ
investor confidence - when investors feel sure that their investment money is protected from fraud, cheating or sudden unpredictable policy reversals

firm - a business or company บริษัม
law firm -  "a business entity formed by one or more lawyers to engage in the practice of law. The primary service rendered by a law firm is to advise clients (individuals or corporations) about their legal rights and responsibilities, and to represent clients in civil or criminal cases, business transactions, and other matters in which legal advice and other assistance are sought" (See Wikipedia)
leading law firm - one of the largest and most important international law firms
partners  - partners at a law firm, top lawyers at the firm, who also own a part of the firm

Baker & McKenzie - an international law firm, with more than 3,800 lawyers spread over more than 69 offices in 41 different countries, the lawyers come (See Wikipedia)

partners at Baker & McKenzie - "Law firms are typically organized around partners, who are joint owners and business directors of the legal operation; associates, who are employees of the firm with the prospect of becoming partners; and a variety of staff employees, providing paralegal, clerical, and other support services. An associate may have to wait as long as 9 years before the decision is made as to whether the associate "makes partner." Many law firms have an "up or out policy" ... associates who do not make partner are required to resign and join another firm, go it alone as a solo practitioner, go to work in-house in a corporate legal department, or change professions (burnout rates are very high in law)" (See Wikipedia)

investment - taking your money and putting it into projects to make a profit or earn interest (buying stock shares, bonds, real estate)
foreign investment protection - laws that protect foreigners when they invest money outside their own country

X stems from Y - Y caused X, X was caused by Y
contract - a written (or oral) agreement that is legally binding สัญญา

obligations - things you must do; duties หน้าที่ที่พึงกระทำ ข้อบังคับ (such as debts, liabilities, money that must be paid in the future to another person)
breached several contractual obligations - did not do what they promised to do in the contract

diplomatic - relating to relations between countries เกี่ยวกับการทูต
incident - an unpleasant event
diplomatic incident - "a seemingly relatively small or limited action or clash that results in a wider dispute between two or more nation-states. International incidents can arise from unanticipated actions involving citizens, government officials, or armed units of one or more nation-states, or out of a deliberate but small provocative actions by espionage agents of one nation-state, or by terrorists, against another nation-state," also called an "international incident" (See Wikipedia)

liquidation - "the process by which a company (or part of a company) is brought to an end, and the assets and property of the company redistributed ...
Liquidation may either be compulsory (sometimes referred to as a creditors' liquidation) or voluntary (sometimes referred to as a shareholders' liquidation, although some voluntary liquidations are controlled by the creditors, see below)" (See Wikipedia)
creditor - a company or person that your company owes money to (borrowed money from them, have not paid back yet)

legal claim - a request for money that you believe you have a legal right to (from a company, the government or other organization)
enforce their claim - when a court and the police take away assets (to support your legal claim)

compensation - money that someone receives because something bad has happened to them, money paid for damage or loss that you caused caused (as a penalty for breaking agreement, for example) การจ่า่ยเงินชดเชย

territory - an area of land controlled by a particular country, leader or army อาณาบริเวณ อาณาเขตประเทศ

incidents - events which are either unpleasant or unusual เหตุการณ์

protests - meetings, sometimes forceful or violent, or public statements by people who strongly disagree with something ชุมนุมประท้วง
political protests

intersection - a place where roads, lines, etc., join or cross each other สี่แยก
Ratchaprasong intersection

consulting - giving expert advice on a subject (for example: how to run a business or how to build a building) หารือ

ethanol - "ethanol (ethyl alcohol) is the same type of alcohol found in alcoholic beverages, it can be used as a fuel, mainly as a biofuel alternative to gasoline, and is widely used in cars in Brazil, because it is easy to manufacture and process, and can be made from very common materials, such as sugar cane, it is steadily becoming a promising alternative to gasoline throughout much of the world" (See Wikipedia)

impasse - obstacle; when progress cannot be made, cannot move forward (because none of the people involved are willing to change their decision) ทางตัน
Map Ta Phut impasse - the closing of the Map Ta Phut industrial estate south of Bangkok (1. before the court closed the industrial estate there was an "impasse" because local people did not get their pollution problems resolved; 2. after the closing it took a year for some resolution to be reached and the industrial estate reopened; 3. even after the reopening, it is not clear whether all stakeholders, both locals and factories, are satisfied)

stability - not changing suddenly and unpredictably; a situation in which things happen as expected without a lot of surprising changes (impossible to plan for in business) ความมีเสถียรภาพ ความมั่นคง

effective - works well, gets the job done; producing the result that was intended ได้ผลดี
enforcement - making sure a law or rule is obeyed and punishing people if it is not obeyed บังคับใช้กฎหมาย
effective enforcement - when enforcement is not enough to make people obey the law (the typical "crackdowns" from time to time mean that people continue to break the law, because they are unlikely to get caught)

aware - knowing that something exists, or having knowledge or experience of a particular thing ทราบ
corporations - a large company (registered with the government as separate legal entity, owned by many shareholders) (See Wikipedia)