Victims and relatives of victims of the Santika pub fire seemed satisfied with the Criminal Court verdict but all agreed that no one could replace their losses. 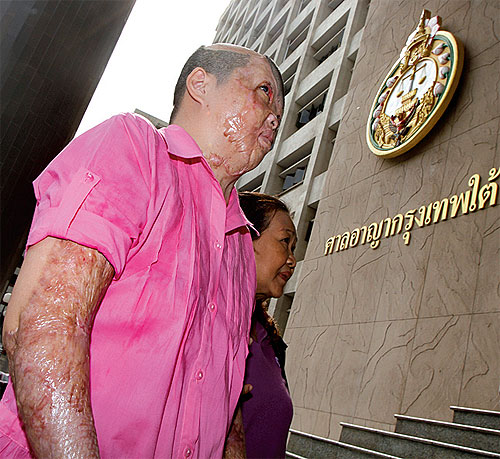 Rattana Saelim, a victim of the Santika club fire, arrives at Southern Bangkok Criminal Court, where Santika executive Wisuk Setsawat and Boonchu Laosenat, an executive of Focus Light Sound System Co, were jailed for negligence over the fatal blaze that razed the club in Ekamai Soi 9 in the first minutes of Jan 1, 2009. SOMCHAI POOMLARD

Santika executives get 3-year terms for deaths of 66 patrons 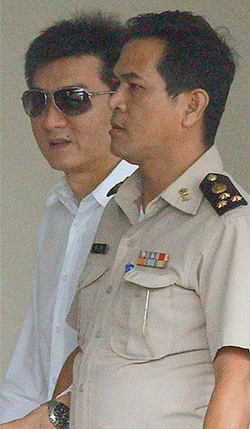 Santika executive Wisuk Setsawat is escorted into the Criminal Court of Southern Bangkok yesterday. He was sentenced to three years in prison for the deadly fire inside his nightspot on New Year’s Eve 2008. SOMCHAI POOMLARD

The court found Wisuk, Focus Light Sound System Co, and Boonchu guilty of negligence leading to the deaths of 66 people and the injury of many others, and carelessness that damaged property in violation of sections 290, 300 and 301 of the Criminal Code and the law governing entertainment venues.

Wisuk, alias "Sia Khao", and Boonchu were sentenced to three years in prison each, and Focus Light Sound System Co was fined 20,000 baht.

The two men and Focus Light Sound System Co were also ordered to pay a total of 87 million baht in compensation to the relatives of those who were killed and injured. The other defendants were acquitted.

The court later released Wisut and Boonchu on bail of 500,000 baht each pending appeals.

The verdict was read out to victims and their relatives who have been waiting for justice for nearly three years.

"I am really delighted with the verdict. Every time I have left the court with my head bowed down, but today I have a glimpse of hope," said Esther Laopikanon, who lost her only son, Mark, in the blaze.

"I would like to thank the court for the verdict that was based on the facts," she told the Bangkok Post.

Although she said she was satisfied with the ruling, no amount of punishment could replace the loss of so many lives at the Santika pub, many of whom were very young.

"I can't forget the pain of the loss. I know that everyone has to die one day, but not the way my son died, the way he was burnt," said Mrs Laopikanon.

She said she did not want to see a recurrence of such a tragedy. People in this kind of business should put safety first to protect their customers.

Malee Tanompanyarak, who lost her 30-year-old sister Vipawan in the inferno, said she too was satisfied with the verdict. "They [the defendants] deserve it because they failed to provide safety for their customers," Ms Malee said.

She added that any punishment and compensation provided to the victims' relatives would not be able to make her forget such a terrible loss.

"My sister died a few days after her birthday," Ms Malee said. "If my sister had been alive, she would have done many useful things for the family."

She said although the tragedy had passed in a flash, her family had not celebrated New Year again since the death of her sister.

Chairat Saeng-arun, a lawyer representing the Santika blaze victims, said his clients had also lodged a civil suit with the Phra Khanong Civil Court against the defendants.

Mr Chairat said the Criminal Court verdict would be used to bolster the civil case which would be ruled on in December this year.

Note: I live on Ekamai only about a kilometre from where the Santika once stood. That night, I saw the smoke and heard the sound of ambulances taking away the victims. The next day I walked over to the site and took this short video.

victim – someone who is killed injured or harmed in some way from an accident, natural disaster, crime, etc. เหยื่อผู้เคราะห์ร้าย
Criminal Court – a court which hears criminal cases, i.e., cases where people are accused of breaking a law and where punishment involves going to jail. ศาลอาญา
executive – a senior manager in a business or other organisation ผู้บริหาร
negligence – when you do not give enough care or attention to someone or something ความประมาท, ความไม่เอาใจใส่
fatal – causing someone to die ถึงตาย
blaze – a large fire that cause a lot of damage เพลิง
raze – to completely destroy a building, town, etc. so that nothing is left ทำลายจนราบ
sentence – (of a court of law) to give a punishment to someone who has been found guilty of committing a crime คำพิพากษา
nightspot – a place people go to for entertainment at night สถานบันเทิงกลางคืน
(jail) term – the length of time a person is required to spend in jail เวลาจำคุก
patron – a customer; someone who uses a particular entertainment place, hotel, restaurant, etc. ลูกค้า
injure – to hurt or cause physical harm to a person or animal ทำให้บาดเจ็บ, ทำร้าย
scores – large numbers of จำนวนมาก
escort – to go with someone คุ้ม
prosecutor – a lawyer whose job is to prove in court that someone accused of a crime is guilty อัยการ
charge – to accuse someone officially of committing a crime ตั้งข้อกล่าวหา
special effects – unusual or exciting pieces of action in films/movies or television programmes, that are created by computers or clever photography to show things that do not normally exist or happen
firework –objects that explode when you light them and produce coloured lights and loud noise – ดอกไม้ไฟ, ดอกไม้เพลิง, พลุ
spark – to make something happen, especially something bad ก่อให้เกิด
find guilty – to prove in a court of law that someone has committed a crime พิสูจน์ว่ามีความผิด
carelessness – not giving enough attention and thought to what you are doing, so that you make mistakes ความไม่ระมัดระวัง
property – things, especially valuable things, that are owned by someone ทรัพย์สมบัติ, ทรัพย์สิน
violation – an action that is against a law, agreement, principle, etc.  การฝ่าฝืนกฎหมาย
Criminal Code – the systems of laws dealing with crimes and their punishment ประมวลกฎหมายอาญา
venue – the place where an activity or event happens  สถานที่
alias – used when a person is known by two names; used before a different name that someone uses instead of their real name  ฉายา, สมญานาม
fine – to be required to pay an amount of money because you have broken the law ปรับเป็นเงิน
compensation – money that someone receives because something bad has happened to them การจ่ายเงินชดเชย
relative – a member of your family ญาติพี่น้อง
defendant – someone who has been accused of a crime and is on trial จำเลย
acquit – to state officially that someone is not guilty of the crime they were accused of ยกฟ้อง, ตัดสินให้พ้นโทษ
release – to allow someone to go free ปล่อยตัว
bail – money that is given to a court when someone is allowed to stay out of prison until their trial. If they do not return for the trial, the court keeps the money  เงินประกัน; การประกันตัว
pending – waiting to be dealt with, settled or completed ยังค้างอยู่, ซึ่งยังไม่จบสิ้น, อยู่ในระหว่าง
appeal – a request to a court to change a decision by a lower court อุทธรณ์
verdict – a decision by a court of law คำพิพากษา
delighted – very happy or satisfied about something ยินดีมาก,สุขใจ
glimpse – when you see something or someone for a very short time เหลือบดู, ชำเลือง, ชายตามอง
ruling – a decision by a court of law คำตัดสิน คำชี้ขาด
replace – to put a new person or thing in the place of someone or something แทน
recurrence – something that happens again การเกิดขึ้นอีก,การกลับมาอีก
tragedy – a very sad event that causes people to suffer or die โศกนาฏกรรม
inferno – a very large dangerous fire เพลิงไหม้ครั้งใหญ่
deserve – of something, good or bad, that you earn or are given because of your behavior or qualities สมควรได้รับ
pass in a flash – to happen very quickly วูบผ่านไปอย่างรวดเร็ว
client – a customer or someone who receives services of a lawyer ลูกความ
lodge – to formally make something such as a complaint or a claim  ยื่น (คำร้อง)
civil suit –a case filed a court that deals with non-criminal matters, especially a complaints made by people against other people or organisations  คดีที่ยื่นฟ้องต่อศาลแพ่ง
Civil Court – a court that deals with non-criminal matters, especially complaints made by people against other people or organisations  ศาลแพ่ง
bolster – to make something stronger or more effective ทำให้เข้มแข็ง
Do you like the content of this article?
COMMENT
MORE IN SECTION