Losing the battle against the river (updated)

Much of Nakorn Sawan municipality resembled a lake after the Chao Phraya River burst through an embankment yesterday. Maha Sarakham was hit today. One piece of good news: Former PM Abhisit met with current PM Yingluck A section, more than 100 metres long, of the floodwall made from concrete and sandbags at downtown Nakhon Sawan province finally collapsed due to the overwhelming currents of the Chao Phraya River yesterday. CHINNAWAT SINGHA

Evening update: We are united

Political divisions were put aside this afternoon when  former prime minister Abhisit Vejjajiva went to Don Mueang airport, where the government's flood relief command centre is based, to discuss anti-flood measures. 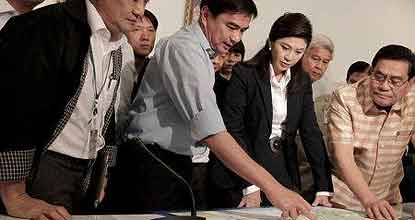 Before the meeting started, Mr Abhisit was welcomed by Prime Minister Yingluck.

The premier said the government was ready to listen to all sides to help combat the flood crisis.

"We welcome all suggestions because we're doing this for the country," Ms Yingluck said.

She told Mr Abhisit that the government was also working with the Bangkok Metropolitan Administration, which has a Democrat governor, to help address the flood problem.

The opposition leader replied that all sides must cooperate as the problem was not an issue for individual parties to deal with separately.

Following the conversation, Ms Yingluck took Mr Abhisit and his team to a meeting with the flood relief command centre, chaired by Justice Minister Pracha Promnok.

division – a disagreement between people, especially between people who belong to the same group การแตกร้าว, การแบ่งแยก
relief – help; assistance การช่วยให้พ้นภัย
measure – an action taken to solve a particular problem มาตรการ
combat – to try to stop something unpleasant or harmful from happening or increasing ต่อต้าน
crisis - a situation that has reached and extremely difficult or dangerous point ช่วงวิกฤต
Bangkok Metropolitan Administration (BMA) – the local government of Bangkok กรุงเทพมหานคร
address – to deal with a problem จัดการปัญหา
opposition – of a political party that is not part of the government พรรคฝ่ายค้าน
cooperate – to work with other people to achieve a result that is good for everyone involved ร่วมมือกัน

The Chi River has overflowed its banks in the northeastern province of Maha Sarakham and over 500 families have been evacuated.

The floods now cover Kosum Phisai district, affecting 116 villages and over 21,000 people.  About 140 square kilometers of farmland and 570 fish ponds have been damaged, and the problems are getting worse, reports said.

Meanwhile, army trucks are transporting about 150,000 sandbags no longer needed in Phitsanulok to Bangkok to build floodwalls to protect the capital.

Mr Charoen said the cancellation of the meetings would allow MPs and senators to return to their provinces to help  flood-hit people in their constituencies.

Some MPs have also been trapped by flooding in their home provinces and were not able to return to Bangkok, he said.

NAKHON SAWAN: Municipal authorities and soldiers were racing to salvage the province's economic centre after the Chao Phraya River burst through an embankment in the heart of the city yesterday morning.

Thousands of people, including patients, had to be evacuated to safe ground.

The powerful overflow from the Chao Phraya breached the dyke about 10.30am near the Bon Khai market and inundated the municipality area and the province's commercial centre. The area was flooded in waist-deep water as military trucks evacuated people to safety.

Bandit Sa-nguanphuak, Nakhon Sawan Muang district chief, said the municipality had built a dyke along the bank of the river in front of the Bon Khai market. The dyke is made up of sandbags and concrete walls 2 metres high.

He said when the dyke was breached an enormous volume of water quickly poured into Kosi Road, Matulee Road and Atthakawee Road in the province's commercial centre.

Provincial officials and soldiers from the 3rd Army were unsuccessful in their bid to fix the 100-metre-wide opening in the dyke caused by the raging torrent.

Wim Rungwattanajinda, secretary of the Secretariat of the Prime Minister and spokesman for the government's flood relief operations centre, said after the Chao Phraya had breached the dyke, a ferry carrying goods crashed into the dyke about 11am, widening the crack in the structure and letting in more water. An official from the 6th Regional Police Bureau air-drops a bag of relief supplies to residents in flood-hit Nakhon Sawanmunicipality. CHINNAWAT SINGHA.

Meanwhile, public health officials struggled to move 50 critically ill patients out of Sawan Pracharak Hospital which was caught off guard by the deluge yesterday morning .

Public Health Minister Witthaya Buranasiri said the hospital's ground floor was under 60cm of water and floodwater  was threatening to rise further to about 2m. There are 650 patients at the hospital; 50 of them are seriously ill and on respirators.

Thirty four of the seriously ill have been moved to Jiraprawat Camp Hospital and the rest are being transferred to other nearby hospitals. The other 600 patients will be sent to other hospitals shortly.

Nakhon Sawan, also known as Pak Nam Pho, is the province where four main rivers from the North — Ping, Wang, Yom, Nan — converge and become the Chao Phraya River, which flows through the Central Plains and Bangkok before  emptying into the Gulf of Thailand.

Prime Minister Yingluck Shinawatra and officials yesterday flew in to visit Nakhon Sawan after the Chao Phraya breached the embankment.

After being briefed on the flood situation, the prime minister instructed concerned agencies to mobilise resources and personnel to alleviate the flooding, repair the crack and save the rest of the province's commercial area.

Piyathida Pongkham, an official attached to the provincial disaster prevention and mitigation centre, said the deluge has hit 627 villages in 10 districts of Nakhon Sawan, with  nearly 210,000  people affected. Thirty five have died during the inundation and about 660,000 rai of farmland has been ravaged by floods.

section – any of the parts into which something is divided ส่วน, ส่วนที่ตัดออก, ส่วนย่อย
collapse – to fall down suddenly พังลงมา  ล้ม, พังครืน
overwhelming – to be so bad or so great that a person cannot deal with it; to cover somebody/something completely ท่วมท้น,รุนแรงมาก,
current – a strong movement of water in one direction กระแสน้ำ
fury – extreme anger, normally used for people, but also used for violent natural events ความโกรธจัด
erupt – to start suddenly ปะทุขึ้น
evacuate – to cause to leave a place because it is not safe เคลื่อนย้ายออกจาก
municipal – of a town, city or district with its own local government เทศบาล
authorities – people who have the power to make decisions or enforce the law เจ้าหน้าที่ผู้มีอำนาจ
salvage – to save something from being lost completely กอบกู้
burst – to break open suddenly because there is too much pressure inside or against โพล่ง, แตก, ระเบิด
embankment – a slope made of earth or stone that rises up from either side of a road, railway/railroad, river, etc. มูลดิน,ตลิ่งทาง
patient – someone who is receiving medical treatment คนป่วย, คนไข้
overflow – (of a river or body of water)  water flooding the land next to it การไหลล้น
breach – to break through or over something ข้าม, ทำให้แตก
dyke – a wall built to prevent the sea or a river from covering an area, or a channel dug to take water away from an area เขื่อนกั้นน้ำ
inundate – to flood; to submerge ท่วม, ทำให้จมลงใต้น้ำ
commercial – for business purposes เกี่ยวกับการค้า
waist – the middle part of the body that is narrower than the parts above and below   เอว
enormous – extremely large มหาศาล
volume – an amount of something ปริมาณ
bid – an attempt to do something ความพยายาม
raging – happening with a lot of force or violence รุนแรงมาก
torrent – a large amount of water flowing rapidly and violently กระแสน้ำเชี่ยว,การไหลพุ่
relief – help; assistance การช่วยให้พ้นภัย
operation – a planned activity involving a lot of people  การปฏิบัติการ
ferry – a boat for taking passengers and goods across an area of water, especially as a regular service เรือรับส่งข้ามฟาก
widen – to become wider; to make something wider  ทำให้กว้าง, ทำให้ขยายออก, ทำให้ขยายกว้าง
crack – a line on a surface where something is beginning to break apart รอยแตก  รอยร้าว
meanwhile – at the same time ในเวลาเดียวกัน
struggle – to try hard to do something that you find very difficult พยายาม
critically ill – very seriously ill or injured and might die อาการหนัก
caught off-guard – to be surprised by something unexpected ตกตะลึง, งงงันม เผลอ
deluge – a sudden flow of a large amount of water, a sudden, very heavy rainfall น้ำปริมาณมาก ฝนตกหนัก
respirator – a piece of equipment used to help someone breathe เครื่องช่วยหายใจ
transfer – to move someone or something from one place to another ย้าย
converge – to come from different directions to reach the same point ลู่เข้าหากัน,  เบนเข้าหากัน
brief – to give someone instructions or information แจ้งให้ทราบ, รายงาน, สรุป
situation – all the circumstances and things that are happening at a particular time and in a particular place  สถานการณ์
instruct – to tell somebody to do something, especially in a formal or official way สั่ง
concerned – involved in something, or affected by something เกี่ยวข้องกับ ที่สัมพันธ์กับ
mobilise – to bring together for a particular purpose ระดมพล
resources – things such as money, workers and equipment that can be used to help achieve something ทรัพยากร
personnel – the people who are employed in a company, organization or one of the armed forces บุคลากร, เจ้าหน้าที่, พนักงาน
alleviate – to make something less painful, severe, or serious ทำให้บรรเทา  ทำให้น้อยลง
repair – to fix something that is broken or damaged ซ่อมบำรุง
disaster – something very bad that happens and causes a lot of damage or kills a lot of people  ความหายนะ  ภัยพิบัติ
mitigation – a reduction in the harmful effects of something  การบรรเทา  การผ่อนคลาย
ravaged – destroyed damaged very badly  ถูกทำลาย, เสียหาย, ถูกล้างผลาญ