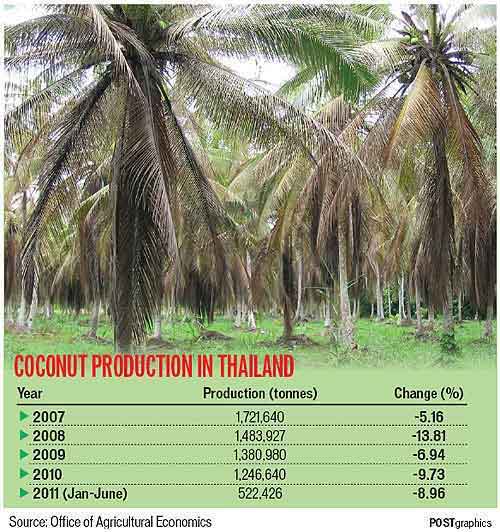 Mistaken as an unhealthy oil for several decades, coconut oil has fought its way back into the hearts of health-conscious consumers as a nutritious food.

No business is happier than Tropicanaoil Co, a producer of virgin coconut oil and the winner of this year's Prime Minister's Export Award under the OTOP Export Recognition category.

The company started its cold-pressed 100% coconut oil seven years ago by distributing through health-food shops. The market was small in the beginning but output has skyrocketed to 10,000 litres a month once consumers learned more about the properties of the product.

Tropicanaoil anticipates 60 million baht in sales this year from retailing its oil at 550 baht a litre along with several healthcare products using coconut oil as their main ingredient. The company targets 30% growth next year through expansion in both domestic and overseas markets.

Suradej Ninek, the company's managing director, recalled that the road to success was a bumpy one as it took consumers a while to learn about the benefits of virgin coconut oil.

The production process of many coconut oil crushers a decade ago was not well developed, casting doubt on quality. The first group to latch on to Tropicanaoil's product were health-conscious people over 45 who are educated and have purchasing power. Now a younger market is paying attention to coconut oil for beauty care.

Around 70% of sales are from the domestic market, where half consume it and the other half use it for beauty products.

He noted the quality of company's oil offers an advantage over other producers in Asia-Pacific and it will continue to focus on Russia, China and Japan where it has already established distribution networks. However, it will also expand more in Asean, particularly in Vietnam, in order to reap the benefits of the planned single market.
Tropicanaoil invested in getting its factory in Nakhon Pathom certified to meet Good Manufacturing Practice and HACCP standards. It also aims to achieve ISO 22000 guidelines next year. .

"Word of mouth helped us survive in the beginning," said the native of the Tapi River Basin in Surat Thani province where coconut has been grown for centuries.

Mr Suradej is convinced coconuts from his hometown are of better quality than other parts of the country due to the fertile soil and brackish water there, so the company is willing to pay to transport about 100,000 coconuts a month from more than 100 planters on 1,000 rai of plantation.

"Luckily transport costs are low as trucks that deliver goods to Southern provinces would return empty otherwise so we get a reduced rate," he said.

Tropicanaoil also sells coconut by-products, particularly shell that is used in the production of mosquito coils and powdered carbon.

The price of coconuts has risen from only a few baht each many years ago to a high of 27 baht earlier this year, as a pest outbreak greatly diminished output. Coconuts are now 16-19 baht each, but may reach 25 baht if some traders stock coconut to manipulate its price.

"A whole coconut can be kept for 45 days after harvest, providing plenty of time to bet on the price," said Mr Suradej.

After failing in the shoe industry, Mr Suradej believes R&D is the key to success in this field, leading his company to sign a 20-year memorandum of understanding to help fund students at the Faculty of Pharmacy of Silpakorn University to research how to add value to coconut oil, especially as an ingredient in beauty care and pharmaceuticals.

The company also works with Rajabhat Nakhon Pathom to hold packaging contests to find the most suitable container for its products.

coconut - actually not a "nut" at all, the name "coconut" was given by 16th century Portuguese and Spanish from the word "cocos" meaning "grinning face" from the three small holes on the coconut shell that resembles a human face: "a tree found across much of the tropics "the coconut is known for its great versatility as seen in the many domestic, commercial, and industrial uses of its different parts. Coconuts are part of the daily diet of many people. Its endosperm is known as the edible 'flesh' of the coconut; when dried it is called copra. The oil and milk derived from it are commonly used in cooking and frying; coconut oil is also widely used in soaps and cosmetics. The clear liquid coconut water within is a refreshing drink and can be processed to create alcohol. The husks and leaves can be used as material to make a variety of products for furnishing and decorating. It also has cultural and religious significance in many societies that use it" (See Wikipedia)

coconut oil -  "an edible oil extracted from the kernel or meat of matured coconut harvested from the coconut palm ... Throughout the tropical world, it has provided the primary source of fat in the diets of millions of people for generations. It has various applications in food, medicine, and industry" (See Wikipedia)

cold-pressed 100% coconut oil - "coconut oil can be extracted through "dry" or "wet" processing. Dry processing requires the meat to be extracted from the shell and dried using fire, sunlight, or kilns to create copra. The copra is pressed or dissolved with solvents, producing the coconut oil and a high-protein, high-fiber mash" (See Wikipedia)

resurgence - a new increase of activity or interest in a particular subject or idea which had been forgotten for some time การฟื้นคืน, การกลับสู่สภาพ

conscious - aware; noticing that something exists or is happening and realising that it is important ความสำนึก ความตระหนักถึง
health-conscious consumers - people who buy things to make them more healthy (food, vitamins, dietary supplements, skin products)

mistaken - incorrect belief; wrong belief
mistaken as unhealthy  - it is healthy, but people incorrectly believed it was unhealthy

Prime Minister's Export Award - an award by the Thai government given to showcase export products that meet high standards and quality, awards begin in 1992 (See website)
OTOP - Thailand's program to promote products made locally in villages

skyrocketed - increased suddenly by a very large amount ที่สูงขึ้นมาก
output has skyrocketed to 10,000 litres a month

the properties of the product.

retailing - the sale of goods from a fixed location, such as a department store or convenience store, in small amounts for direct consumption by the buyer (See Wikipedia)
retailing its oil at 550 baht a litre

expansion - when something increases in size, number or importance การขยายออก
domestic - within the country ภายในประเทศ
expansion in both domestic and overseas markets

the road to success was a bumpy one

crush -  the press or squeeze something very hard and break it up กด, ทำให้แตก,บด
coconut oil crushers - workers who break the coconut up so it can turned into oil

decade - a period of ten years ทศวรรษ, ระยะเวลา 10 ปี
a decade ago - 10 years before now, in the past

doubt - not know for sure if something is true or false, uncertain
casting doubt on quality

consume - 1. eat some food; 2. to use a supply of something for some purpose ใช้จนหมดไป
advantage - a condition giving a greater chance of success at whatever you are doing ความได้เปรียบ

focus - the main thing it is concerned with ให้ความสำคัญ

standards - 1. an acceptable level of quality or achievement มาตรฐาน; 2. a rule for behaving which should be obeyed บรรทัดฐาน, กฎเกณฑ์, กรอบ
HACCP standards - Hazard Analysis and Critical Control Points (pronounced: "hasup") is "a systematic preventive approach to food safety and pharmaceutical safety that addresses physical, chemical, and biological hazards as a means of prevention rather than finished product inspection. ... The system is used at all stages of food production and preparation processes including packaging, distribution, etc" (See Wikipedia)

convinced - certain; sure แน่ใจ, มั่นใจ
X is convinced that Y - X is sure and certain that Y is true, that Y is the case

planters - farmers who plant and grow crows เกษตรกรผู้ปลูกพืชไร่
plantation - a large farm where crops such as tea, coffee, cotton, sugar or, in this case, trees, are grown ไร่ นาขนาดใหญ่

empty - having nothing inside ว่างเปล่า
trucks would return empty - meaning: the trucks carried goods one way, but when they came back they would normally be empty (so filling the trucks could get a reduced price)

mosquito coil - mosquito-repelling chemicals shaped into a spiral. Burning usually begins at the outer end of the spiral and progresses slowly toward the centre of the spiral, producing a smoke that drives mosquitoes away (See Wikipedia)
powdered carbon - carbon in fine powder form

manipulate - to control something or someone to your advantage, often unfairly or dishonestly ชักใย
some traders stock coconut to manipulate its price.

R&D - research and development, when resaerchers at a university or other research center try to apply science to discover new products with new features or new cheaper and more efficient ways to produce products (See Wikipedia)

key - important คนสำคัญ
field - an area of study, highly trained work or research (example: Entry into the field of medicine is gained only after many years of rigorous study.)
the key to success in this field

packaging - the container or covering for a product while it is waiting to be sold in stores
suitable - right for a situation; acceptable or right for someone or something เหมาะสม