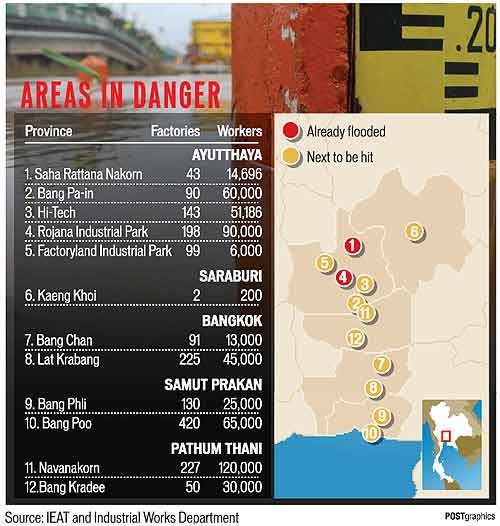 The infographic above shows the major industrial parks affected by the flooding. Japanese factories are located in many of these parks.

Photo below of tearful hug when floodwater finally broke through the dyke at Hi-Tech Industrial Estate in Ayutthaya yesterday, between Japanese businessman and Kittiratt Na-Ranong (Commerce Minister and Deputy Prime Minister) 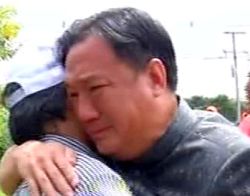 The suspension is due mainly to a shortage of raw materials. Employees have been deployed for flood-prevention efforts at the factories and the 24-year-old industrial estate itself.

Bangkadi is one of eight industrial estates warned on Wednesday by Industry Minister Wannarat Channukul that they are in danger of being flooded.

The others are Bang Chan and Lat Krabang industrial estates in Bangkok, Bang Phli and Bang Pu in Samut Prakan, Kaeng Khoi in Saraburi, Hi-Tech in Ayutthaya and Navanakorn in Pathum Thani.

"So far nothing has changed regarding Toshiba's investment in Thailand, but this situation must not happen again," said Kobkarn Wattanavrangkul, chairwoman of Toshiba Thailand.

The government has to understand that after the floodwaters recede, it must immediately implement flood prevention measures. It does not matter how much it costs, this must be done.

She said the widespread flooding has resulted in unprecedented manufacturing disruptions, and it will take factories a long time to recover.

"We'll have to reinvest in our factories and recoup lost business opportunities. Buyers could opt for products from elsewhere and never come back," said Ms Kobkarn, who is also the president of the Thai-Japanese Association.

She said one of Thailand's weaknesses is the dissemination of inaccurate and even contradictory information by different government agencies.

Yasuo Ashizawa, the president of Toshiba Semiconductor (Thailand), said his company was suffering a shortage of raw materials, as vendors at the Saha Rattananakorn and Hi-Tech industrial estates in Ayutthaya have been socked by the flooding.

One of the world's top three semiconductor makers, Toshiba produces a billion pieces a month at Bangkadi Industrial Park in Pathum Thani, where it employs 1,600 workers.

"The Japanese government has been very active in providing information on several occasions including the tsunami," said Mr Ashizawa.

In Thailand, flood information has proved inaccurate. We do not know what the situation is in other areas. The government should offer a forecast for the coming months too.

Canon Inc said yesterday that it would shift production of its two plants in Ayutthaya after they were inundated.

"Canon may shift inkjet printer production to another plant in Thailand or one in Vietnam," said a spokesman at the company's Tokyo headquarters.

Japan's Nidec Corporation suspended operations at six of its seven plants in Thailand. Three of the plants have sustained flood damage.

Nidec's hard-disk drive motor plant in Pathum Thani will be closed until Sunday. No time frame for reopening the other plants was given.

The Japan External Trade Organisation (Jetro) called on the Thai government to speed up crisis-control measures in order to minimise effects across the supply chain.

Setsuo Iuchi, the president of Jetro Thailand, said relevant information must be provided more quickly so investors in industrial estates can react to the situation in a timely manner.

"Japanese investors are still confident in Thailand and the government, but I could not say whether they will relocate to other countries," said Mr Iuchi.

foreign direct investment (FDI) - when companies invest in a foreign country to do business there with ownership of productive assets, such as factories, mines and land (See Wikipedia)

intact - not harmed, damaged, or lacking any parts as a results of something that has happened สมบูรณ์ ไม่บุบสลาย
foreign direct investment remains intact - foreign companies doing business in Thailand and running factories here have not decided to leave the country

unprecedented - never having happened before ที่ไม่เคยเกิดขึ้นมาก่อน
disruption - when some activity is stopped  (in the middle, not finished)

supply chain - all the steps in production and manufacturing of a good from raw materials to final product sold in stores; nowadays the different parts of a good such as a computer or a car may be made in many different countries (See Wikipedia)

minimise - to reduce something harmful or unpleasant to the smallest amount or degree ลดจำนวนลง ลดให้เหลือน้อยที่สุด
minimise effects across the supply chain.

urge - to advise someone very strongly about what action or attitude they should take วิงวอน ย้ำเตือน
improvement - when something gets better or when you make it better การปรับปรุง, การทำให้ดีขึ้น
urge improvement - say strongly that something should be improved

investment - taking your money and putting it into projects to make a profit or earn interest (buying stock shares, bonds, real estate)

suspension - stopping for a period of time (temporarily)

deployed - prepare a resource so that it is ready to be used
efforts - the work done towards achieving some goal; people trying to accomplish something, achieve a goal ความพยายาม
flood prevention efforts - actions to stop flood damage

employees have been deployed for flood-prevention efforts at the factories

recede - to move back; to move further away into the distance ถอยหลัง
floodwaters recede - floodwaters move back the river (dry land becomes dry again)

immediately - happening right after something else with no delay; right away ทันที
must immediately implement flood prevention measures

recover - when the situation improves, gets better; become healthy and fit again after an illness or injury การฟื้นไข้
will take factories a long time to recover

inaccurate - not completely correct or exact ซึ่งคลาดเคลื่อน,ซึ่งไม่ถูกต้อง
contradictory - when two things are said, that cannot both be true

shift - to transfer; to move from one place to another เคลื่อนย้าย
inundated - flooded ถูกน้ำท่วม, จมลงใต้น้ำ
plants - factories

would shift production of its two plants in Ayutthaya after they were inundated.

timely - doing quickly, on time, done in time to get benefits from doing it ถูกกาละเทศะ
manner - way วิธีการ
in a timely manner - doing something quickly and on time (before it is too late and damage has already happened)
react to the situation in a timely manner.

confident - being certain of your abilities or of having trust in people, plans, or the future มั่นใจ
still confident in Thailand and the government