For years no one listened to him teach about nature but now everyone listens, on Facebook and on TV. 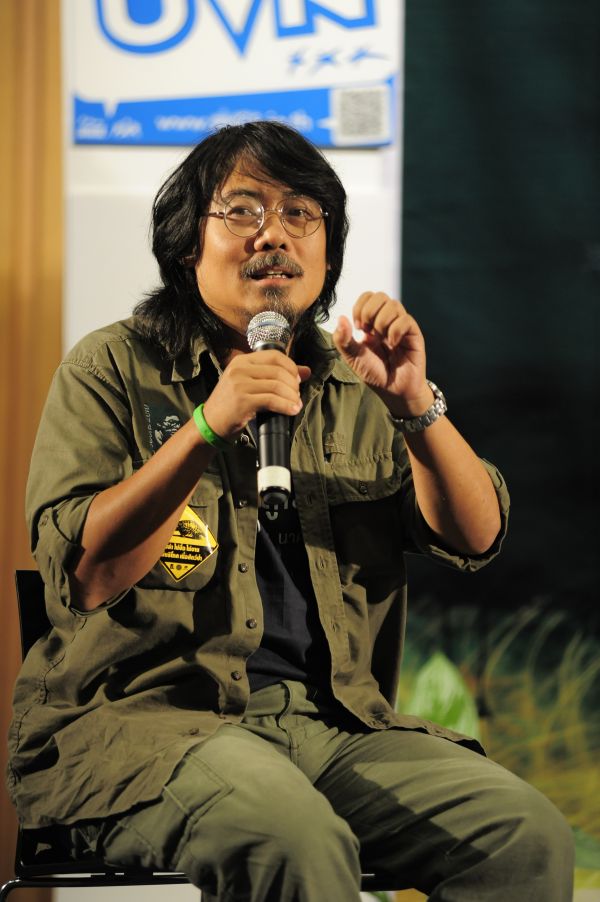 PROFILE: Telling it as it is, Sasin Chalermlarp's is best known for his accurate flood updates by Anchalee Kongrut

Not long ago, it wasn't uncommon for Sasin Chalermlarp, secretary-general of the Seub Nakasathien Foundation, to see people walk away or a turn a deaf ear when he raised the issue of environmental conservation.

But that has changed. The public is now paying serious attention to everything he says.

Sasin has become a celebrity of sorts after he produced his video clips early this month, well before floodwaters swamped Ayutthaya, and posted them on the social network sites like YouTube and Facebook.

Frustrated by the government's often-erroneous flood data and false alarms, people in Bangkok and its vicinity turned to non-conventional experts like Sasin for updates on the flood situation.

The other academic who gets equivalent public recognition is Assoc Prof Seri Suparatij, an energy expert at Rangsit University.

"The government has totally failed to communicate with the public," he said of the floods ravaging the country. "The public cannot understand what the government is talking about.

Sasin started producing his own video clips early this month after he found news reports and the government's flood updates inaccurate - and at times confusing.

I just want to make informative video clips that would help people understand the flood situation, without panicking them. People need this information, it is crucial, which the government has failed to provide.

He said the public cannot get balanced and accurate reports and that state data was too positive, designed more to keep the public calm rather than prepare them for the eventuality.

"Most of the information released by the government is sourced from the Department of Irrigation, where those in a position to make decisions do not know much about the flood situation, nor the geography of low-lying areas of Ayutthaya and Bangkok and their vicinities. That's why accurate analysis of the situation is not possible," said Sasin, a native of Ayutthaya whose home in Phra Nakhon Si Ayutthaya has been under water since early this month.

Many Facebook users gave him a thumbs-up for his flood updates. "Listen to this guy. He has more understanding of the situation than the government and Bangkok Governor MR Sukhumbhand Paribatra," read one comment.

Another reads. "Stop listening to the government and try out this video clip."

On his Facebook page, people have showered praises and thanked him for his daily updates.

"Your flood updates made me decide to fly back to Bangkok to take care my family and home in Klong Sam Wa district. Thank you!" wrote one user.

His clips on YouTube on October 11 were viewed 164,349 times, and his October 17 update 45,855 times, while his most recent update on October 19 was shared and tweeted vigorously among Bangkok residents anxious to learn about the latest situation.

Sasin and Assoc Prof Seri are now familiar faces on local television, giving flood updates. Sasin's has 4,999 friends on Facebook, most looking for his flood updates.

It is not the first time that Sasin has produced video clips and posted them on YouTube. As secretary-general of the Seub Nakhasathien Foundation, he has been active at social networking, uploading clips of the foundation's forest conservation work on YouTube. But unlike his flood updates, those clips had received a lukewarm response.

One clip was viewed only 692 times, and another - on the situation in Thungyai Naresuan Wildlife Sanctuary, a World Heritage site and prime conservation area in the Western Forest Complex - was viewed only three times.

The 43-year-old conservationist is self-taught in flood water management. Since the onset of flooding, he has been glued to the Department of Irrigation's website, which offers a real-time read of the water level in inundated areas.

He constantly checks and verifies information with friends, experts and staff at the department.

Although Sasin has often cited deforestation as a major cause of floods, he said the crisis was part of a natural flood cycle that occurs in every few decades.

But people forget the geography of Ayutthaya and Bangkok. They just moved in and built houses and industrial estates and paid no heed to nature.

Ayutthaya, Bangkok and their vicinities indeed constitute one of the largest flood plains in the world. Fed by three rivers, the area is a rice bowl thanks to rich silt from upstream and seasonal flooding spawned by a network of tributaries. In short the area, naturally, is supposed to get flooded, not stay dry.

"If we do not understand the geography, we will keep inviting people to flood-prone Ayutthaya. The government and those involved in development do not understand geography and nature of this area and underestimate the natural cycle," he said.

While refusing to point the finger at any particular agencies, Sasin however, noted that the Department of Irrigation owed the public an explanation why it kept water in dams upstream for too long.

This crisis, he said, reflects the chronic problem in the way state agencies handle water management. Apart from technical shortcomings, it is a crisis of faith.

When the flood crisis is over, he will return to his "home" - a cabin in Thung Yai Naresuan sanctuary where the foundation has worked hand in hand with local communities fighting poaching and deforestation.

But before that happens, it is likely that we will be seeing his face on television or on the social network pages for a while as floodwaters continue posing an increasing threat to Bangkok's inner areas. Another crisis in the making

Is there any word of wisdom from the digital Noah. When he will suggest us to build a boat?

"Do not panic," said stoic Sasin, urging people to maintain a sense of normalcy.

Naturally, floods will come and we will get wet and then the water will recede. Then, we - Bangkok and Ayutthaya residents - will restore the country together. Floods will bring alluvial silt that will enrich soil and replenish underground water. There is always a good and a bad side to every story.

(Source: Bangkok Post, PROFILE, Telling it as it is, Sasin Chalermlarp's is best known for his accurate flood updates, 21/10/2011, Anchalee Kongrut, link)

conservationist - a person who helps protect animals and plants living wild in the forest
green warrior - an environmental activist; working to save the environment and teach and inform people about it

self-taught - teaching yourself a subject (not learning it from a teacher in school, as usual)
self-taught in flood water management

issue - a problem that needs to be considered; a subject that people discuss or argue about ประเด็น
raised the issue of environmental conservation.

update - add the most recent information
accurate - correct, exact and without any mistakes ถูกต้อง, แม่นยำ accurate flood updates
updates on the flood situation

received a lukewarm response.
turn a deaf ear - not listen to someone

released - made available to the public
information released by the government
sourced from ... - the information comes from ...

positive - hopeful and confident, or giving cause for hope and confidence ซึ่งมองในแง่ดี
eventuality - something that might happen, especially something bad that people might have to deal with เหตุร้ายที่อาจเกิดขึ้น
state - government รัฐ
state data was too positive, designed more to keep the public calm rather than prepare them for the eventuality

Ayutthaya, Bangkok and their vicinities indeed constitute one of the largest flood plains in the world.

academic - someone who teaches at a college, or who studies as part of their job นักวิชาการ

gave him a thumbs-up - thought what he did was great, had very goo opinion of him and his work

comment - remark, telling what you think or what your opinion is about an issue; express an opinion แสดงความคิดเห็น หมายเหตุ

residents - people who live in a particular place or area ผู้อยู่อาศัย ชาวบ้านในบริเวณ ผู้อาศัยในบริเวณ
Bangkok residents anxious to learn about the latest situation.
local - in or related to the area that you live, or to the particular area that you are talking about ท้องถิ่น
familiar faces on local television

onset - the beginning of something, especially something unpleasant การเริ่มต้น กำเริบ
the onset of flooding

real time - getting information about an event when it is actually happening
offers a real-time read of the water level in inundated areas.

constantly - continuously; all the time อย่างต่อเนื่อง
staff - workers, employees พนักงาน
constantly checks and verifies information with friends, experts and staff at the department.

cited - mentioned as an example, explanation or proof of something else กล่าวถึง
deforestation - cutting down lots of trees in the forest
cited deforestation as a major cause of floods

crisis - an urgent, difficult or dangerous situation วิกฤตการณ์ วิกฤต
natural - found in nature (not made in a factory by humans) ตามธรรมชาติ
cycle - a series of events repeated over and over again (in the same order)
natural flood cycle - the floods that an area has quite naturally from time to time

nature - all the animals, forest, mountains, here before people were here ธรรมชาติ

silt - thin layer of dirt at the bottom of a river
rich silt from upstream and seasonal flooding spawned by a network of tributaries.

refusing to point the finger at any particular agencies

owed the public an explanation

cabin - a small house made of wood in the forest

sanctuary - a place where birds or animals can live and be protected, especially from hunters or dangerous conditions
foundation - an organisation that provides money for things such as medical research or for a charity มูลนิธิ

poaching - illegal killing of wildlife (to eat or for their hides of tusks, for example)

stoic - accepting bad things when they happen and not getting upset or emotional about it, an ancient Greek philosophy (See Wikipedia)

maintain - to keep รักษา
normalcy - the state of being normal, ordinary or usual สภาวะปกติ
maintain a sense of normalcy.

restore - to cause a particular situation to exist again, especially a good one ฟื้นฟูสภาพ
restore the country together - bring the country back to a normal condition again , by working together