With 25% of global hard drive production in Thailand, a global shortage & 20% price hikes for many months projected. 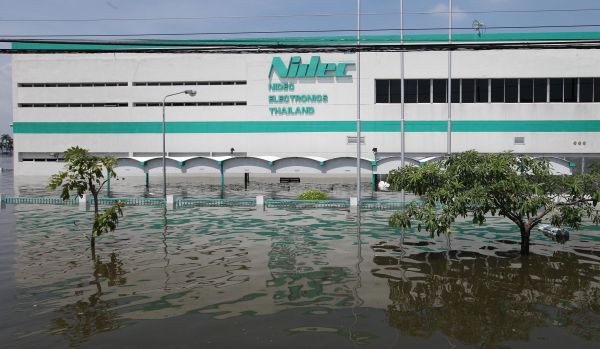 Photo above of the Ayutthaya hard drive motor plant of Japan's Nidec Corporation. Production has been relocated to a factory in Pathumthani.

A shortage of hard-disk drives (HDD) has resulted in their prices spiking 20%, with computer prices expected to rise by 500 to 1,000 baht next month as a result.

Thailand's worst flooding in seven decades may lead to a global shortage of drives through the first quarter of next year, as Thailand is the world's second-largest exporter of HDDs behind China, with 25% of worldwide HDD assembly facilities located locally.

Panuwat Khantamoleekul, managing director of Supreme Distribution (Thailand), a local computer vendor under the DTK brand, said prices of entry-level HDDs with a capacity of 500 to 1,000 gigabytes had increased between 300 and 400 baht or 20% as a result of flooding.

Typically, computer makers and dealers have one to two months of HDDs in stock to avoid dynamic pricing and outdated technology risk.

Vira Intanate, chief executive officer of SVOA Plc, a local computer maker and distributor, said HDD prices rose by 25% in the market in the past two weeks and there was a shortage.

The ongoing merger and acquisition deal between Seagate and Toshiba along with Western Digital Corp (WDC) and Hitachi Global Storage Technologies has also slowed HDD production the past few months.

"We are looking to outsource [HDDs] from other countries, particularly China, Hong Kong and Singapore," Mr Vira said.

Mr Panuwat added that prices of RAM (random-access memory), another computer component, also rose by 3-5%, and computer prices are expected to increase by 500 to 1,000 baht next month.

Fang Zhang, an analyst for storage at iSuppli, a global memory and storage market research firm, said WDC and Toshiba had temporarily halted production of HDDs in Thailand.

WDC, the world's largest HDD manufacturer by volume, has 37,000 workers in Thailand and production here accounts for 60% of the company's total capacity. In the second quarter WDC made 53.8 million drives, giving it a 32% share of the global market.

Toshiba employs 3,900 workers and approximately 50% of its manufacturing capacity is in Thailand. In the second quarter, Toshiba was the fourth-ranked HDD supplier, with 17.8 million units and a 10.6% share.

The HDD suspension assembly maker Hutchinson Technology also temporarily stopped operations in Ayutthaya due to flooding and a loss of power. It plans to increase output at its US plant and will use existing inventory to meet customer demand.

Japan's Nidec Corp restarted its motor factory No. 1 in Bangkadi Industrial Park in Pathum Thani on Tuesday, after production was halted due to floods. Its factories in Pathum Thani and Ayutthaya supply more than 70% of all global HDD motors.

Nidec's shares have been flirting with seven-month lows on concerns about the impact of the Thai floods on its supply chain. Nidec added it would start making HDD motors in the Philippines and China to offset lost output.

global - throughout the world; all over the world, including the whole world ทั่วโลก ทั้งโลก
global shortage of drives through the first quarter of next year

random - happening, done or chosen by chance rather than according to a plan ซึ่งไม่มีแบบแผน
access -entering a place ทางเข้า

memory - something that you remember from the past; the ability to remember information, experiences and people ความจำ
computer memory - (in a computer a "memory chip" remembers data for a period of time to help the computer do its job)

storage - the putting and keeping of things in a special place for use in the future การเก็บ
computer storage - components or parts inside the computer (memory, hard drive) that are used to keep and store data
hierarchy of storage - levels of data storage in a computer ranging from computer memory with low capacity but fast access time to hard drives with high capacity and slower access time (See Wikipedia)

capacity - storage capacity, the amount of data that can be stored on a storage device such as a hard drive
entry-level HDDs with a capacity of 500 to 1,000 gigabytes

local - in this country (here: Thailand)
vendor - seller of goods, either: 1. a large company; or 2. a small shop พ่อค้า, แม่ค้า
brand - a type of product made by a particular company ตรา, ยี่ห้อ
local computer vendor under the DTK brand

outdated - old and not currently being used, old-fashioned
risk - danger, how likely or possible it is for a bad event that causes harm and damage ความเสี่ยง

outdated technology risk - if a store keeps products in inventory too long, then they will have old overpriced products that no one wants to buy

ongoing - currently happening; happening at the present moment; continuing  (has not finished yet) ไม่หยุดยั้ง, ต่อเนื่อง อย่างต่อเนื่อง
merger - joining together, when two companies become one company การรวมบริษัท การรวมเข้าด้วยกัน
acquisition - when one company buys another company
ongoing merger and acquisition deal

temporarily - only for a limited time; not permanent ชั่วคราว
halted - stopped
temporarily halted production of HDDs - factories stopped making hard drives for a period of time

power - energy in the form of electricity produced in large quantities and used to operate lights, machines, and heating
loss of power - no electricity (a brown out)

inventory - the products kept in a shop, warehouse, etc., in this case, unsold cars สินค้าที่จัดเก็บในสต๊อก
demand - the need and desire to buy goods and services by households and businesses
will use existing inventory to meet customer demand.

supply chain - the many steps in producing a final product for sale in stores; starting with raw materials, different parts are produced in different factories and then assembled into a final product (See Wikipedia)
impact - an effect or influence ผลกระทบ
impact of the Thai floods on its supply chain