Can it flood in the subway? | Bangkok Post: learning

Nightmarish to even daydream about, subways are protected by 2.7 meters of barriers, but most people are staying home anyway. 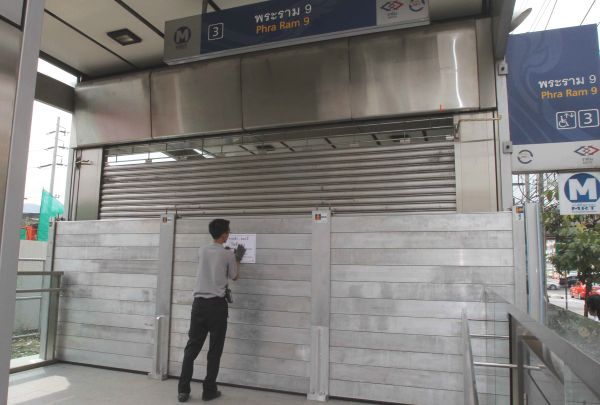 Photo of flood protection walls being finished at Rama IX station in preparation for floods in central Bangkok.

The number of commuters using Bangkok's subway and elevated trains has fallen considerably, while the operators have deployed safeguard measures to ensure smooth operation of the system amid threats of flooding in the capital.

Many analysts had accepted the mass-transit operators to gain as city residents left their cars at home, but many people are simply going nowhere at all and this has reduced ridership.

SET-listed Bangkok Metro Plc (BMCL) said average daily ridership has dropped by about 20% this week to 200,000 on weekdays as Bangkok residents take holidays to look after their properties, with some leaving the capital.

Each subway station is 1.20 metres above street level and functions as a "permanent bunker". BMCL has built flood protection walls adding another 1.50 metres.

If floodwaters reach the second stair of the station, that station will shut down service, he added.

Anat Arbhabhirama, an adviser to the board of BTS Group Holdings Plc, said Skytrain ridership had dipped this week to around 500,000 per weekday. But numbers topped 600,000 on some workdays last week as motorists stopped using their cars.

"At present, if they don't have a serious need, Bangkok residents will stay home, while some have already fled town," Dr Anat said.

Some companies have temporarily shut down, also reducing commuters.

"If the flood does not reach 2.25 metres above sea level, our control room and all the systems will not be disrupted," he added.

mass - large numbers จำนวนมหาศาล
mass-transit - forms of transport such as subway, bus or elevated train that can move large numbers of people around a city or region, also called "public transport" (See Wikipedia)
mass-transit operators - companies that own and operate mass-transit systems such as the subway or the elevated train
transport - any vehicle such as a car, truck, airplane, boat that can bring people and things from one place to another place (See Wikipedia)

transit - the act of moving from one place to another การเดินทางผ่าน (here means: mass transit)
ridership - the people who ride the trains (usually measured per day)
nosedive - fall or drop suddenly and quickly (the "nose" of an airplane is heading straight at the ground)
transit ridership nosedives - the number of people riding mass transit (subway, skytrain) fell by a very large amount suddenly

nightmare (noun) - a frightening dream nightmarish (adjective) - very frightening daydream -  a fantasy; full of happy pleasant things, hopes, ambitions, what you would like in the future; dreaming while awake, in the middle of the day, when you should be working perhaps (See Wikipedia)

flee - to escape; leave a place or person quickly because you are afraid of possible danger หนี อพยพ (in the present)
residents - people who live in an area ผู้อาศัย ผู้อยู่อาศัย ชาวบ้านในบริเวณ ผู้อาศัยในบริเวณ
residents flee the city

operators - a company doing some business (here: subway operators)
deployed - prepare a resource so that it is ready to be used
safeguard - protect ป้องกัน
measures - actions taken to deal with a problem มาตราการ
operators have deployed safeguard measures

ensure smooth operation of the system amid threats of flooding in the capital.

many people are simply going nowhere at all and this has reduced ridership.

functions as a "permanent bunker"

shut down service - stop the service (for a period of time)

dipped - fell, decreased, went down
Skytrain ridership dipped this week to around 500,000 per weekday

topped - went above
numbers topped 600,000 on some workdays

temporarily - only for a limited time; not permanent ชั่วคราว
temporarily shut down

trade - the buying and selling of goods or assets such as stock shares การค้าขาย
shares closed yesterday at 0.51 baht in trade worth 610,000 baht