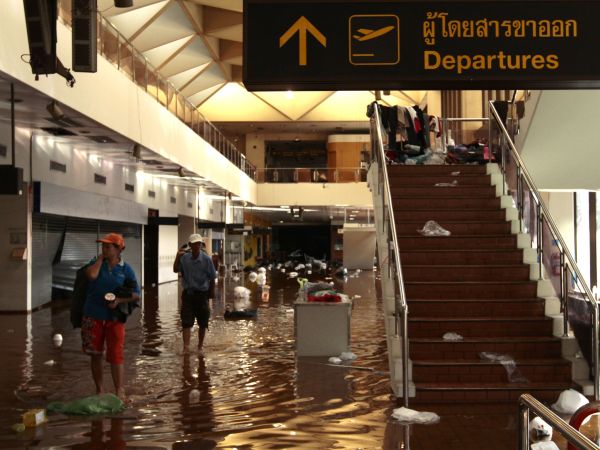 Photo of flood-damaged Don Mueang Airport, like many places usually teeming with people, now an eerie ghost town with its ground floor flooded.

Flood losses for local non-life insurers are expected to be manageable and should not lead to widespread financial strain, says Fitch Ratings.

The ratings agency noted that flood damage was now expected to reach up to US$4 billion, but it would take time for catastrophe-modelling firms and loss adjusters to estimate insured losses.

"Many lines of insurance will be affected, including industrial all risk, property, motor, business interruption and, to a lesser extent, life insurance," it said.

Many factories in the affected areas, especially car manufacturers, have ceased production, and the ultimate insured loss will be partly predicated on the speed with which businesses resume operations.

Fitch noted that insured losses from floods were expected to be "markedly lower" than economic losses, as Thailand's insurance coverage is low compared with more established markets.

A Swiss Re study shows local insurance penetration, measured by premiums as a percentage of gross domestic product, was 4.3% last year, compared with 8% in the US and 12.4% in the UK.

The Office of the Insurance Commission (OIC) estimates total losses at 140 billion baht to date including damage at seven industrial estates, although assessments are continuing.

Of these losses, 80% are covered by Japanese insurers with the total sum insured of 456 billion baht, said the OIC.

"While the damage could be on a much larger scale once the full assessment has been completed, Fitch believes Japanese insurers are unlikely to be significantly affected, given that 85% of the coverage is being ceded to foreign reinsurers," it said.

teeming with people - crowded with people moving around
eerie - scary, strange and frightening (making you feel nervous)
ghost town - an abandoned town; a town without people, that once had people living it in the past (See Wikipedia)

insurance - a system of protection against loss, a person pays money every month (premiums) for a guarantee that the company will pay them money if they or their property is damaged or lost (See Wikipedia) การประกันภัย

insurance coverage - insurance protection, when a person or a company has insurance that will pay them money to help them if some bad event happens
established - has existed for a long time ก่อตั้่ง be in a successful position over a long period of time มีตำแหน่งที่มั่นคง

property insurance - insurance that covers the damage or loss of land and buildings or a home built on the land (real estate) (See Wikipedia)
motor insurance - "insurance purchased for cars, trucks, motorcycles, and other road vehicles. Its primary use is to provide financial protection against physical damage and/or bodily injury resulting from traffic collisions" (See Wikipedia)

insurer - an "insurance company" in the business of selling "insurance policies"
local - in this country (here: Thailand)
local non-life insurers

loss adjuster - employees of an insurance company who determine how much the company must pay when there is a bad event, "investigate insurance claims by interviewing the claimant and witnesses, consulting police and hospital records, and inspecting property damage to determine the extent of the company’s liability", also called a "claims adjustor" or "insurance adjustor" (See Wikipedia)

estimate - to say what you think an amount or value is or will be, either by using available information or by guessing คาดคะเน โดยประมาณ
estimate insured losses

expected - believe will happen คาดว่า (จะเกิดขึ้น)
manageable - will be able to "manage" the problem (handle the problem, solve the problem, deal with the problem); not too difficult, but not easy either
losses expected to be manageable - they believe that the losses will

reinsurers - companies that buy insurance policies from other countries as part of risk management, this practice is called "reinsurance", "the main reason for insurers to buy reinsurance is to transfer risk from the insurer to the reinsurer" (See Wikipedia)

believes Japanese insurers are unlikely to be significantly affected, given that 85% of the coverage is being ceded to foreign reinsurers

risk - danger, how likely or possible it is for a bad event to happen that causes harm and damage ความเสี่ยง
property - land and buildings on the land

widespread - happening or existing in many places, or affecting many people อย่างแพร่หลาย
strain - when something is forced to do more than it is able to do which may cause it to break
financial - connected with money and finance
finance - the activity and process of raising and getting money for businesses (projects, ventures)

expected to reach up to US$4 billion

extent - size ขนาด
to a lesser extent - less true for it

ultimate - the final result after a long series of events
ultimate insured loss - the insured loss (calculated in the end, after all damage has been done)

ultimate insured loss will be partly predicated on the speed with which businesses resume operations.

estimates - guesses of what the size, value, amount, cost, etc. of something might be การประมาณค่า
estimates total losses at 140 billion baht to date

sum - an amount of something, especially money จำนวนเงิน
sum insured - the amount (of losses) insured
of these losses, 80% are covered by Japanese insurers with the total sum insured of 456 billion baht