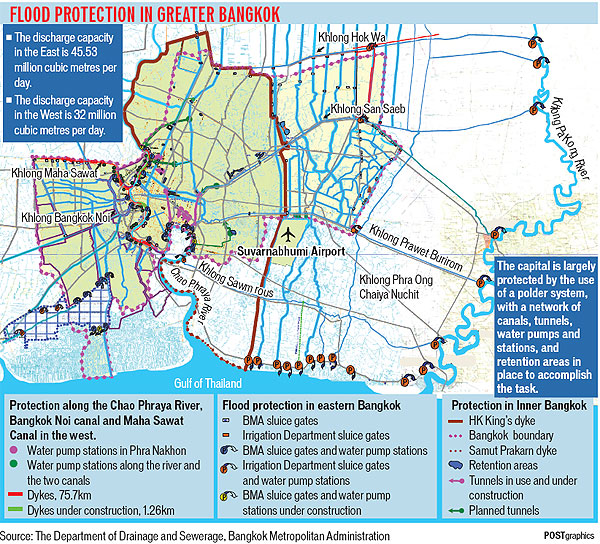 Above, a map of Bangkok from the Department of Drainage and Sewerage showing Bangkok's water drainage system.

Drainage system not up to task, CANALS BUILT TO TAKE LOCALISED FLOODS by Piyaporn Wongruang

Bangkok has been struggling to divert floodwater out of the city because its water drainage system was developed mainly for handling localised flooding caused by heavy rainfall, not massive run-offs from the North, said former senior officials of the Bangkok Metropolitan Administration (BMA).

Polder systems have been developed mainly in inner Bangkok, the western side of the city, and the eastern side.

In inner Bangkok, a large polder has major roads and railways cutting through the Ramkhamhaeng and Phetchaburi areas, acting as its main dykes.

The polder is divided into more than 10 sub-polders where drainage canals and tunnels, pump stations and pumps help drain water out from the protected areas inside them.

The western side has a network of dykes along the Chao Phraya, and Mahasawas and Bangkok Noi canals preventing flooding from flowing into the protected areas inside the dykes.

In addition, a major water retention pond in the South can hold up to six million cubic metres of water.

On the eastern side, His Majesty the King's dyke, which runs north to south, and around 20 retention ponds help retain up to six million cubic metres of water before it is pumped out and drained to the sea. Seven giant tunnels have also been installed to help speed drainage.

Phichit Rattakul, former Bangkok governor, said the water drainage system was developed to fight flooding caused by rainfall and run-off from the North which generally head to the eastern side.

The main protection measures against run-off are HM King's dyke and Pasak Cholsid dam in Saraburi further northeast of Bangkok, which can help hold up to 800 million cubic metres of water.

The rest of the run-off usually goes to the Chao Phraya and Thachin rivers. But another mass of water is travelling to Bangkok from the North, and the city has hardly any infrastructure to cope.

Massive run-off above Bangkok needs floodways to travel through the city, but man-made objects block its path.

Suvannabhumi airport, for instance, is built below several major canals in the east, blocking water from flowing further down to the sea.

Mr Phichit said the city must develop more floodways from which run-off from the North can travel down to the sea.

Mr Phichit has proposed the idea of a second ''Chao Phraya''.

''We need more ways to allow water to travel past the city,'' he said.

Mr Phichit said infrastructure should be developed to deal with heavy floods.

Chanchai Vitoonpanyakij, former deputy director of the Drainage and Sewerage Department, agreed Bangkok needs new infrastructure to cope with flooding from the North, especially more floodways to allow water to pass to the sea.

Some canals running through Bangkok come under the responsibility of the Irrigation Department, and Bangkok officials must ask for its help in diverting water away from the city.

A source at the government's Flood Relief Operations Command (Froc), which is handling the present flooding, said BMA officials started to join the team at Froc only in the second week.

The centre opened as flooding spread in Ayutthaya early this month.

Officials bickered as they had differing viewpoints on how to manage water. The Irrigation Department initially paid attention mainly to floodwaters in the rivers and tried to manage them, even as fields were left inundated.

''They are getting along now, but it's a bit too late,'' said the source.

drainage (noun) - the system of water or waste liquids flowing away from somewhere into the ground or down pipes การระบายน้ำ (See Wikipedia)
drain (verb) - if you drain something, you remove the liquid from it, usually by pouring it away or allowing it to flow away รีดน้ำออก

drainage system not up to task
task - a piece of work that someone does; something that you have to do หน้าที่; ภารกิจ
up to the task - have the skills and energy needed to complete the task successfully
not up to the task - not have those energy or skills needed

polder system - "a low-lying tract of land enclosed by embankments (barriers) known as dikes, that forms an artificial hydrological entity, meaning it has no connection with outside water other than through manually-operated devices. There are three types of polder: 1. Land reclaimed from a body of water, such as a lake or the sea bed,  2. Flood plains separated from the sea or river by a dike, 3. Marshes separated from the surrounding water by a dike and consequently drained" (See Wikipedia)

dyke - a wall built to prevent the sea or a river from covering an area, or a channel dug to take water away from an area เขื่อนกั้นน้ำ
network - a large system of connected parts, organisations, people, etc. เครือข่าย
network of dykes

run-off - same as "surface run-off"
surface run-off -  "the water flow that occurs when soil is infiltrated to full capacity and excess water from rain, meltwater, or other sources flows over the land. This is a major component of the water cycle" (See Wikipedia)
water cycle - the continuous movement of water on, above and below the surface of the Earth, from rain to rivers to the ocean, evaporation to clouds and then rain again, also called the "hydrologic cycle" (See Wikipedia)

disaster - something very bad that happens and causes a lot of damage ความหายนะ ภัยพิบัติ (See Wikipedia)
risk - danger, how likely or possible it is for a bad event that causes harm and damage ความเสี่ยง

disaster warnings - when the government warns people to leave a place (or tells them to do something for their safety) (See Wikipedia)
come up with disaster risk assessments, hazard maps, and better disaster warnings.

sewerage - "the infrastructure that conveys sewage. It encompasses receiving drains, manholes, pumping stations, storm overflows, screening chambers, etc. of the sanitary sewer. Sewerage ends at the entry to a sewage treatment plant or at the point of discharge into the environment" (See Wikipedia also see storm drains)

struggling - trying to do something but having serious difficulties มีความยุ่งยาก
divert - make travel in a different direction, along a different route เปลี่ยนเส้นทาง
struggling to divert floodwater out of the city

canal - a water road, a long stretch of water for boats to travel on or to send water to a place where it is needed for growing crops, for example (See Wikipedia)
canals built to take localised floods

retain (verb) - keep, continue to have, not let go of something, not let it leave รักษา
retain water - keep and store water at a place (not let it leave and flow away)
retain up to six million cubic metres of water

tunnels - a road or path under the ground, holes dug underground
seven giant tunnels have also been installed to help speed drainage

pump - to force water to flow in a certain direction to a certain plave (example: floodwaters were pumped out of the flooded street back to the river)
pump stations - special places with highpower pumps to remove water from a place
designated - chosen for a special purpose; chosen for something ที่ได้รับการแต่งตั้ง แต่งตั้ง  marked, separated, or give a name for a particular purpose ถูกกำหนด
canals and tunnels have been dug, retention ponds designated, and pump stations constructed to help drain the water.
floodwaters are directed to the sea by pumps, water drainage canals and tunnels

mass - large numbers จำนวนมหาศาล
mass of water - a large amount of water
cope - deal with a problem, continue to operate and function despite problems (make it manageable)   รับมือกับ (See glossary)

another mass of water is travelling to Bangkok from the North, and the city has hardly any infrastructure to cope

block - to stop something from moving through or along something else กีดขวาง ปิดกั้น
Massive run-off above Bangkok needs floodways to travel through the city, but man-made objects block its path

scrapped - cancelled, ended, discarded; decided not to continue with something, such as a plan or event ยุติแผนที่วางไว้
lack - does not have ขาดแคลน
support - help, by giving money, for example สนับสนุน
lack of support - not getting any help

spread - to gradually affect or cover a larger area แพร่หลาย, แพร่กระจาย แพร่กระจายไปทั่ว
the centre opened as flooding spread in Ayutthaya

bicker - fight, quarrel, argue
officials bickered as they had differing viewpoints on how to manage water

pay attention to - the things you are looking at and focusing on and thinking about
initially - at first;  at the beginning ในเบื้องต้น ในระยะต้น
inundated - flooded ถูกน้ำท่วม, จมลงใต้น้ำ

The Irrigation Department initially paid attention mainly to floodwaters in the rivers and tried to manage them, even as fields were left inundated.

they are getting along now, but it's a bit too late