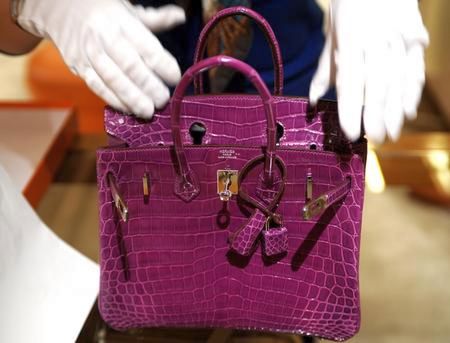 Photo above of a Hermes crocodile skin bag (AFP photo by Sam Yeh).

Photo below of crocodylus porosus indigenous to Thailand and Australia. 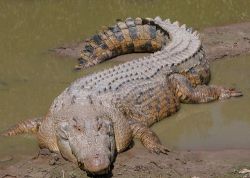 It's not surprising that Thailand would need a crocodile hotline during the floods, but the people calling it might not just be homeowners worried about being eaten by an escaped croc.

Thailand has the largest crocodile farming industry in the world and famous international fashion brands source their exotic skins from the kingdom.

Around 700,000 crocodiles are raised in 22 farms registered with the Fisheries Department and another 929 small farms nationwide.

Thailand exports crocodile hides and boned and boneless alligator meat as well as processed foods including crocodile sausage and ground meat, according to Nuntawan Sakuntanaga, the director-general of the Export Promotion Department.
Crocodile blood is also in demand in many Asian markets for its perceived medicinal properties.

Ms Nuntawan said crocodile hides are a commodity in high demand in the global market as their durability makes them ideal for producing fashion products from bags to shoes, belts and other accessories.

The department sees a bright opportunity for exports of Thai crocodile products as the skin is used mostly for women's fashion bags in Europe, while the United States uses the hides for men's wallets and cowboy boots.

Crocodile bags can cost as much as US$20,000 to $40,000 each. That fact alone encouraged the luxury goods giant LVMH Moet Hennessy to invest in Singapore's Heng Long International Ltd - one of the world's top five suppliers of crocodile hides.

One reason for the high price is that it takes around four crocodiles to make one bag as only specific cuts of skin can be used.

The most sought after part of a crocodile skin is the abdomen and hides of crocodylus porosus, which is indigenous to Southeast Asia and Australia.

Crocodile Fashion Products Vocabulary
crocodile -  (See Wikipedia)
croc - the short easy way of saying "crocodile"
alligator - one kind of crocodile found only in the US and China, but sometimes the word is used loosely to mean "crocodile" (See Wikipedia)

crocodylus porosus - the largest reptile, is indigenous to Southeast Asia and Australia, also known as the Saltwater Crocodile (See Wikipedia)

Hermes crocodile skin bag - the most famous bag made by Hermès is the Birkin bag, a handmade purse named after actress Jane Birkin: The bag is a symbol of wealth due to its high price and elusiveness to the public. Its prices range from $9,000 to $150,000. Costs escalate according to the type of materials. The bags are distributed to Hermès boutiques on unpredictable schedules and in limited quantities, creating scarcity and, intended or unintended, exclusivity...based on an 1892 design... Birkin bags are sold in a range of sizes. Each one may be made to order with different customer-chosen hides, color, and hardware fixtures. There are other individual options, such as diamond-encrusting. The bag also has a variety of hides such as calf leather, ostrich, crocodile, and lizard. One of the most expensive is saltwater crocodile skin. Bags with smaller scales cost more than those with larger scales. The bag is lined with goat-skin" (See Wikipedia)

fashionista - a designer, promoter, or follower of the latest fashions: "a term used to define a woman with a penchant for shopping and a natural flair for combining both current and vintage fashionable trends. In today's Urban society, "fashionista" is not by any means a negative term ... a person devoted to fashion clothing, particularily unique or high fashion. A person not to be called a fashionista would be someone who obsessively follows trends. REAL fashionistas do not believe in trends" (See Urban Dictionary)

fashion victim - a person "vulnerable to faddishness and materialism, two of the widely recognized excesses of fashion, and consequently are at the mercy of society's prejudices or of the commercial interest of the fashion industry, or of both. According to Versace, 'When a woman alters her look too much from season to season, she becomes a fashion victim'" (See Wikipedia)

fret - worry about something
fashionistas fretting - a follower of the latest fashion worrying about ... their clothes (probably)

homeowners worried about being eaten by an escaped croc

international - ระหว่างประเทศ between countries
brands - products with well-established names that people remember, that create a certain image and expectations about the product
international fashion brands

source (noun) - the place or person something comes from or starts at ต้นกำเนิด, แหล่งกำเนิด
source (verb) - when a business gets materials, parts or products from a certain place

registered - officially recorded as a business with the government (and given permission to operate) (
nationwide - throughout the whole country, including the whole country ทั่วทั้งประเทศ ทั่วประเทศ
around 700,000 crocodiles are raised in 22 farms registered with the Fisheries Department nationwide

hide - the skin of a large animal such as a cow, horse, elephant or crocodile (See Wikipedia)
crocodile hides

in demand - when people need and want to buy a certain good or service
in high demand - many people want or need it
commodity - a thing that is useful or has a useful quality (example: time is a precious commodity) commodity in high demand

global -  all over the world, including the whole world ทั้งโลก ทั่วโลก
crocodile hides are a commodity in high demand in the global market

accessory - fashion accessory, decorative items a person wears in addition to their clothes such as "jewelery, gloves, handbags, hats, belts, scarves, wigs, watches, sunglasses, pins, stockings, bow ties, leg warmers, leggings, neckties, suspenders, and tights. Accessories can add color, style and class to an outfit, and create a certain look, but they can also have a practical function: handbags can be used to carry small items such as cash, hats protect the face in bad weather, and gloves keep hands warm... Designer labels on accessories are perceived by some as an indicator of social status. (See Wikipedia)

processed - treated in some way, e.g., treated with chemicals, cut, etc.
processed foods - food that has been turned into a product that can be sold in stores through "food processing" in a factory (See Wikipedia)

cowboy boots - a style of horse riding boot, worn in the past by American cowboys: "they have a high heel, rounded to pointed toe, high shaft, and, traditionally, no lacing. Cowboy boots are normally made from cowhide leather but are also sometimes made from 'exotic' skins such as alligator, snake, ostrich, lizard, eel, elephant, sting ray, elk, buffalo, and the like" (See Wikipedia)

encouraged - having more confidence or hope about something มีกำลังใจ

abdomen - the lower part of a person's or animal's body, which contains the stomach, bowels and other organs, or the end of an insect's body ท้อง
abdomen and hides of crocodylus porosus