For the first time in many weeks, politics overtook the floods in front page interest as a rumoured royal pardon for former PM Thaksin Shinawatra provoked an angry reaction. 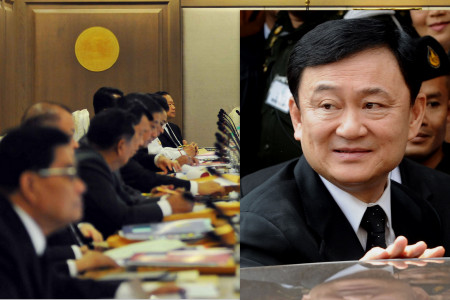 The government's proposed royal pardon for convicts has sparked an outcry from many quarters, with critics pouring scorn on the draft allegedly designed to prevent former prime minister Thaksin Shinawatra from serving a jail term.

The anti-Thaksin People's Alliance for Democracy said it will meet soon to decide what action to take against the proposed pardon.

Speaking to supporters in the United States, the alliance co-leader Sondhi Limthongkul deplored the pardon plan which he said has piled pressure on the monarchy.

Mr Sondhi claimed the Pheu Thai Party was blatantly trying to destroy the rule of law by using the proposed pardon as a pretext. He said Pheu Thai and the coalition parties are teaming up to undo the wrongs of Thaksin.

"This is the most despicable act," he said.

Mr Sondhi said the PAD would "not sit idly by".

The PAD's statement came as nearly 20,000 (80,000 this morning) people signed up to a Facebook account opened by well-known television news anchor Kanok Ratwongsakul yesterday to voice opposition to the decree.

Some of the opponents suggested in their online message that a mass rally be organised to oppose the draft.

Kaewsun Atibhodhi, a former investigator into corruption during the Thaksin government, and his Siam Samakkhi group also protested against the royal decree proposal.

The Supreme Court sentenced Thaksin to two years imprisonment for helping his wife purchase a plot of government land off Ratchadapisek Road in 2003.

Thaksin fled the country before the Supreme Court announced the jail sentence in 2008.

Thaksin has never served time in jail. Mr Kaewsun said the royal decree was unconstitutional because it ran counter to the court's ruling.

He said the royal decree was designed to benefit Thaksin because the ban on convicts found guilty of corruption was excluded. Earlier, convicts prosecuted for corruption were not eligible for a royal pardon.

"How dare you exercise the limited power of the executive to overpower the judiciary for the interest of one man," Mr Kaewsun said.

He said the tactic was worse than he could imagine because it dealt a blow to the power of the judiciary and intentionally violated the constitution.

Government sources have said the draft was expected to benefit some 26,000 jail convicts on the occasion of His Majesty the King's birthday on Dec 5. But critics claimed the decree was designed more to benefit Thaksin because it did not exclude persons convicted for corruption.

Mr Kaewsun called for the whole cabinet to be impeached, saying if it stayed, it would amend the constitution to free Thaksin from many other corruption cases. He also recommended Prime Minister Yingluck Shinawatra be impeached and said that as the prime minister, she could not deny responsibility for the planned decree.

Democrats argued the draft would undermine the justice system and divide society further.

Democrat chief and opposition leader Abhisit Vejjajiva said the planned royal decree would undermine the justice system as it would allow Thaksin to go free without serving his jail term.

By allowing people convicted of corruption to benefit, the government was sending a signal that corruption was acceptable, Mr Abhisit said.

You can read the full story here: http://bit.ly/rthFVH

cabinet – the group of government ministers who make and approve government policy คณะรัฐมนตรี
apparent – seeming to be something although it may not be real ดูเหมือนว่า, ตามที่เห็นภายนอก
decree – an official decision or order made by a leader or government พระราชกฤษฎีกา
pardon – an official decision to forgive someone for  committing a crime and to free them from full or further punishment การอภัยโทษ
fury – extreme anger ความโกรธจัด
scorn – a very strong feeling of no respect for someone or something that you think is stupid or has no value การเหยียดหยาม, การดูถูก
erupt – to start suddenly ปะทุขึ้น
slam – to strongly criticise someone or something  วิพากษ์วิจารณ์อย่างรุนแรง
draft – written for consideration, but not yet in its final form ฉบับร่าง
unconstitutional – against the rules stated in the constitution ไม่เป็นไปตามรัฐธรรมนูญ
proposed – suggested as an idea for a group to consider ถูกเสนอ
convict – someone who is or has been in prison because they have committed a crime นักโทษ, ผู้ที่ถูกตัดสินว่ามีความผิด
spark – to make something happen, especially something bad ก่อให้เกิด
quarters – a group of people กลุ่มคน
critics – people who don’t like something and who state their opinion about it  นักวิจารณ์
allegedly – claimed to have done something wrong, but not yet proven ที่กล่าวหา
jail term – the length of time a person is required to spend in jail
People’s Alliance for Democracy – the union of several groups protesting against the Samak, Somchai and Abhisit governments and which staged large protests against the Thaksin government as well พันธมิตรประชาชนเพื่อประชาธิปไตย
deplore – to dislike something very much, often because you think it is highly improper คัดค้าน  สังเวชใจ  เสียใจ
pile – to put something on top of something else กอง
pressure – a worried feeling that you get when you have to deal with a difficult or complicated situation ความกดดัน
the monarchy – the royal institution (higher institution); the throne; the crown ระบอบประชาธิปไตยอันมีพระมหากษัตริย์เป็นประมุข
blatantly – in an obvious or open way โจ่งแจ้ง โอ้อวด อึกทึก
pretext – a false reason that you give for doing something, usually something bad, in order to hide the real reason; an excuse ข้ออ้าง, ข้อแก้ตัว
coalition party – one of the political parties making up the government พรรคร่วมรัฐบาล
despicable – very unpleasant or evil  เลวทราม, ชั่วร้าย
idly – doing nothing อย่างขี้เกียจ
anchor – a man or woman who presents a television or radio programme, especially the news  ผู้ประกาศข่าว
opposition – strong disagreement with a plan or policy ความขัดแย้ง
opponent – someone who disagrees with you or who is competing against you ฝ่ายตรงข้าม
mass rally – a very large public gathering of people to support someone or to protest against something การชุมนุมใหญ่
investigator – someone whose job is to officially find out the facts about something – ผู้สอบสวน,  ผู้สำรวจ, ผู้ตรวจสอบ
supreme court – the highest court in a country ศาลฎีกา, ศาลสูงสุด
sentence – (of a court of law) to give a punishment ลงโทษ
imprisonment – the punishment of being put in prison จำคุก
plot – a piece of land used for a particular purpose ที่ดินแปลงเล็ก
fled (past of flee) – escaped; left an area very quickly because of a danger there หนีไป
run counter to – to go against ต้าน, แย้ง
ruling – a decision by a court of law คำตัดสิน คำชี้ขาด
benefit – to help someone มีประโยชน์ต่อ
ban – officially not allowing someone to do something การห้ามอย่างเป็นทางการ
find guilty – to prove in a court of law that someone has committed a crime พิสูจน์ว่ามีความผิด
exclude – to intentionally not include something แยกออกไป
prosecute – to official accuse someone of a crime and to try to prove them guilty in a court of law ดำเนินคดี ฟ้องร้อง ซักฟอก
eligible – allowed by rules or laws to do something or to receive something มีสิทธิตามกฎหมาย
dare – to be brave enough to do something  กล้า
executive (branch) – the part of the government that has the power and responsibility for the daily working of government agencies ฝ่ายบริหารของรัฐบาล
overpower – to defeat someone  ครอบครอง, เอาชนะ (ด้วยพละกำลัง)
judiciary – the part of a country's government which is responsible for its legal system and which consists of all the judges in the country's courts of law คณะตุลาการ, คณะผู้พิพากษา
tactic – a planned way of doing something ยุทธวิธี
imagine – to form a picture of something or someone in your mind นึกคิด, จินตนาการ, นึกฝัน
blow – an event that damages your chances of success สิ่งที่ทำให้เกิดความเสียหาย
deal a blow to – to cause serious damage to ทำให้เกิดความเสียหายร้ายแรงกับ
intentionally – deliberately; done purposely อย่างตั้งใจ
violation – an action that is against a law, agreement, principle, etc.  การฝ่าฝืนกฎหมาย
source – someone who gives information แหล่งข่าว
impeach – to formally accuse a public official of a serious crime relating to their job กล่าวโทษเจ้าหน้าที่รัฐว่าทำผิดศีลธรรมหรือจรรยาบรรณ
amend – to make changes to a document, law, agreement, etc. especially in order to improve it การแก้ไข
recommend – to advise someone that they should do something  แนะนำ
deny – to say that you did not do something that someone has accused you of doing ปฏิเสธ
responsibility – deserving to be blamed for something that has happened ความรับผิดชอบ
undermine – to make something or someone become gradually less effective or successful ทำให้อ่อนลง,ทำลายทีละน้อย,ทำลายอย่างลับ
opposition – the political party or parties that are not part of the government ฝ่ายค้าน
signal – to be a sign that something exists or is likely to happen ส่งสัญญาณ