Although only one-fifth of Wat Suan Kaew's 160-rai area has dried out, temple helpers have already begun restoration work. 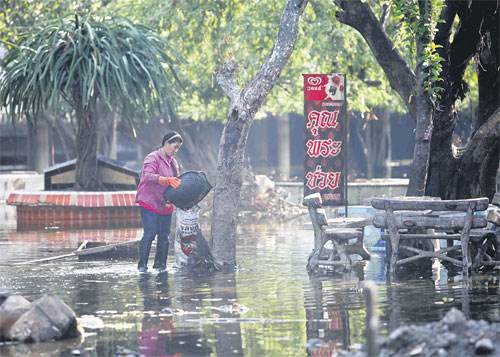 A temple helper removes garbage in Wat Suan Kaew in Nonthaburi province. Most of the temple is still flooded, but staff and devotees have begun to clean up those areas of the compound that have started to dry out. CHANAT KATANYU

Although only one-fifth of Wat Suan Kaew's 160-rai area has dried out, temple helpers have already begun restoration work, especially on its heavily damaged orchard, one of its main sources of income.

Phra Payom Kalayano, the abbot of Wat Suan Kaew in Nonthaburi province, said it was decided to launch flood recovery plans even though only 30 rai of its 160-rai are dry.

The well-known temple and its Suan Kaew Foundation has served as a spiritual and physical sanctuary for people as well as animals. It also provides agricultural demonstration programmes and vocational workshops to the underprivileged.

During the floods, it became a shelter for flood victims before succumbing to the deluge itself.

The temple's flood defence system failed on Oct 23 and all of its grounds were quickly inundated, causing several million baht in damage. Structurally, the damage to the main buildings was minimal and most of the occupants were relocated to the temple's other branches.

But its orchard, containing many varieties of profitable fruit and vegetables, was a total loss. Produce sales are one of the temple's main sources of income.

"The biggest problem we have right now is removing dead trees. Taking out the dead roots will be difficult and expensive," Phra Payom said.

Because of the large number of dead trees scattered around a relatively small area with limited manoeuverability made it difficult, if not impractical, to bring in heavy machinery. Removing them by hand will be time-consuming, but the temple has no choice, he said.

Phra Payom estimated the cost of the orchard restoration at about 5 million baht.

The abbot said about 99% of the temple's green area was lost to the floods. Among the highly profitable fruits that were wiped out are durian, which could generate up to 20,000 baht in revenue a day.

Durian trees are susceptible to flooding and all the mature fruit-bearing trees had died. Only some of the hardier fruit trees such as the rose apple survived.

Phra Payom said the temple would need to revive the fruit orchard as quickly as possible so it can restore its revenue stream.

Its plan is to plant fast-growing trees like banana first. Slow-growing trees would also be planted, but it would take more time for them to mature and bear fruit. Phra Payom said the durian plantation might take 10 years before it becomes profitable again.

The abbot said the temple was able to absorb the loss of income because of support it was receiving from its seven branches that were spared being flooded. He is confident the temple will recover from the disaster.

"The most important issue people in Thailand face is a lack of land to do any farming or business. We still have our land and as long as we have it we will persevere," he said.

He expects the temple to return to its original state in five years. As for future flood defence and preparation, he said little could be done to cope with flooding of the magnitude seen this year.

At present, floodwater has dropped almost a metre from its peak level of about 2m, allowing volunteers and devotees to begin cleaning the dry parts of the temple.

Alcohol in Bangkok restaurants possibly on the table, says CCSA