Thai charter airline makes history by being the first to employee ladyboys as flight attendants serving passengers on flights. 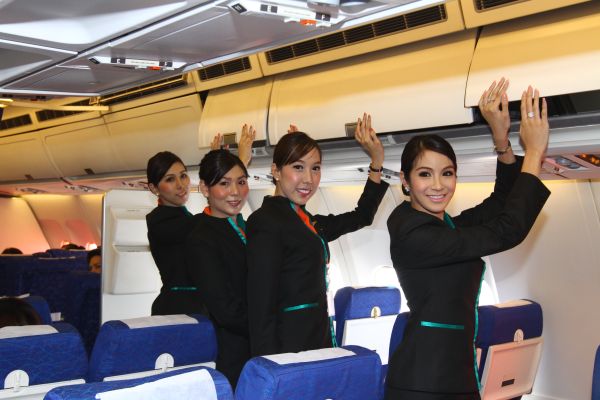 The four ladyboy flight attendants for PC Air, which plans to launch its inaugural flight on Dec 24. (Photo: Boonsong Kositchotethana)

Aviation: Ladyboys too hot to handle, From immigration questions to worries about social acceptance, many airline executives show they are not ready to hire the third gender by Boonsong Kositchotethana, Deputy Editor Business

While the start-up carrier PC Air has defied an industry norm by hiring four transsexuals as flight attendants, more established airlines in Thailand are reluctant to follow suit.

Senior executives of several leading carriers, who spoke to the Bangkok Post on the condition of anonymity because of the sensitive nature of the matter, were not quite ready to bring the third gender on board.

The executives acknowledged the airline industry has not openly adopted them for frontline service.

While Thailand has a relatively high level of social acceptance of male-to-female transgenders, executives said they see the adoption as more problematic than good, but admit it could be a positive marketing gimmick.

PC Air, the privately owned Thai charter airline due to start commercial operations this Saturday, garnered extensive international publicity by billing itself as the world's first carrier to employ "ladyboys" as cabin attendants.

The top constraint executives listed was these transgenders being listed as male on their ID cards. Many immigration officers have a liberal outlook, but they could be stopped or refused entry in more conservative countries.

Their passports will list them as male, and countries with strict rules like China and Arab nations may be puzzled or confused and less likely to offer a smooth passage. This could potentially affect airline flight operations.

Executives also admitted several airlines were too conservative to let ladyboys be associated with their brand image.

"Though social acceptance of transsexuals is increasing, there is still a cultural barrier for them in our society," said an airline veteran with over 30 years experience.

A lot of our passengers, especially conservative Thais with families, may shun flying with us.

Another senior executive of the same airline asked: "Do you see other established service-related enterprises like five-star hotels openly embracing katoeys as staff ? No.

"While they are more visible at cosmetics shops and health stores in Thailand, it does not mean they will be welcomed with open arms in other service sectors anytime soon," she added.

"What is the point of hiring transgenders as cabin attendants?" an airline founder asked.

"There are thousands of men and women who are eager to accept these jobs," he added.

Transgenders often don't make it past the first step in the application process because of their identity, an executive of a no-frills carrier pointed out.

Most airlines, even PC Air, state the gender they want when hiring - male, female or both - and anything in between is disqualified by screening officers.

PC Air made an exception by specifying ladyboy applicants have qualifications similar to female attendants. The ladyboys are to be like women in how they walk and talk, having a feminine voice and the right attitude.

But a few executives felt transgenders would work harder to prove their professionalism and skill on the job.

Piyo Chantraporn, the 48-year-old president of PC Air who prefers to be called Peter Chan, said management prides itself on its equal-opportunity policy for transsexuals, repeatedly denying the transgender recruitment was done for the sake of publicity.

Among its first batch of 30 cabin attendants are four transsexuals, 19 females and seven males, all of whom were officially certified.

One of the four transgenders is Thanyarat Chirapatpakorn, who was crowned Miss Tiffany Universe 2007 and is best known as a model and soap opera actress who uses the name "Nong Film".

Nong Film, who was featured prominently in PC Air's advertisements, said getting a cabin attendant job fulfilled a childhood dream.

"It's a dream come true and I will work hard to prove my professionalism," said the 23-year-old.

PC Air has one jet, an Airbus 310-222, and plans to acquire two more wide-body planes, likely A300-600s, in the second quarter of next year as it aims to become a scheduled flight operator.

(Source: Bangkok Post, Aviation, Ladyboys too hot to handle, From immigration questions to worries about social acceptance, many airline executives show they are not ready to hire the third gender, 21/12/2011, Boonsong Kositchotethana, Deputy Editor Business, link)

gender - sex, the fact of being either male or female เพศ (See Wikipedia)

third gender - people who are considered to be neither man nor woman, "although biology determines genetically whether a human being is male or female (on the basis of the XX or XY or a variation thereof chromosomes), the state of being neither a man or a woman is sometimes considered in relation to the individual's gender role in society, gender identity, sexual orientation or any other characteristic. To different cultures or individuals, a third gender or sex may represent an intermediate state between men and women, a state of being both (such as 'the spirit of a man in the body of a woman'), the state of being neither (neuter), the ability to cross or swap genders, another category altogether independent of men and women" the hijras of India, Bangladesh and Pakistan who have gained legal identity, Fa'afafine of Polynesia, and the Sworn virgins of the Balkans are all examples เพศที่สาม (See Wikipedia)
transgender -  people who are "beyond gender", when the gender that a person considers themselves (woman, man, neither or both) does not match their biological or genetic sex (male, female); does not always imply anything about sexuality, transgender people may identify themselves as heterosexual, homosexual, bisexual, pansexual, polysexual, or asexual (See Wikipedia)
transsexual - same as "transgender" (See Wikipedia)

too hot to handle - possible meanings: 1. the issue is very controversial and likely to cause disagreement and angry reactions; 2. the ladyboy air hostesses are very sexy

defy - to not act as people expect
defied an industry norm

sensitive - needed to be dealt with very carefully to not cause anger or offence ที่ละเอียดอ่อน
nature - the basic quality or feature of something ลักษณะที่แท้จริงของสิ่งต่างๆ, ธรรมชาติ
matter - a situation or subject which is being dealt with or considered เรื่อง, ภารกิจ, งาน something that you are discussing, considering or dealing with สิ่งที่พูดถึง ประเด็นที่พูดถึง
the sensitive nature of the matter - the subject could cause disagreement and argument

board - to get onto a ship, aircraft, train, or bus ขึ้น(เรือ รถเมล์ รถไฟ เครื่องบิน)
bring on board - bring onto the airplane
not quite ready - not ready to do now (maybe in the future)
not quite ready to bring the third gender on board

openly - doing in way that everyone can see, not hiding
openly adopted - started doing something (in a way that everyone can see that you are doing it; not hidden)
acknowledged - accepted that something is true frontline service - working with customers directly (over the phone, at the ticket counter, in the airplane, etc)
the executives acknowledged the airline industry has not openly adopted them for frontline service.
female - of a woman สำหรับผู้หญิง
Thailand has a relatively high level of social acceptance of male-to-female transgenders

adoption - starting to use a new system
problematic - causing or involving problems ก่อปัญหา
admit - to agree that something is true, especially when you are unhappy, sorry or surprised about it ยอมรับ

positive - something good ในแง่ดี สิ่งที่ดี ที่ดี hopeful and confident, or giving cause for hope and confidence ซึ่งมองในแง่ดี
gimmick - an action or product feature created to attract attention and publicity (not really useful in any way)  marketing gimmick - a gimmick used to sell a product or service
a positive marketing gimmick

employ - to have someone work or do a job for you and pay them for it ว่าจ้าง, จ้าง

billing itself as - presenting itself in advertisements to customers as

garnered extensive international publicity by billing itself as the world's first carrier to employ "ladyboys" as cabin attendants.

officers - high ranking managers in a company (Photo on right of one of the first computers, the gigantic
immigration officers - immigration workers who check passports and enforce immigration laws at airports and borders of a country

refused entry - said that they cannot come into a place

potentially - may happen; possible in the future ที่อาจเกิดขึ้นได้

brand - a type of product made by a particular company ตรา, ยี่ห้อ
image - an opinion that people have about someone or something ภาพลักษณ์
several airlines were too conservative to let ladyboys be associated with their brand image.

social acceptance of transsexuals is increasing

barrier - anything that prevents people from being together or understanding each other อุปสรรค
cultural barrier - the culture of a society (traditions, customs, beliefs, practices) stops or prevents something from happening, will not accept something
there is still a cultural barrier for them in our society

shun - to deliberately avoid a person, place or activity
conservative Thais with families may shun flying with us.

enterprises - companies
staff - workers, employees พนักงาน
openly embracing as staff - accepting as staff  openly (with everyone knowing about it)
Do you see other established service-related enterprises like five-star hotels openly embracing katoeys as staff?
cosmetics - substances that you put on your face or body which are intended to improve its appearance เครื่องสำอาง (See Wikipedia)

founder - a person who establishes an institution, business, or organization ผู้ก่อตั้ง
an airline founder

eager - want to do very much; wanting to do or get something very much or enthusiastic about something that will happen กระตือรือร้น
eager to accept these jobs

process - a series of actions that you take in order to achieve a result แนวทางปฏิบัติ, กระบวน, วิธีการ
application process

identity - who someone is

frills - extra things, that are not really needed
a no-frills carrier - a cheap airline that does not have special services like meals on flights

disqualified - found to be not qualified (was qualified in the past, no longer qualified)
screening - checking before accepting, checking for problems, safety, or suitability
disqualified by screening officers

qualifications - the abilities, qualities, degrees, etc. that you need for a particular job or activity
attitude - the way you think and feel about something, as shown in behaviour
specifying ladyboy applicants have qualifications similar to female attendants. The ladyboys are to be like women in how they walk and talk, having a feminine voice and the right attitude.

a few executives felt transgenders would work harder to prove their professionalism and skill on the job.

prides itself on - is proud of something they do

opportunity - a situation when it is possible to do something that you want to do (See glossary)
policy - a set of plans or action agreed on by a government, political party, business, or other group นโยบาย  a plan of action to guide decisions and achieve outcomes (See Wikipedia)
equal-opportunity policy - when everyone (male, female, kathoey) get "equal opportunity" (treated the same) in applying for a job

done for the sake of publicity.

batch - a group of things or people dealt with at the same time or considered similar in type ชุด, กลุ่ม
its first batch of 30 cabin attendants

acquire - to get; to obtain ได้มาซึ่ง
second quarter - April, May, June