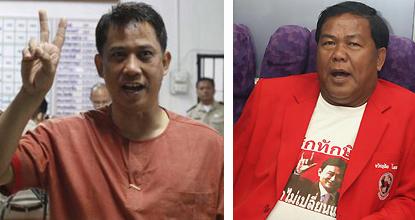 The Appeals Court has released red-shirt leader Arisman Pongruangrong on bail and he could be a free man today if he gets bail in a second case. Meanwhile, a second leader, Kwanchai Praipana, was not so lucky. 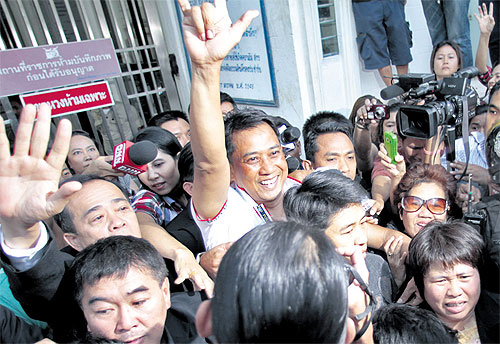 Arisman Pongruangrong, a key red shirt leader, waves to supporters after being released on bail from Bangkok Remand Prison yesterday. But he is behind bars again on another charge of defamation for which he will seek bail. RATTASEEMA PONGSEN

The Appeals Court has freed red shirt leader Arisman Pongruangrong after he provided 6 million baht in cash to back his bail release.

But as soon as he was lead outside, Mr Arisman was taken to Pracha Chuen Police Station to face other charges. He will remain behind bars until bail is sought today.

After being denied bail by the primary court in two earlier bids, the Appeals Court yesterday decided to release Mr Arisman, saying there was no evidence to show he would instigate violence again.

His surrender on Dec 7, despite his awareness that he was facing serious terrorism charges, convinced the court that he would not flee Thailand again.

Public prosecutors raised no objection to the bail request.

Mr Arisman, who called on red shirt demonstrators to launch arson attacks in Bangkok if the government used force to disperse them during last year's protests, had been on the run for 18 months, hiding mostly in Cambodia, after the rally ended in violence.

After his release, Mr Arisman was taken to Pracha Chuen Police Station to acknowledge a defamation charge filed against him by Democrat MP for Songkhla Sirichok Sopha. He will go to Songkhla today to seek bail. 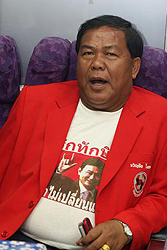 Meanwhile, the chairman of the Khon Rak Udon Group, Kwanchai Sarakham, or Praipana, has been jailed by the Udon Thani Court for his involvement in an attack by a group of red-shirts on People's Alliance for Democracy (PAD) demonstrators in Udon Thani province in 2008.

The attack took place on July 24, 2008 at Prachak Silpakhom Public Park in Muang district where the PAD was holding a rally. A number of people were injured,  some seriously.

The court dropped the attempted murder charge against Kwanchai, but found him guilty of the other charges, and initially sentenced him to four years imprisonment without suspension and a fine of 350,000 baht.

Because of his confession, the jail term was commuted to two years and eight months.

After hearing the verdict, Kwanchai filed a request for bail, offering 200,000 baht as collateral.

He said he would appeal  the verdict.

release – to allow someone to go free ปล่อยตัว
bail – money that is given to a court when someone is allowed to stay out of prison until their trial. If they do not return for the trial, the court keeps the money  เงินประกัน; การประกันตัว
remand prison – a place where people are kept while they wait for the date of their trial สถานที่ขังระหว่างรอการพิจารณาคดี
behind bars – in prison การจำคุก
charge – an official statement accusing someone of committing a crime ข้อหา
defamation – the offence of writing or saying something bad about someone that is not true and makes people have a bad opinion of them การใส่ร้าย
bail (out) – to pay somebody's bail for them ประกันตัวออกไป
detained – kept in a place and not allowed to leave กักตัว ควบคุมตัวหรือฝากขัง
Appeals Court (Court of Appeals) – a court that decides requests that a decision made by a lower court be changed ศาลอุทธรณ์
cash – money in the form of notes or coins เงินสด
sought (past tense of seek) – asked for something, or to tried to get something พยายามได้มา
deny bail – (of a court) to refuse to allow someone to go free on bail ไม่ให้ประกันตัว)
bid – an attempt to do something ความพยายาม
evidence – facts, signs or objects that make you believe that something is true หลักฐาน,ข้อแสดง
instigate – to cause something bad to happen; to make something start or happen, usually something official ก่อให้เกิด, กระตุ้น
violence – physical force with the deliberate intention of causing damage to property or injury or death to people ความรุนแรง
surrender – giving yourself up การยอมจำนน
awareness – the state of knowing about something การรับรู้, การทราบ
terrorism – the use of violence to achieve political aims การใช้ความรุนแรงเพื่อข้อเรียกร้องทางการเมือง
convince – to make somebody/yourself believe that something is true; to persuade somebody to do something ทำให้เชื่อ, ทำให้แน่ใจ, ชักจูง
flee – to leave a place or person quickly because you are afraid of possible danger หนี อพยพ
prosecutor – a lawyer whose job is to prove in court that someone accused of a crime is guilty อัยการ
objection – a statement that shows that you disagree with a plan, or a reason for your disagreement  – a statement that shows that you disagree with a plan, or a reason for your disagreement  การคัดค้าน, การไม่เห็นด้วย
demonstrators – people who march with other people in public to show that they support or oppose something ผู้ชุมนุมประท้วง
launch – to start something เริ่มทำ
arson – the illegal use of fire to destroy a house, building, or property การลอบวางเพลิง
disperse – to cause a crowd of people to separate and go away in different directions สลายฝูงชน
rally – a large public gathering of people to support someone or to protest against something การชุมนุม
acknowledge – to let someone know you have received something or the you understand what it is  รับทราบ
file – to take official action, in this case, to make an official complaint ยื่นคำร้อง
party list (proportional representation system) – a system that gives each party in an election a number of seats in relation to the number of votes its candidates receive ระบบสัดส่วน, ระบบปาร์ตี้ลิสต์
valuable – very important to you; worth a lot of money มีค่า
meanwhile – at the same time ในเวลาเดียวกัน
involvement – the act or process of taking part in something การเกี่ยวข้อง
People’s Alliance for Democracy (PAD) – the union of several groups protesting against the Samak, Somchai and Abhisit governments and which staged large protests against the Thaksin government as well พันธมิตรประชาชนเพื่อประชาธิปไตย
injured – hurt in an accident or attack ซึ่งได้รับบาดเจ็บ
lawsuit – a case that a court is asked to decide involving a disagreement between two people or groups คดีที่ยื่นฟ้องต่อศาล
murder – the crime of intentionally killing a person ฆาตกรรม
assault – a physical attack on someone การทำร้าย
inflict – to cause something bad to happen to someone or something ทำให้เสียหาย
property – things, especially valuable things, that are owned by someone ทรัพย์สมบัติ, ทรัพย์สิน
guilty – proven to have committed the crime he was accused of (พบว่า) มีความผิดตามข้อกล่าวหา
initially – at first ในเบื้องต้น
sentence – (of a court of law) to give a punishment ลงโทษ
imprisonment – the punishment of being put in prison จำคุก
suspension (of a jail term) – a situation when the court decides that the person who has been proven guilty of a crime does not have to undergo the punishment given, usually under certain conditions การรอลงอาญา
fine – an amount of money that you have to pay because you have broken the law ค่าปรับ
confession – admitting that you have done something wrong or illegal การสารภาพผิด
commute (a punishment) – to change a punishment to one that is less severe ลดโทษ (รุนแรงให้น้อยลง)
verdict – a decision by a court of law คำพิพากษา
collateral – money or property that you agree to give to a a court if you fail to appear for trial หลักทรัพย์ค้ำประกัน