Life in the grand palace

A recently discovered 50-year-old manuscript gives us a fascinating glimpse into life in the Grand Palace during the reign of King Chulalongkorn.

Note: Six months after the publication of her biography Siamese Memoirs: The Life and Times of Pimsai Svasti last year, two additional boxes of the author’s writings and notes were found by her family, some unpublished, including this article written some 50 years ago based on an interview with Princess Chongchitrathanom Diskul, a daughter of Prince Damrong Rajanubhab.

This is just a short excerpt from a much longer article and once you read, I suspect you will want to read the full article: http://bit.ly/sqwzFg

Life in the grand palace

THE STORY OF PRINCESS CHONGCHITRA 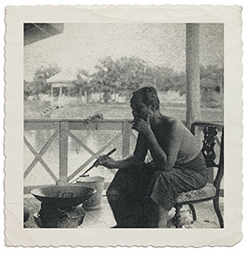 King Chulalongkorn is cooking at the summer palace in Bangkok.

"The highlights of the day were the King's meals. After his dinner at eight he worked all night. Then at dawn before he went to bed he had breakfast of rice soup. When he woke at about one or two in the afternoon he had his lunch. All his children had to come to him then. He would sit on the floor with a small table in front of him. The wives would sit in a line starting from the door and ending at his table. The dishes of food would be passed from one woman to another until it reached the King. He liked European, as well as Thai food. The Thai dishes might include a clear soup with pieces of meat and vegetables, a curry of chicken or fish, fried meat balls made of spiced pork and crab, fried sugar peas, fried fish, raw vegetables and nam prik (a sharp, pungent sauce for the fish and vegetables). The rice was served in a separate bowl. For dessert he would have at least three or four different sweets made of coconut milk and palm sugar, tapioca flour or glutinous rice, elegant meringue boats, fruit and a liquid sweet. The liquid sweet might be something simple like oranges in syrup scented with jasmine or something exotic like 'ladies' finger nails', which are made of dough rolled into round little fingers two inches long with pointed ends and boiled in coconut milk and served with grated coconut, ground roasted sesame seeds mixed with sugar and a little salt.

''The King always said such nice things to people. After eating one of my special nam prik he said, 'You have prolonged my life. The nam prik was so good.' He challenged me to make the same nam prik again for the following day because he said that only expert cooks could make the same sauce perfectly every time. I don't want to boast but I did reproduce it again and again. 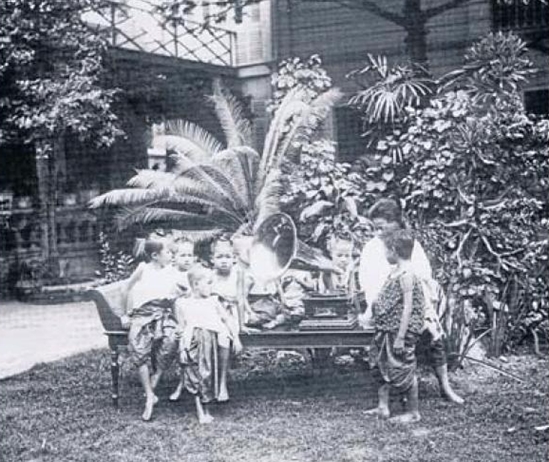 Princess Chongchitra, a daughter of HRH Prince Damrong Rajanuphab, with some of her younger sisters.

''Life in the Palace was very dull. Apart from the crazes we had for bicycling and photography and playing croquet, there wasn't much amusement. Physically it was very uncomfortable. There were thousands of women and children inside the palace, living in hundreds of buildings of various sizes made of brick or wood according to the importance and standing of the owner of the house. There was no running water or sewage system. The refuse and waste matter had to be carried out in buckets. In spite of this everyone was very clean. We washed many times a day in water scented by floating jasmine in it. We kept ourselves cool by covering ourselves with kaolin mixed into a paste with Siamese scent.

highlight – the most exciting, impressive, or interesting part of an event เหตุการณ์สำคัญ, จุดสำคัญ
dawn – the beginning of the day, when it begins to get light รุ่งอรุณ, เช้าตรู่
sharp – strong รุนแรง
pungent – describes a very strong smell or taste, sometimes one that is unpleasantly strong ฉุน
dessert – sweet food eaten at the end of a meal  ของหวาน, ขนมหวาน
tapioca (cassava) – a tropical plant with roots that can be cooked and eaten or made into flour มันสำปะหลัง
glutinous rice – sticky rice ข้าวเหนียว
elegant – attractive and showing a good sense of style สวยงาม, งดงาม, สละสลวย
meringue – a sweet white mixture made from egg whites and sugar, usually baked until crisp and used to make cakes ขนมอบชนิดหนึ่ง
scent – to cause to have a strong pleasant smell ทำให้มีกลิ่น
exotic – seeming exciting and unusual because it is connected with foreign countries  มาจากต่างประเทศ, มาจากดินแดนอื่น, มาจากภูมิภาคอื่น
fingernail – the thin hard layer that covers the outer tip of each finger เล็บมือ
dough – flour mixed with water and often yeast, fat or sugar so that it is ready for baking ส่วนผสมของแป้ง น้ำ และอื่นๆ เช่น ยีสต์, น้ำมัน, เนย, น้ำตาล (เพื่อนำไปอบขนมปัง)
grate – to rub food against a grater in order to cut it into small pieces  บดขยี้, เคี้ยว, ครูด
roasted – cooked in an oven without any oil  ย่าง, ปิ้ง, เผา
sesame – a tropical plant grown for its seeds and their oil, which are used in cooking งา
prolong – to cause to continue for a long time ยืดเวลาออกไป
challenge – to invite someone to do something difficult or risky ท้า
expert – someone who has a particular skill or who knows a lot about a particular subject ผู้เชี่ยวชาญ
boast – to proudly tell other people what you can do คุยโว, โว, โม้, โอ้อวด
reproduce – to produce something again; to make something happen again in the same way ทำซ้ำ, ทำใหม่
dull – not interesting or exciting น่าเบื่อ, ไม่น่าสนใจ
craze – an enthusiastic interest in something that is shared by many people but that usually does not last very long; a thing that people have a craze for ความนิยม (ในช่วงระยะสั้นๆ)
croquet – a game played on grass in which players use wooden hammers (called mallets) to knock wooden balls through a series of hoops (= curved wires) กีฬาชนิดหนึ่งบนลานหญ้าใช้ตะลุมพุก (mallets) ตีลูกไม้ลอดห่วง (wire-wickets)
amusement – a game, an activity, etc. that provides entertainment and pleasure กิจกรรมที่ให้ความบันเทิง
standing – the position or reputation of somebody/something within a group of people or in an organization; status ฐานะ, ตำแหน่ง
sewage – waste substances, especially waste from people’s bodies, removed from houses and other buildings by a system of large underground pipes called sewers สิ่งปฏิกูล, น้ำโสโครก
refuse – unwanted waste material, especially material that is regularly thrown away from a house, factory, etc.; rubbish ขยะ, ของเสีย
bucket – a container with an open top and a handle, often used for carrying liquids ถัง
kaolin – a soft white clay ดินขาว