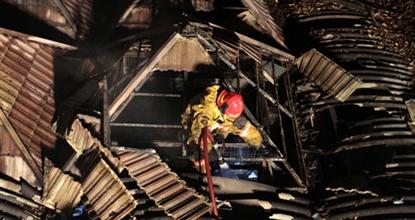 Police say a short circuit was the likely cause of a fire that gutted several book stalls at at Chatuchak Weekend Market, but arson was also possible. 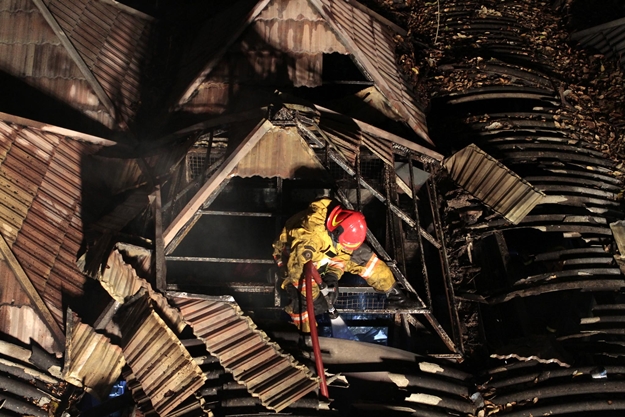 A fireman puts out the last of a fire which gutted several book stalls at the Chatuchak Weekend Market in Bangkok’s Chatuchak district yesterday. PATIPAT JANTHONG

Police say arson not ruled out after Chatuchak Market blaze

Police have not ruled out arson as the cause of a fire on Wednesday night at Chatuchak Weekend Market.

The blaze occurred just two days after the State Railway of Thailand (SRT) took over management of the market from the Bangkok Metropolitan Administration (BMA).

Several book stalls in a one-storey structure near gate No 32 were destroyed by the fire.

The blaze destroyed stalls Nos. 34, 35, 40 and 41, covering an area of about 25 square metres, reducing to ashes most of the used books in the shops' inventories.

Up to 10 fire trucks rushed to the scene and firefighters took 30 minutes to bring the blaze under control.

There were no injuries. 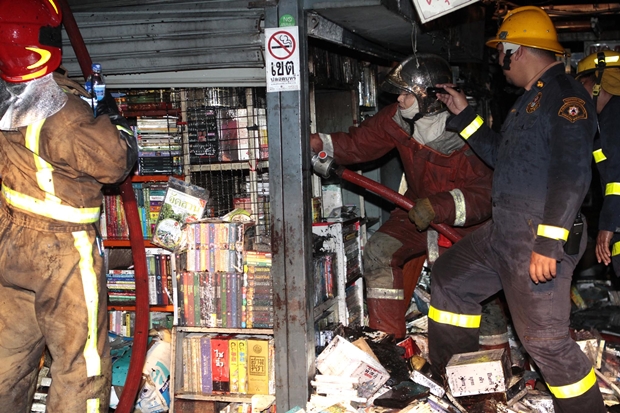 Firemen put out a fire in one of the book stalls. PATIPAT JANTHONG

Acting deputy Metropolitan Police Bureau chief Methee Kusolsarng said forensic police had examined the scene and suggested it could have been caused by an electrical short circuit as the fire appeared to have started at book stall No.40 and areas around electric sockets were badly damaged.

Witnesses said they saw flames and smoke coming from the shop before the fire spread quickly to nearby book stalls, Pol Maj Gen Methee said.

Commander of the MPB's Division 2, Pol Maj Gen Samroeng Suwanpong, said the cause of the fire was still under investigation and that police would look into whether the fire was linked to the management takeover of the market.

He also ordered investigators to check whether influential people reportedly extorting money from traders at the market were involved.

The SRT, which owns the land, took over the management of the market from City Hall on Jan 2 after the city administration refused to pay the new rate demanded for an extension of the lease. The market's lease, held by the BMA for decades, expired on Jan 1.

Deputy Transport Minister Chatt Kuldiloke yesterday said he has given instructions to the SRT that the market must be free from mafia gangs.

If the fire was caused by arson, those involved would face severe punishment, the deputy minister warned.

City Hall handed a key to enter the market to the SRT on Jan 2, but the state railway authority failed to lock the gates, Mr Pornthep said.

gut – to burn completely from the inside out ไหม้หมด
stall – a large table or a small building that is open at the front, used for selling things (or for giving people information) รถ หรือแผงขายของ
arson – the illegal use of fire to destroy a house, building, or property การลอบวางเพลิง
rule out – to stop considering something as a possibility ประกาศว่าเป็นสิ่งที่เป็นไปไม่ได้
blaze – a fire เพลิง
link – a connection ความเชื่อมโยงกัน
takeover – an act of taking control of a company, organisation, etc. การครอบครอง
dispute – a serious disagreement ความขัดแย้ง, การโต้เถียง
motive – a reason for doing something  แรงจูงใจ
Bangkok Metropolitan Administration (BMA) – the local government of Bangkok กรุงเทพมหานคร
ash – the grey powder that remains after something has burned   เถ้าถ่าน, ขี้เถ้
inventory – the products kept in a shop, warehouse, etc., in this case, books  สินค้าที่จัดเก็บในสต๊อก
scene – site; a place where something happens or happened สถานที่เกิดเหตุ
injury – physical damage done to a person or a part of their body อาการบาดเจ็บ
acting – doing the work of the usual person in a particular job while they are not there, or until a new person starts ที่รักษาการแทน
deputy – a person whose rank is immediately below that of the leader of an organisation รอง
metropolitan police – the police in responsible for a city ตำรวจนครบาล
forensic – relating to the use of scientific methods to solve  crimes or to find out why something happened เกี่ยวกับนิติวิทยาศาสตร์
suggest – to show that something is possibly true ชวนคิด
short circuit – a failure in an electrical circuit, when electricity travels along the wrong route because of damaged wires or a fault in the connections between the wires วงจรลัด, ช็อต
appear – to seem ดูเหมือนจะ, ดูเหมือนว่า
socket – a curved hollow space in the surface of something that another part fits into or moves around in เบ้าปลั๊กตัวเมีย
witness – a person who sees something happen  ผู้ที่เห็นเหตุการณ์
flames – the brightly burning gases that you see coming from a fire เปลวไฟ, เปลวเพลิง
spread – to affect or cover a larger area แพร่กระจาย
commander – a police offer of high rank ผู้บังคับบัญชา
investigation – the process of trying to find out all the details or facts about something in order to discover who or what caused it or how it happened การตรวจสอบหาข้อเท็จจริง
influential person – a person who has the power to affect a situation, especially in a bad way ผู้มีอิทธิพล
extort –to try to illegally obtain something by force or threat  รีดไถ
trader – someone who buys and sells things ผู้ค้า
involved – taking part or having a role in something เกี่ยวข้อง
administration – government รัฐบาล
refuse – to say you will not do something that someone has asked you to do ปฏิเสธ
rate – an amount of money that is paid or charged  ราคา, อัตรา
extension – making a period of time longer  การขยายออกไป
lease – a legal agreement in which you pay money in order to use a building, piece of land, vehicle, etc. for a period of time สัญญาเช่า
decade – a period of ten years  ทศวรรษ
expire – to come to an end or stop being in use หมดอายุ
severe – very serious and unpleasant รุนแรง
meanwhile – at the same time ในเวลาเดียวกัน
lax – not paying enough attention to rules, or not caring enough about quality or safety ละเลย
security – protection; systems providing for safety from attack, harm, or damage ระบบรักษาความปลอดภัย