High rents and unfair competition from traders who pay virtually no rent at all are making life difficult for many licensed tenants at Chatuchak Market. 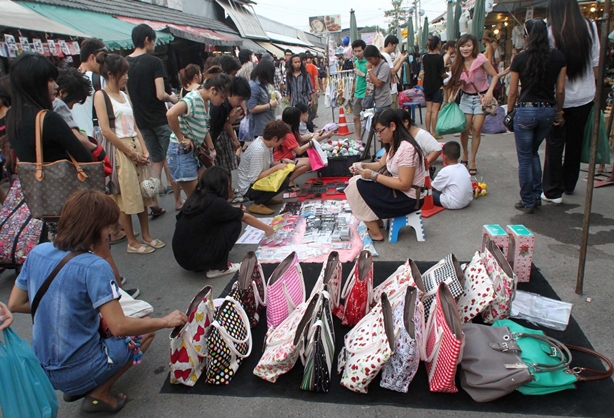 Shoppers visit goods stalls set up on an inner road at Chatuchak Weekend Market. Vendors are prohibited from setting up stalls in the area, but they shrug off the ban and pay about 100-200 baht rent a day to an unidentified group of people for the rights to sell goods there. PAWAT LAOPAISARNTAKSIN

High rents charged by unscrupulous landlords and unfair competition posed by traders who pay virtually no rent at all are making life difficult for many licensed tenants at Chatuchak Market.

A 28-year-old designer and owner of his own fashion brand, who gave his name only as Kie, is considering closing his shop at Chatuchak Market's Project 16 because the market seems unwilling to tackle these dual problems.

Kie sells clothes which he makes himself – which many traders might consider a dream job.

However, while Kie might have enjoyed some good days in the past, his profits are now taking such a battering that he thinks he might be better off elsewhere.

The growth of a small group of business people who lease stalls in large lots from the BMA – then sub-lease to tenants at vastly marked-up rents – have put a squeeze on profits.

Worse still is the spread of traders who sell their goods, flea market-style, on the market's inner roads.

They occupy space in the western part of the market, which is close to Kamphaengphet Road.

They are not licensed to be there, and sell their goods at much cheaper prices than tenants who are forced to pay rent. However, Kie said the market authorities have done little to shoo them away.

Kie sub-leases two small booths from a landlord who rents direct from the Bangkok Metropolitan Authority.

He knows the rent he pays is much higher than the rate which his landlord pays direct to the BMA.

Some primary lessors pay only 250 baht a month for a booth.

"A group of people here rent many booths and sub-let to others. This is common, and can be found at every big shopping centre, including Siam Square and Union Mall [in Bangkok's Lat Phrao area]," he said.

He has no contract with his landlord, just a verbal promise, and despite the market changing hands from the BMA to the SRT, still pays rent to his landlord as usual.

Kie's landlord is a former shop owner at Chatuchak Market, who knows the best locations in the market.

Rents which primary lessors charge range from 8,000 baht to 40,000 baht per booth per month, depending on location. For Kie, however, high rents are not a problem if sales are good.

"Rents are quite high but we can cope if we do not have competition from traders who set up on the market's inner road," he said.

"They can cut their prices for their products as they pay much cheaper rates than ours," he added.

They were allowed to set up stalls in the market three years ago, and since then competition has been fierce.

"I don't know who they [the vendors] pay, as there are no receipts," he said. "There are around 1,000 stalls on this road which were previously carparks."

The roadside traders sell their goods from 4pm to 9pm.

Knowing there are roadside stalls selling almost the same kinds of products in the evening but at lower prices, many shoppers delay their visit to Chatuchak Market until after 4pm.

"The pool of our potential customers is dropping," Kie lamented. He is willing to give the SRT a chance to manage the market to see if the traders' lot improves.

"Chatuchak Market is well-known not only in Thailand but worldwide. Building a market which is world famous cannot be done overnight," he said.

stall – a large table or cloth on the group, or a small building that is open at the front, used for selling things (or for giving people information) รถ หรือแผงขายของ
goods – things that are produced to be sold; possessions that can be moved สินค้า, สิ่งของ
vendor – someone who sells something, but not in a shop พ่อค้าแม่ค้าแผงลอย
prohibited –officially stopped from being done, especially by making it illegal (มีคำสั่ง)ห้าม
shrug off – to show that something does not worry or upset you ไม่เอาใจใส่, ไม่สนใจ
ban – an official statement ordering people not to do, sell or use something การห้าม
rent – paying money for the use of something for a period of time  ค่าเช่า
unidentified – not known (who someone is) ซึ่งไม่สามารถระบุชื่อได้
squeeze – a reduction in the amount of money, jobs, etc. available; a difficult situation caused by this การทำให้ลดน้อยลง
competition – a situation in which people or organizations compete, i.e., try to be more successful or better than somebody else who is trying to do the same as you  การแข่งขัน
trader – someone who buys and sells things ผู้ค้า
unscrupulous – behaving in a way that is dishonest or unfair in order to get what you want ที่ไม่ซื่อสัตย์
landlord – a person or organisation that owns a building or an area of land and is paid by other people for the use of it เจ้าของที่ดิน
pose – cause something, especially a problem or difficulty เป็นเหตุให้
virtually – almost เกือบจะ
licensed – having a license or the correct papers to do something ตีทะเบียน
tenant – a person who pays rent for the use of a room, building, land, etc. to the person who owns it ผู้เช่า
brand – a type of product made by a particular company or person ตรา, ยี่ห้อ
consider – to give careful thought to something before making a decision พิจารณา
unwilling – not wanting to do something and refusing to do it ไม่เต็มใจ, ไม่สมัครใจ
tackle – to make an organised and determine attempt to deal with a problem จัดการ
dual – having two parts or aspects ประกอบด้วยสองส่วน, เป็นคู่
profit – money that you make from selling goods and services after all your costs have been paid กำไร
battering – a damaging event; a violent attack   การทุบตีอย่างรุนแรง
lease – a legal agreement in which you pay money in order to use a building, piece of land, vehicle, etc. for a period of time สัญญาเช่า
lot – a group or set of things ชุด
sub-lease – to rent to someone else a property that you rent from the owner เช่าช่วง
vastly – very much อย่างมาก
mark up – to increase the price or cost of something ขึ้นราคาสินค้า
spread –  gradually affecting or covering a larger area การแพร่กระจาย
flea market – an outdoor market that sells second-hand (= old or used) goods at low prices ตลาดนัด ตลาดของมือสอง
occupy – to fill, exist in, or use a place or period of time ครอง
authorities – people who have the power to make decisions or enforce the law เจ้าหน้าที่ผู้มีอำนาจ
shoo – to make somebody/something go away or to another place ขับไล่
booth – a small tent or temporary structure at a market, an exhibition or a fairground, where you can buy things, get information or watch something แผงลอย,ห้องเล็ก, บูธ
Bangkok Metropolitan Administration (BMA) – the local government of Bangkok กรุงเทพมหานคร
lessor – a person who gives somebody the use of a building, an area of land, etc. on a lease ผู้ให้เช่า
common – ordinary; not unusual or special ธรรมดา
contract – an official written agreement สัญญา
verbal – using words ทางคำพูด
primary – main; most important; basic อันดับแรก
cope – to deal successfully with a difficult situation  รับมือกับ
fierce – very strong รุนแรง, ดุเดือด
receipt – a piece of paper which proves that money, goods or information have been received ใบเสร็จ, ใบรับ
delay – to make something happen at a later time than originally planned or expected เลื่อน
pool – a group of people available for something กลุ่มคน
potential – possible ความเป็นไปได้
lament – to show publicly that you feel sad or disappointed about something เสียใจ, เศร้าโศก,คร่ำครวญ
lot – a person's luck or situation in life โชคชะตา
overnight – suddenly or quickly, e.g., in one night ในเวลาอันสั้น, ข้ามคืน,อย่างรวดเร็ว