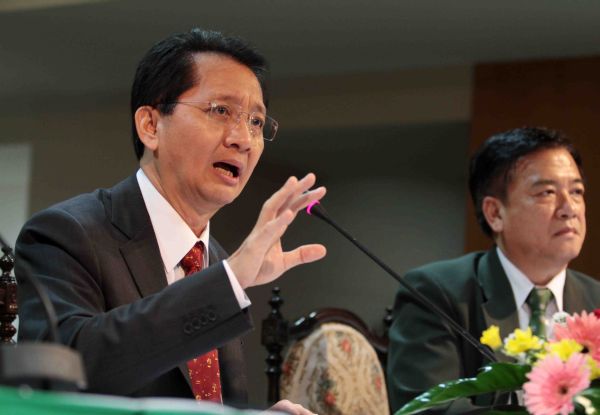 A proposal to cut the government's stakes in PTT Plc and Thai Airways could hurt the administration's image in the global financial markets, former finance minister Thirachai Phuvanatnaranubala has warned.

Mr Thirachai, who lost his job in this week's cabinet reshuffle, yesterday said investors could view the effort to lower the government shareholdings in the two firms as a veiled attempt to manipulate the country's public debt figures.

On Tuesday, Virabongsa Ramangkura, chairman of the Strategic Committee for Reconstruction and Future Development, said the government may sell a two per cent stake in PTT in an effort to shift the company's debt from the public debt record.

Liabilities for the two state enterprises are counted in the public debt figures, which stood at 4.28 trillion baht at the end of September.

"Greece is one example of a country that tried to camouflage its public debt. Once the market loses confidence, it takes time for it to return," Mr Thirachai said.

Mr Thirachai is a former central banker and securities regulator.

He urged Kittiratt Na-Ranong, who moved from the commerce portfolio to become the new finance minister, to try to get on well with economic agencies, particularly the Bank of Thailand. "In working with the central bank, one must maintain respect and be open to different views," he said.

public finance - "the study of the role of the government in the economy. The purview of public finance is considered to be threefold: governmental effects on (1) efficient allocation of resources, (2) distribution of income, and (3) macroeconomic stabilization" (See Wikipedia)

Thirachai Phuvanatnaranubala -  ธีระชัย ภูวนาถนรานุบาล (born 21 December 1951) is a Thai economist and politician: "From 2003 to 2011 he was the Secretary-General of the Securities and Exchange Commission of Thailand and Chairman of the ASEAN Capital Markets Forum (ACMF). From 2011 to 2012 he was the Finance Minister of Thailand, studied economics at the London School of Economics (LSE), graduating with a bachelor's degree in 1974. After that he joined the London office of Price Waterhouse. He qualified as a fellow of the Institute of Chartered Accountants in England and Wales, returned to Thailand to work at the Bank of Thailand in 1977. During his 26 years career at the central bank, he has covered financial institution supervision, monetary policy and financial markets. Moreover, he occupied himself with the enactment of several laws related to financial services. In 2003, Thirachai was Deputy Governor of the Bank of Thailand. Other positions held by Thirachai Phuvanatnaranubala included member of the board of Experts for Interpretation of Tax Code, the Thai Institute of Directors, the Financial Institution Policy Board at the Bank of Thailand, the National Credit Bureau Co., Ltd. and the Insurance Commission. Additionally, he served on various governemnt agencies' committees to study and recommend on policy issues" (See Wikipedia)

heed - pay attention to something (and the advice, suggestions, warnings and lessons that it gives you) เอาใจใส่, ระมัดระวัง

Greek government debt crisis - the debt problem at the heart of the "European sovereign debt crisis" that threatens to split apart the European Union's common currency,  "from late 2009, fears of a sovereign debt crisis developed among investors concerning Greece's ability to meet its debt obligations due to strong increase in government debt levels. This led to a crisis of confidence, indicated by a widening of bond yield spreads and risk insurance on credit default swaps compared to other countries, most importantly Germany. Downgrading of Greek government debt to junk bond status created alarm in financial markets. On 2 May 2010, the Eurozone countries and the International Monetary Fund agreed on a €110 billion loan for Greece, conditional on the implementation of harsh austerity measures.In October 2011, Eurozone leaders also agreed on a proposal to write off 50% of Greek debt owed to private creditors, increasing the EFSF to about €1 trillion and requiring European banks to achieve 9% capitalization to reduce the risk of contagion to other countries" (See Wikipedia)
European sovereign debt crisis - (See Wikipedia)

finance - borrow money to pay for something; provide money for something จัดหาเงินทุนให้
finance minister - an important position in the cabinet of an elected government, duties include the government budget, stimulating the economy and control of government finances (public finance) including tax collection and borrowing when taxes do not cover government spending (government deficit finance), also called financial affairs, the treasury, the economy, or economic affairs  (See Wikipedia)
outgoing Finance Minister - the Finance Minister who is ending their term (stepping down) for a new appointment to the position
PTT - "a Thai state-owned SET-listed oil and gas company. Formerly known as the Petroleum Authority of Thailand, it owns extensive submarine gas pipelines in the Gulf of Thailand, a network of LPG terminals throughout the Kingdom, and is involved in electricity generation, petrochemical products, oil and gas exploration and production, and gasoline retailing businesses. Affiliated companies include PTT Exploration and Production, PTT Global Chemical and PTT Green Energy. PTT is one of the largest corporations in the country and also the only company from Thailand that listed in the Fortune Global 500 companies, which ranks 155 among top 500 companies in the world and 25 in Asia as published by Fortune magazine in 2010"
also known as PTT Public Company Limited, PTT PCL, or simply PTT (ปตท.) (See Wikipedia)
THAI - Same as "Thai Airways" Thai Airways - Thailand's national airline and the largest airline in Thailand, formed in 1988, primarily operates out of Suvarnabhumi Airport, a founding member of the Star Alliance, the largest shareholder of the low-cost carrier Nok Air with a 49% stake, flies to 72 destinations in 35 countries, using a fleet of 92 aircraft, THAI was the recipient of Skytrax awards for Worlds Best Cabin Staff and Best Airline in the World in 2006, while placing second in the Airline of the Year category in 2007  การบินไทย (See Wikipedia)

national carrier - national airline, an airline that is either owned by the goverment or given special treatment(See Wikipedia) National carrier THAI is also 51 per cent held by the Finance Ministry, with debt of 208 billion baht at the end of September

shareholdings - the stock shares of a company that a person, company or government owns
figures - statistics, numbers describing the economy

investors could view the effort to lower the government shareholdings in the two firms as a veiled attempt to manipulate the country's public debt figures
liabilities - debts; money borrowed by a company; amounts of money that are owed by a company (balance sheet: liabilities + owners' equity = assets) หนี้สิน หนี้ขององค์กร
PTT reported liabilities of 756 billion baht at the end of September

effort - an attempt to do something ความพยายาม
veiled - disguised, doesn't look like what it really is; not direct but easily understood ที่อำพราง
veiled attempt to manipulate the country's public debt figures

shift - to change; to transfer; to move from one place to another เคลื่อนย้าย
record - displaying something in a way that all people can see or hear it (example: just for the record, I would like to say that ....., off-record remarks were made after the speech)  public debt record - the writing down and reporting of the public debt in a place where all can see it
the government may sell a two per cent stake in PTT in an effort to shift the company's debt from the public debt record

held by - owned by
PTT, now 51 per cent held by the government

state - government รัฐ
enterprises - companies
state enterprise - a company that is owned and operated by the government
liabilities for the two state enterprises are counted in the public debt figures, which stood at 4.28 trillion baht at the end of September.
central bank - the institution that controls the supply of money and credit in a country (monetary policy) and provides financial services to the government and other banks, in Thailand called the "Bank of Thailand (BOT)" (See Wikipedia)
central banker - a high level government official at the central bank, involved in making policy, usually highly trained in economics or finance

regulator - an official who makes certain that the companies who operate a system work effectively and fairly ผู้มีอำนาจควบคุม
securities - financial assets such as stock shares, bonds and derivatives (futures, options, etc)
securities regulator - a government agency or official who watches and overseas the buying and selling and issueing of securities to make sure there are no problems

Mr Thirachai is a former central banker and securities regulator
urged - advised someone very strongly about what action should be taken; encouraged people to do, tried to get them to do  วิงวอน
get on well with - be friends with (or at least not have conflicts and fights with)
he urged Kittiratt Na-Ranong to get on well with economic agencies

respect - to accept the importance of other people (what they they, their beliefs, their rights or customs) นับถือ
maintain - to keep รักษา keep in good condition
maintain respect - continue respecting, don't stop respecting open to different views - accepting the opinions and views that are different from your own (or at least willing to consider them)
in working with the central bank, one must maintain respect and be open to different views