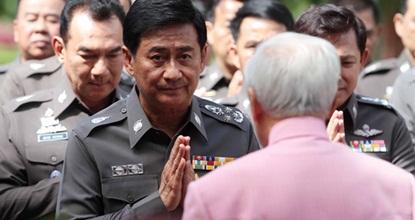 Pictures of leading government officials paying respect to Privy Council president Prem Tinsulanonda have been hard for some red-shirts to accept. Watching the PM and cabinet members doing the same may be impossible. 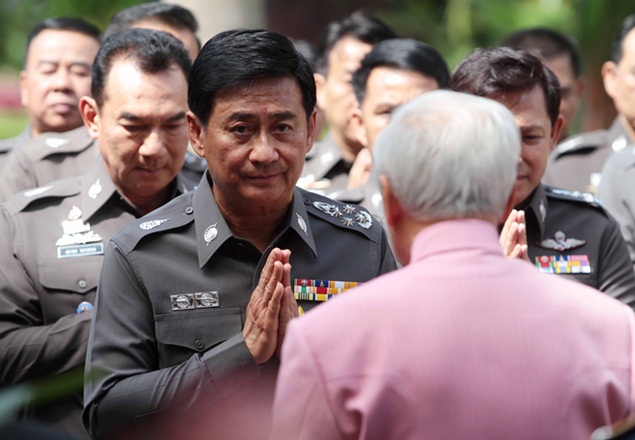 The Songkran holiday period has seen visits to Privy Council president Prem Tinsulanonda by the Defense Minister and the national police chief (pictured above). Next in line are Prime Minister Yingluck Shinawatra and some members of her cabinet. CHANAT KATANYU

Some faithful fear govt will 'collude with elite'

The red shirts are divided over the upcoming meeting between Prime Minister Yingluck Shinawatra, some cabinet ministers and Privy Council president Prem Tinsulanonda on Thursday.

Ms Yingluck will lead her deputies to call on Gen Prem and wish him a happy Thai New Year on the occasion of Songkran. They will also perform a rod nam dam hua, or blessing, ceremony for Gen Prem.

Red shirt core member Shinawat Haboonpad said yesterday some members of the movement were against the meeting and it remains to be seen if the meeting will turn into "collusion" with the ammart, or ruling elite.

But if the government compromises on its principles and colludes with the elite, it would be unacceptable to the red shirts, Mr Shinawat said.

It must not be forgotten how much the red shirts went through during the UDD's past protests before the government rose to power, he said.

It is understandable the government is trying to foster reconciliation, but reconciliation must go beyond individuals and it must correct the legal system to restore justice, Mr Shinawat said.

He said that Deputy Agriculture and Cooperatives Minister Nattawut Saikuar, who is also a UDD core leader, had led rallies against Gen Prem in the past. It would be a bitter pill for Mr Nattawut, as a cabinet minister, to swallow if he has to participate.

UDD chair Tida Tawornseth said the meeting had nothing to do with the red shirts and the UDD is only concerned about how the government will solve the country's problems.

She said she wants the government to release all red shirts detained in connection with the 2010 political violence and bring the real perpetrators to justice.

But Kwanchai Praipana, who heads the Khon Rak Udon group and is also a leading UDD member, said the planned meeting should not stir up any strong feelings among the red shirts.

Ms Yingluck yesterday said she will lead her deputies to seek Gen Prem's blessing during the Thursday ceremony and thank him for attending the government's gala dinner on Feb 10.

Ms Yingluck rejected suggestions that the government was trying to gain Gen Prem's support for its reconciliation bid.

She said he had stayed out of politics and that responsibility for handling political issues rests with the government.

Deputy Prime Minister Yutthasak Sasiprapa said that Gen Prem's response to Ms Yingluck's request for the meeting was a good sign for reconciliation and the political climate should improve.

Gen Yutthasak stressed that the government was duty-bound to restore national harmony.

Deputy Prime Minister Chalerm Yubamrung said Gen Prem is a respected figure and it would be proper to seek his blessing during the ceremony.

It was wrong to think that the meeting between the cabinet ministers and Gen Prem was politically motivated.

Democrat Party leader Abhisit Vejjajiva said yesterday that if the prime minister really wants reconciliation, she should take Mr Nattawut and Pheu Thai list MP and UDD core leader Jatuporn Prompan along with her and tell them to apologise to Gen Prem for criticising him during the UDD's past rallies.

Privy Council – the group of appointed advisors to the King of Thailand   สภาองคมนตรีไทย
cabinet – the group of government ministers who make and approve government policy คณะรัฐมนตรี
the faithful – loyal supporters  ผู้จงรักภักดี
collude – to act together secretly or illegally in order to deceive or cheat someone สมรู้ร่วมคิด
elite – the richest, most powerful, best educated or most highly trained group in a society คนที่มีอภิสิทธิ์ที่สุด
upcoming – happening soon; available soon ซึ่งกำลังจะเกิดขึ้น, ซึ่งกำลังจะมา
deputy – a person whose rank is immediately below that of the leader of an organisation รอง
occasion – a special event, ceremony or celebration โอกาส, งาน
blessing – God's help and protection, or a prayer asking for this การสวดให้พร, การให้พร
ceremony – a formal public event งานพิธี
core member – one of the most active or most important members of a group แกนนำ
movement – a group of people who share the same aim and work together to achieve it การเคลื่อนไหวเพื่อวัตถุประสงค์ทางการเมือง
United Front for Democracy Against Dictatorship (UDD) – the group originally formed to demonstrate against the 2006 coup and which supported the Somchai Wongsawat government against the PAD and which led the fight against the Abhisit government. They are known for wearing red shirts แนวร่วมประชาธิปไตยต่อต้านเผด็จการแห่งชาต
compromise – to risk harming or losing something important; to reduce in quality, value, or degree; to weaken or lower ยอมอ่อนข้อ
principle – a basic rule or belief about what is right หลักการ
protest – a meeting or rally, sometimes forceful or violent, of people who strongly disagree with something ชุมนุมประท้วง
foster – to encourage something to develop สนับสนุน
reconciliation – the process of creating a new and friendly relationship again with someone you argued with or fought with การปรองดอง
individual – a person considered separately rather than as part of a group บุคคล
legal – relating to the law or lawyers เกี่ยวกับกฎหมาย
restore – to cause a particular situation to exist again, especially a good one ฟื้นฟูสภาพ
justice – fairness in the way people are dealt with ความเป็นธรรม, ความถูกต้อง, ความยุติธรรม
rally – a large public gathering of people to support someone or to protest against something การชุมนุม
bitter pill to swallow – a fact or an event that is unpleasant and difficult to accept  เหตุการณ์ที่ยอมรับได้ยาก
participate – to take part in something เข้าร่วม
concerned – interested in something สนใจ
solve –  to successfully deal with a problem or difficult situation  แก้ปัญหา
release – to allow someone to go free ปล่อยตัว
detained – kept in a place and not allowed to leave กักตัว ควบคุมตัวหรือฝากขัง
violence – physical force with the deliberate intention of causing damage to property or injury or death to people ความรุนแรง
bring to justice – to put someone on trial in a court of law นำตัวมาดำเนินคดีตามกฎหมาย
perpetrator – someone who has committed a crime, or a violent or harmful act ผู้ก่อการ
stir up – to make someone feel upset or angry ก่อให้เกิดความขุ่นใจ
gala – a special public occasion at which there is a lot of entertainment, usually in the form of different types of performances งานกาลา, งานรื่นเริง
reject – to not agree with ปฏิเสธ ไม่ยอมรับ
suggestion – the possibility that something is true, or evidence showing that something may be true ข้อชวนคิด
bid – an attempt to do something ความพยายาม
responsibility – a duty ความรับผิดชอบ
handle – to be able deal with a situation ควบคุมได้, จัดการได้
issue – a problem that needs to be considered ประเด็น
climate – a general attitude or feeling; an atmosphere or a situation which exists in a particular place บรรยากาศ
improve – to get better  ดีขึ้น
stress – to emphasise something; to say that something is important เน้นย้ำ
duty-bound – required by your job or assignment ขอบข่ายหน้าที่หรืองานที่ได้รับมอบหมาย
harmony – when people are peaceful and agree with each other, or when things seem right or suitable together ความสามัคคี
respected – admired by many people for your qualities or achievements   ที่เคารพ
figure – someone who is important in some way บุคคลสำคัญ
proper – right, appropriate or correct; according to the rules  เหมาะสม
motivated – done for a particular reason มีแรงจูงใจ ถูกโน้มน้าวใจ
(party) list – a system that gives each party in an election a number of seats in relation to the number of votes its candidates receive ระบบสัดส่วน, ระบบปาร์ตี้ลิสต์
apologise – to say you are sorry for doing something wrong or for causing a problem ขอโทษ
criticise – to say that you disapprove of somebody/something; to say what you do not like or think is wrong about somebody/something วิจารณ์, ติเตียน,จับผิด