The PM’s visit to General Prem yesterday was full of symbolism but it remains to be seen if reconciliation will result. Opinions vary. 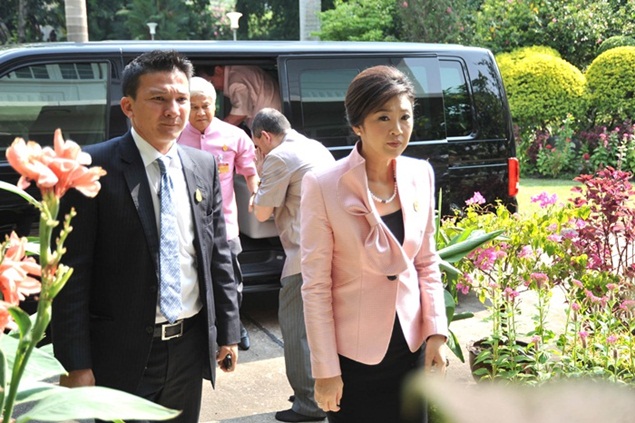 After the ceremony, which lasted about 15 minutes, Gen Prem held a discussion with Ms Yingluck for about half an hour. 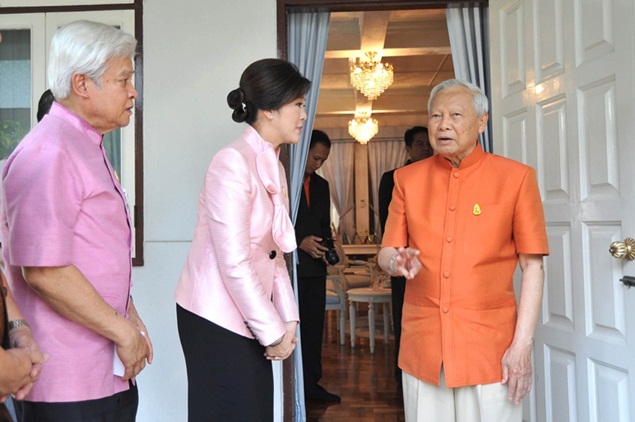 The meeting between Ms Yingluck and Gen Prem was met with chagrin by the red shirts yesterday.

On thaienews.blogspot.com, pictures showing a merit-making ceremony to mark the birthday yesterday of Kamonkade Akkahad – the nurse who was shot dead at Wat Pathum Wanaram on May 19, 2010 during the military crackdown on the anti-government protests – was posted yesterday. The ceremony was held at Ratchaprasong intersection.

Criticism of Gen Prem by red shirt leader and Pheu Thai list MP Jatuporn Prompan during a red shirt rally in 2009 was also posted on the website.

Shinawat Haboonpad, a red shirt leader, said that many of his cohorts had phoned him to complain about the Prem meeting. He said the red shirts were severely disappointed about the meeting because they had lost their jobs, their husbands and children during their past political battles and many of them remained in jail.

"It's the culmination rather than the start of this process, which seemed to have begun late last year in the aftermath of the big flood. Each side has to yield somewhat and give up the non-essential parts of their interests," he said.

However, the academic said the Yingluck-Prem meeting would turn out to be a raw deal for victims of political violence.

"It's sad to say, but it may be the only feasible political deal at the moment, given the present balance of political forces," Mr Kasian said.

Puangthong Rungswasdisab, a political scientist at Chulalongkorn University, said Ms Yingluck was compelled to walk the reconciliation path with Gen Prem because of Thaksin's need to return home.

She said Thaksin himself wanted to come back so much as he said in earlier interviews that he was willing to propose an amnesty law that would absolve state authorities involved in the deadly April and May 2010 crackdowns. That would include absolving former prime minister Abhisit Vejjajiva and deputy prime minister Suthep Thaugsuban.

"If such an amnesty-based reconciliation law is enacted, I believe the Pheu Thai Party will split. If it's not broken altogether, it will lose a large support base especially from the red shirts. A blanket amnesty law is a direct affront to what the red shirts have been fighting for, namely justice for the dead."

You can read the full story here: http://bit.ly/JHSULf

courtesy call – a formal or official visit, usually by one important person to another, just to be polite, not to discuss important business
Privy Council – the group of appointed advisors to the King of Thailand   สภาองคมนตรีไทย
deputy – a person whose rank is immediately below that of the leader of an organisation รอง
ceremony – a formal public event งานพิธี
blessing – God's help and protection, or a prayer asking for this การสวดให้พร, การให้พร
ire – anger ความกริ้วโกรธ, ความโมโห
analyst – a person whose job involves examining facts or materials in order to give an opinion on them  นักวิเคราะห์
symbolic – representing something important, but not the real thing เป็นสัญญาณ เป็นสัญลักษณ์
reconciliation – the process of creating a new and friendly relationship again with someone you argued with or fought with การปรองดอง
residence – a place where someone lives บ้านพัก
traditional – of a custom, a way of life or a way of doing things that has not changed for a long time เป็นประเพณี,  ตามธรรมเนียม
last – to continue for a particular length of time กินเวลา
chagrin – a feeling of being very annoyed, disappointed or embarrassed ความคับแค้นใจ
party-list – a system that gives each party in an election a number of seats in relation to the number of votes its candidates receive ระบบสัดส่วน, ระบบปาร์ตี้ลิสต์
nurse – someone who is trained to look after ill or injured people, usually in a hospital พยาบาล
crackdown – strong action that someone in authority takes to stop a particular activity การใช้กำลังสลายผู้ประท้วง
protest – a meeting or rally, sometimes forceful or violent, of people who strongly disagree with something ชุมนุมประท้วง
intersection – a place where roads, lines, etc., join or cross each other สี่แยก
criticism – comments that show that you think something is wrong or bad การวิจารณ์
rally – a large public gathering of people to support someone or to protest against something การชุมนุม
cohort – a member of a group of people who support another person  เพื่อนร่วมงาน, ผู้ติดตาม
severely – very seriously อย่างรุนแรง
disappointed – unhappy because someone or something was not as good as you hoped or expected, or because something did not happen ผิดหวัง
faculty – a group of departments in a college which specialize in a particular subject or group of subjects คณะ
rival – a person, team or business that competes with another คู่แข่ง
culmination – the final result of a process or situation ผลสุดท้าย
process – a series of actions that you take in order to achieve a result แนวทางปฏิบัติ, กระบวน, วิธีการ
aftermath – the effects and results of something bad or important ผลที่ตามมา
yield – to give up the control of or responsibility for something, often because you have been forced to ยอมให้
essential – necessary ที่จำเป็น
interest – an advantage or benefit to someone or something ผลประโยชน์
academic – someone who teaches at a college, or who studies as part of their job นักวิชาการ
raw deal – an unfair agreement ข้อตกลงที่ไม่เป็นธรรม
victims – people who are killed injured or harmed in some way from an accident, natural disaster, crime, etc. เหยื่อผู้เคราะห์ร้าย
violence – physical force with the deliberate intention of causing damage to property or injury or death to people ความรุนแรง
feasible – that is possible and likely to be achieved ซึ่งเป็นไปได้
balance – a stable condition/relationship between two sides  ความสมดุล, การทรงตัว
compelled – forced to do something ถูกบังคับ
interview – a meeting (often a public one) at which a journalist asks somebody questions in order to find out their opinions, experiences, etc. การสัมภาษณ์
propose – to suggest an idea for a group to consider เสนอ
amnesty – a situation in which a government agrees not to punish people who have committed a crime การนิรโทษกรรม
absolve – to state formally that somebody is not guilty or responsible for something  ปลดเปลื้อง, อภัยโทษ
state – government รัฐบาล
authorities – people who have the power to make decisions or enforce the law เจ้าหน้าที่ผู้มีอำนาจ
enact –to pass into law ออกกฎหมาย
split – to divide  ทำให้แตกแยก
blanket – affecting or aimed at everyone or everything equally, even when this is not sensible or fair ครอบคลุม, กว้าง
affront – a remark or an action that insults or offends somebody/something   การดูถูก, การดูหมิ่น, การสบประมาท
namely – specifically; used to introduce more exact and detailed information about something that you have just mentioned กล่าวคือ
justice – a fair result or punishment from a court of law ความยุติธรรม