The neighbourhood pawnshop, where residents can get loans in exchange for valuables, is still doing a very good business in Bangkok. 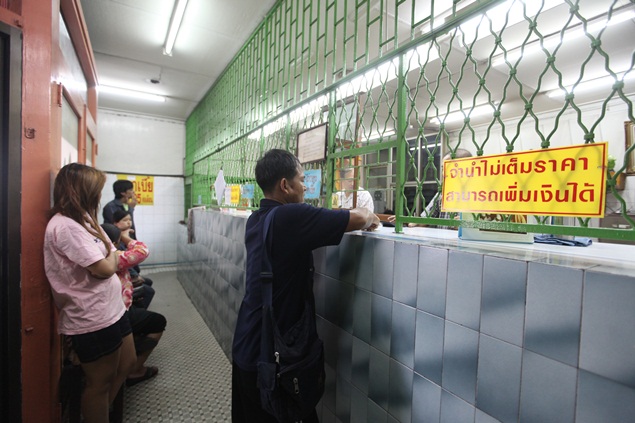 Customers wait their turn at a pawn shop in the Klong Toey area. Many pawn shops have reported an increase in customers as living costs increase. PAWAT LAOPAISARNTAKSIN

For many, pawn pays the bills

Rising costs are forcing some to trade in their valuables

The rapid rise in credit card use, hire-purchase and personal loans has played a key role in the growth of consumerism across the country.

But some eschew the modern siren call of "buy now, pay later" in favour of an older source of credit – their neighbourhood pawn shop.

For nearly three decades, pawn shops operated by the city have served residents seeking emergency funds or a convenient place to shed their old goods.

Boonsong Fugthim, manager of a pawn shop in Klong Toey, says gold is the most common asset brought in.

Business over the past week has risen by about 10% from normal, he said, with two to three baht-weight in gold ornaments pledged each day.

"Many customers walk in and complain that food and everything else is more expensive. But what can you do about it?" Mr Boonsong asked.

One 23-year-old student from Si Sa Ket was waiting patiently at the counter to reclaim a gold necklace she pawned in February to help cover tuition expenses for her undergraduate course.

Another customer, Tik, who works as an administration official at a private school, said: "Since the beginning of the year, I really feel that everything is more expensive.

"Before, 200 or 300 baht might have been enough for food to last me the entire week. Now, I might spend that much in just one or two days.

"My apartment recently raised rent to 5,300 baht per month from 4,900 baht, and electricity prices are rising as well.

"When I asked the landlord why he was raising rent, he only said that everything is more expensive now."

Tik said her employer has already promised to raise her salary to 12,000 baht per month from 8,800 baht in the near future.

"But I don't think it will help cover the increases in living expenses. I really feel that the economy was better before."

Nearby, Sujitra, a 51-year-old housewife, nodded her head in agreement, and expressed sorrow about how life has changed from the past.

"Every three days I have to spend 500 baht for milk for my one-year-old nephew," she said. "Nappies cost more still."

"Nowadays you need money for everything, not like in the past when you could grow fruits and vegetables for free."

It seems nearly everyone has a complaint about food prices.

"Last year, you could buy cooking oil for 29 baht per bottle. Now it's 50 baht – and that's only if you can actually find any for sale," 71-year-old Suwanee Klongpopsuk said.

A pawn shop regular, she visited the Klong Toey store to reclaim three baht-weight of gold that she pledged two years ago, which she plans to sell elsewhere to help finance her grandchildren's university studies.

"I like pawn shops. The interest rates are low and the payment terms are quite flexible," Mrs Suwanee said.

Like everyone else in the store, she said prices have jumped in recent months, particularly for food.

"I'd like to tell the government that letting prices to rise so fast isn't good."

turn – the time when somebody in a group of people should or is allowed to do something โอกาส
pawn shop – a business that lends money in exchange for items left with them. If the money is not paid back by a particular time, the pawnbroker can sell the item โรงรับจำนำ
trade – to exchange something that you have for something else แลกเปลี่ยน
valuables – small possessions that are worth a lot of money, for example jewellery ของล้ำค่า
credit – an arrangement that you make, with a shop/store for example, to pay later for something you buy การซื้อเชื่อ
hire-purchase – a method of buying expensive goods in which you pay small regular amounts of money until you have paid the whole amount. The American word is installment plan การเช่าซื้อ
loan – an amount of money that a person, business, or country borrows, especially from a bank เงินกู้
key – very important ที่สำคัญ
role – the purpose or influence of someone or something in a particular situation บทบาท
consumer – someone who buys and uses goods and services ผู้บริโภค
consumerism – the practice buying things, especially more and more of them
eschew – to deliberately avoid or keep away from something หลบเลี่ยง
siren call – the temptation/desire to do something that seems very attractive but that may have bad results
in favour of – preferring to choose someone or something that you believe is better
source – the place/person/organisation from which you get something แหล่ง
neighbourhood – a particular area of a city or town ละแวก, ย่าน
decade – a period of ten years  ทศวรรษ
operate – to carry out an activity like running a business ดำเนินการ
residents – people who live in a particular area ประชาชนที่อาศัยในท้องที่
emergency – an unexpected situation in which immediate action is necessary เหตุฉุกเฉิน
funds – money needed or available to spend on something เงินทุน
convenient – easy to do, or not causing problems or difficulties สะดวก
shed – to get rid of something that is no longer wanted  ทิ้ง
goods – things that are produced to be sold; possessions that can be moved สินค้า, สิ่งของ
reflect – to show สะท้อน แสดงถึง
school term – one of the periods of time into which the year is divided for students ภาคเรียน
asset – a thing of value สิ่งที่มีคุณค่า
normal – typical, usual or ordinary; what you would expect ภาวะปกติ
ornament – a small attractive object used for decoration เครื่องประดับประดา
pledge – to leave a sum of money or something valuable with somebody to prove that you will do something or pay back money that you owe วางมัดจำ
patient – able to wait for a long time without becoming angry or upset  อดทน
reclaim – to take back something that was yours เรียกกลับคืน, เอากลับ
necklace – a piece of jewellery consisting of a chain, string of beads, etc. worn around the neck สร้อยคอ
tuition expenses (fees) – money paid to attend classes ค่าเล่าเรียน
undergraduate – of a student who is studying for a first degree at a college or university เกี่ยวกับนักศึกษาปริญญาตรี
entire – including everything, everyone or every part ทั้งหมด
rent – paying money for the use of something for a period of time  ค่าเช่า
landlord – a person or organisation that owns a building or an area of land and is paid by other people for the use of it เจ้าของที่ดิน
employer – a person, company, or organisation that pays someone to work for them as a member of their staff นายจ้าง
salary – a fixed amount of money that you earn each month or year from your job เงินเดือน
nod – to move the head down and up to show agreement, approval or greeting ผงกศรีษะรับ, แสดงอาการรับรู้
sorrow – great sadness ความโศกสลด ความเศร้าโศก
nephew – a son of your brother or sister, or a son of your husband’s or wife’s brother or sister หลานชาย
nappies – a piece of soft cloth or other thick material that is folded around a baby's bottom and between its legs to absorb and hold its body waste
upcountry – areas outside of the Bangkok area; connected with an area of a country that is not near large towns ต่างจังหวัด, ที่อยู่ในชนบท, ที่อยู่ห่างไกลจากเมือง
complaint – when someone says that something is wrong or not satisfactory การบ่น, ข้อที่ไม่พอใจ
regular – normal; following a pattern, especially with the same time and space in between each thing and the next ปกติ
finance – to provide money for something จัดหาเงินทุนให้
interest rate – the percentage that a bank or other financial company charges you when you borrow money, or the percentage it pays you when you keep money in an account  อัตราดอกเบี้ย
terms – conditions; requirements  ข้อกำหนด
flexible – able to change to suit new conditions or situations เปลี่ยนแปลงได้,แก้ได้
particularly – especially, or more than usual โดยเฉพาะ