The BMA has come under heavy criticism from the government which accused it of being too slow to drain water from streets and roads following heavy rain on Tuesday afternoon. 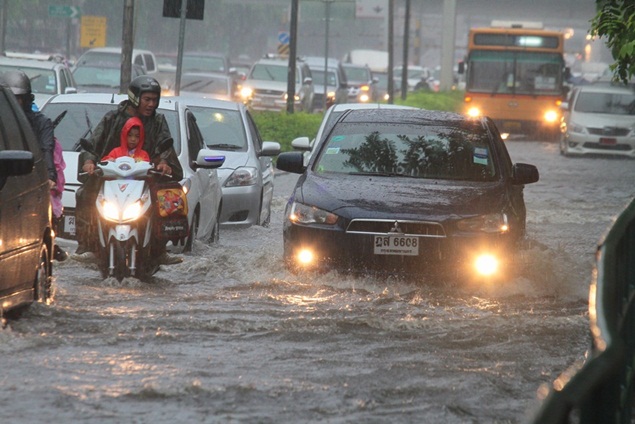 Floodwater in Bangkok is staying on city roads much too long says the government, blaming City Hall for inaction. APICHIT JINAKUL

Govt says BMA too slow to act in draining water 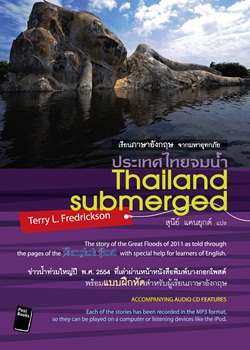 City Hall has come under heavy criticism from the government which accused it of being too slow to drain water from streets and roads following heavy rain on Tuesday afternoon.

Many Bangkokians were left frustrated in heavy traffic congestion following the downpour which placed several low-lying areas under water.

"I don't want to criticise City Hall," said Royol Chitradol, flood monitoring panel chairman under the state-appointed Water and Flood Management Commission. "But we have told it [to improve the flood drainage facilities]. It did nothing, claiming the job in some areas belonged to the Highways Department."

Mr Royol said drainage flaws could be found in sewers which were too small in front of the Army Club on Vibhavadi Rangsit Road and clogged drains at Sutthisan intersection which were hit hardest following Tuesday's rain.

The Bangkok Metropolitan Administration (BMA) had boasted about giant underground tunnels it had built as storm drains, but water hardly flowed into them because the capital's landscape was mostly flat, he said.

He suggested City Hall use water-pushing machines in canals to help speed up drainage.

Prime Minister Yingluck Shinawatra said the slow drainage might be caused by problems including garbage in sewers, clogged canals and the possibility that the underground tunnels might not work to their full capacity.

"We don't know their actual capacities because sometimes floodwater may not flow [into the tunnels]," she said.

Bangkok has seven drainage tunnels with diameters ranging from more than 3 metres to over 5m. The tunnels, built as the "expressway" for floodwaters in major city venues, were designed to drain 155.5 cubic metres of water per second.

To help improve the drainage in Bangkok, the prime minister said she had ordered the Corrections Department to mobilise prisoners to clear clogged sewers.

Department chief Suchart Wong-anantchai said he is preparing to recruit 2,000 inmates, with good behaviour, to carry out the cleaning.

Bangkok deputy governor Wallop Suwandee said up to 29 areas in the capital were flooded on Tuesday.

He argued, however, that most of the water had been drained from the roads in a few hours. But city officials admitted that there were still some flaws in Bangkok's drainage system.

They said although the water had been drained from city canals earlier to make room for floodwater, the heavy rainfall rapidly filled them, hampering the drainage of water.

They also said heavy rain now posed more of a flood threat to the city than run-off from the North.

This month's rainfall has been measured at 800 millimetres, half of which took place over the past four days, deputy Bangkok governor Teerachon Manomaiphibul said.

"The rain volume is now more than 100mm every day," he said.

You can read the full story here: http://bit.ly/SCM9Za

City Hall – a city government, in this case, the Bangkok city government  กรุงเทพมหานคร
inaction – lack of action ความเฉื่อยชา, ความเกียจคร้าน
blast – to criticise severely วิพากษ์วิจารณ์อย่างรุนแรง
Bangkok Metropolitan Administration (BMA) – the local government of Bangkok กรุงเทพมหานคร
act – to take action; to do something for a particular purpose or in order to deal with a situation  จัดการ, ดำเนินการ, ปฏิบัติ
criticism – comments that show that you think something is wrong or bad การวิจารณ์
drain – to cause water or fluid to flow out ระบายออก
frustrated – feeling annoyed and impatient because you are prevented from achieving something ผิดหวัง,ท้อแท้ใจมาก, หงุดหงิดใจ
congestion – a situation in which a place is crowded with people or vehicles แน่นขนัดไปด้วยรถหรือคน
downpour – a lot of rain in a short time ฝนตกหนักมาก, พายุฝน
panel – a group of people who make decisions or judgments คณะกรรมการ
state – government รัฐบาล
appoint – to choose someone officially for a job or responsibility แต่งตั้ง,ตั้งให้เป็น
commission – an official group of people who have been given responsibility to control something, or to find out about something, usually for the government  คณะกรรมการ, คณะกรรมาธิการ
improve – to make better  ทำให้ดีขึ้น
facilities – the buildings, equipment and services provided for a particular purpose อุปกรณ์, อุปกรณ์อำนวยความสะดวก, สิ่งอำนวยความสะดวก
claim – to say that something is true although it has not been proved and other people may not believe it อ้าง
flaw – something wrong with something ข้อบกพร่อง
sewer – an underground pipe or passage that carries sewage (liquid waste) ท่อน้ำเสีย, ท่อระบายน้ำ
clogged – blocked, so that nothing can get through ตัน
intersection – a place where roads, lines, etc., join or cross each other สี่แยก
boast – to proudly tell other people what you can do or have done คุยโว, โว, โม้, โอ้อวด
tunnel – an underground passage อุโมงค์
flow – (of a liquid) to move continuously in one direction ไหล
landscape –  the appearance and characteristics of an area of land ภูมิประเทศ,  ภูมิทัศน์
capacity – the amount of something that can be produced or done  ความสามารถในการ (ระบาย, ผลิต etc.)
actual – real; existing in fact จริง
diameter – the length of a straight line that crosses a circle through the centre เส้นผ่านศูนย์กลาง
range – to have an upper and a lower limit in amount, number, etc ผันแปรภายในขอบเขตหนึ่ง
venues – places were public events or meetings take place สถานที่ชุมนุม พบปะสังสรรค์
Corrections Department – the government department in charge of running prisons กรมราชทัณฑ์
mobilise – to organise a group of people to do something ระดมกำลัง
prisoner – a person who is kept in prison as a punishment, or while they are waiting for trial นักโทษ
recruit – to persuade someone to join in something จัดหาคน
inmate – someone who is kept in a prison, mental hospital or other institution ผู้ถูกกักกัน, ผู้ถูกกักบริเวณในเรือนจำหรือโรงพยาบาล
behaviour – the way that someone acts or behaves พฤติกรรม, การกระทำตัว
deputy – a person whose rank is immediately below that of the leader of an organisation รอง
argue – to give reasons why you think that something is right/wrong, true/not true, etc, especially to persuade people that you are right ห้เหตุผล, อ้างเหตุผล
admit – to agree that something is true, especially when you are unhappy, sorry or surprised about it  ยอมรับ
hamper – to stop someone or something from making progress or developing; to hinder ขัดขวาง, เป็นอุปสรรค
pose a threat – to be a possible danger กระทำการซึ่งอาจก่อให้เกิดอันตรายต่อ
run-off – rain, water or other liquid that runs off land into streams and rivers น้ำหลาก
volume – an amount of something ปริมาณ
disaster – an unexpected event, such as a very bad accident, a flood or a fire, that kills a lot of people or causes a lot of damage ภัยพิบัติ ความหายนะ
predict – to say that an event or action will happen in the future, especially as a result of knowledge or experience คาดการณ์ว่า พยากรณ์จากสถิติว่า