Thailand has ranked 3rd in world for Johnny Walker sales for 3 years, behind only much larger US & Brazil. Thailand is No.1 Asean market. 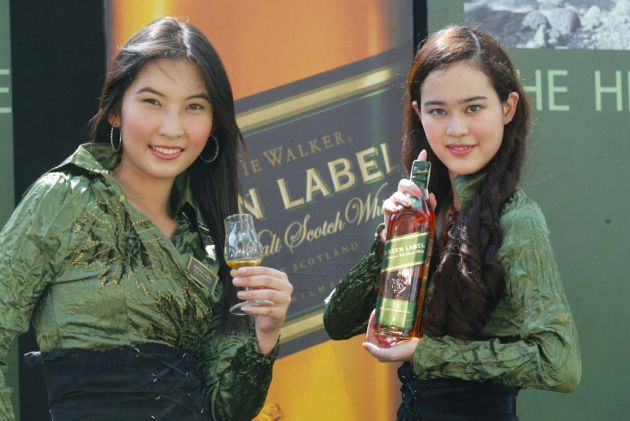 Thailand is ranked third among 180 markets for Johnnie Walker whisky sales for the third consecutive year thanks to growing numbers of middle-class customers and rising economic prosperity.

The consumption of Johnnie Walker in this country is high, behind only the US and Brazil.

Still, Thailand has been dubbed a whiskey-consuming country, while the US is seen as a big vodka consumer

Some 90% of the international spirits business is whisky.

"Thailand is the strongest market for Johnnie Walker in Asean. More than half the sales contribution in Asia-Pacific comes from Thailand," said Graeme Harlow, the managing director of Diageo Moet Hennessy (Thailand) Ltd.

Diageo now commands a 59% share of Thailand's imported spirits market, its biggest ever.

Mr Harlow said Thailand's luxury market has expanded by 41% over the past five years.

Double-digit growth of luxury products in Thailand will be seen this year and well into the future.

...Asia-Pacific sales of Johnnie Walker now contribute about 12% of the global total and will climb to 20% by 2015.

Johnnie Walker - "a brand of Scotch Whisky owned by Diageo and originated in Kilmarnock, Ayrshire, Scotland. It is the most widely distributed brand of blended Scotch whisky in the world, sold in almost every country with yearly sales of over 130 million bottles. In 2011, the brand sold over 1 million cases in the USA, Brazil and Thailand. It sold more than 500,000 cases in Mexico and Australia" (See Wikipedia)

Diageo - a UK alcoholic beverages company, "the world's largest producer of spirits and a major producer of beer and wine" (See Wikipedia)

spirits - alcohol; a distilled beverage; a strong alcoholic drinks such as whisky or brandy (See Wikipedia)
distil (verb) - to make alcohol by heating a liquid until it becomes a gas and then cooling it until it becomes a liquid again (See Wikipedia)
distillation (noun)
distilled beverage - an alcoholic drink made by distilling a liquid; a beverage produced by distilling fermented grain, fruit, or vegetables (See Wikipedia)
ferment (verb)- when the sugar in a liquid or food turns to an alcohol
ethanol fermentation (noun) -  "a biological process in which sugars such as glucose, fructose, and sucrose are converted into cellular energy and thereby produce ethanol and carbon dioxide as metabolic waste products. Because yeasts perform this conversion in the absence of oxygen, ethanol fermentation is classified as anaerobic. Ethanol fermentation occurs in the production of alcoholic beverages and ethanol fuel, and in the rising of bread dough" (See Wikipedia)

brand - a type of product or group of products sold using a particular name, which is often the name of the company that produces them; the name that is given to the products (See Wikipedia)

awareness - the state of knowing about something การรับรู้, การทราบ
brand awareness - when many people know about a brand of product that a company produces (See Wikipedia)

official - when the government (or someone with power and authority) says something (makes an announcement)
It's official ...

ranked - to a person or thing into a position in order of success, importance, size, etc

consecutive - following one after another in order ติดต่อกัน ที่ต่อเนื่องตามลำดับ
thanks to - (something good happened) because of ...

middle-class - people with incomes in the middle, not rich or poor (See Wikipedia)

consumption - using, eating or drinking something การบริโภค
consumer - someone who buys and uses goods and services ผู้บริโภค

international -  including all countries, between different countries ระหว่างประเทศ, นานาชาติ
the international spirits business is whisky

contribution - something that you do that helps to achieve something or to make it successful ผลงาน,การช่วยเหลือ
half the sales contribution in Asia-Pacific comes from Thailand

contribute - add to something
global - throughout the world ทั่วโลก