Attacked & beaten outside his condominium, suffering a skull fracture & brain injury, he can only communicate by eye movement. 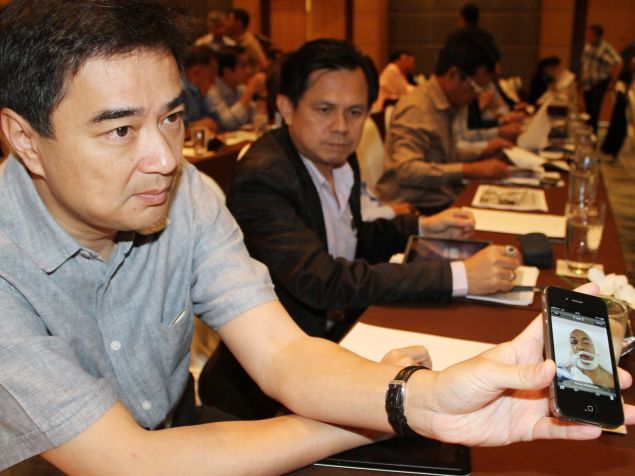 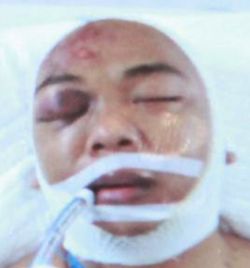 Mr Ramet, a legal adviser to the major opposition party, suffered a skull fracture and severe concussion when he was attacked outside his condominium in Bangkok's Bang Na district on Monday night.

Mr Abhisit said he had been informed that Mr Ramet is now safe and is no longer on a ventilator. He could communicate by eye movement, but could not talk at this time.

His condition was serious, but fortunately there was no blood clot on the brain.

The opposition leader called on the government and the national police chief (Pol Gen Adul Saengsingkaew) to quickly investigate and clarify the incident.

Mr Ramet had recently been assigned to talk about political issues (to the media) and this assault is a sign of a threat.

"Mr Ramet told me once before that he was being followed," the former premier said.

The deputy spokesman was working in many cases, including the case of East Water Group's flood relief donations through the Democrat Party.

Mr Ramet's absence would affect the Democrat's work considerably since he had been considered the main pillar of the party and had been coordinating with many people, Mr Abhisit added.


Political Violence Vocabulary
political violence - the use of violence by people and governments to achieve political goals (See Wikipedia) violence - doing things to cause harm, injury and death to people and damage to property ความรุนแรง

deputy - a person who is given the power to do something instead of another person, or the person whose rank is immediately below that of the leader of an organisation รอง, ตัวแทน,ผู้รักษาการแทน deputy spokesperson

assault - a violent physical attack on a person;  the crime of physical violence against another person ทำร้าย การทำร้ายร่างกาย (See Wikipedia)
the assault on Democrat deputy spokesman Ramet Ratanachaweng was politically motivated

adviser – a person who gives advice, especially somebody who knows a lot about a particular subject ที่ปรึกษา
a legal adviser

suffered a skull fracture and severe concussion when he was attacked

inform - to tell somebody about something, especially in an official way แจ้งให้ทราบ
informed - was told about something
ventilator - a machine that helps a person breath (when they are sick or injured)
no longer on a ventilator

movement  - changing the position or place where something is การเคลื่อนไหว, การเคลื่อนที่
eye movement

blood clot - when blood turns solid and can block blood flow ลิ่มเลือด
his condition was serious, but fortunately there was no blood clot on the brain.

clarify - to make something moer clear; explain more clearly and make it easier to understand แจกแจง ชี้แจง ทำให้ชัดแจ้ง ชี้แจงเหตุผล
incident - an unpleasant event
called on the police chief to quickly investigate and clarify the incident.

media - radio, television, newspaper, the Internet, considered as a group สื่อ
assigned to talk about political issues (to the media)

threat - 1. a danger อันตราย; 2. saying that you might do something bad or harmful, especially in order to make someone do something การขู่เข็ญ การคุกคาม ทำให้กลัว
this assault is a sign of a threat.

relief - money, food, medicine etc. that is given to help people in places where there has been a natural disaster, war, etc. เครื่องบรรเทาสาธารณภัย donations - money given by people to help some project or organisation financially
flood relief donations

absence - not being present; a period of time when a person is not present at work, at school การหายไป ไม่ปรากฏตัว ช่วงการขาดงาน considerably
Mr Ramet's absence would affect the Democrat's work considerably

pillar - a very important member or part of a group, organization, system, etc แกนนำสำคัญ
coordinating - working together efficiently
he had been considered the main pillar of the party and had been coordinating with many people