Red water lilies spread out over the water of this lake famous for an ancient love story with a sad ending. A must visit destination selected by local people in Udonthani. 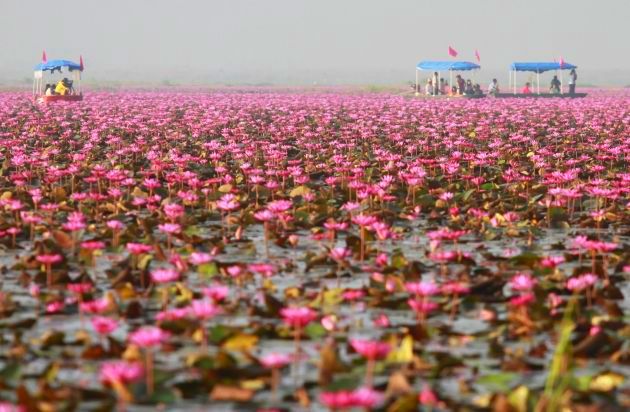 
Off the beaten track

Earlier this year the Tourism Authority of Thailand announced the 'Miracle Year of Amazing Thailand' campaign under which all 77 provinces in the country were invited to list attractions and experiences unique to them and not found elsewhere. Listed here are the best tourism products from some provinces selected by local people - nature spots, as well as cultural spots.

Lake Nong Harn occupies 20,000 rai and is a significant source of water for the Nam Pao River, the lifeline of the province.

Starting in October the water lilies, long dormant, spring back to life sprouting new shoots that in due course become leaves and flowers. By December the entire lake is a vast patchwork of vivid red colours of stunning beauty and a playground for the folks who live in the vicinity. The flowers are in bloom from dawn until noon. The flowering season runs until March.

water lily - the lotus flower, a flower that is an important symbol in Buddhism ดอกบัว (See Wikipedia)
the lake of red water lilies

Nong Han Kumphawapi Lake - the lake discussed in article, a famous lake in Isan near Udonthani: the lake is very shallow, mostly not exceeding a depth of 1 meter. The open water area of 1.7 km² is surrounded by a wetland covering 4.1 km², including paddy fields", also the scene of a famous folk story, the story of Phadaeng & Nang Ai (See Wikipedia)

folk tale of Phadaeng & Nang Ai -  "Nang Ai was the beautiful daughter of King Kom who ruled the country of Chathida. Many wanted to marry her. Amongs those men was Prince Phadaeng, a man from another land, and Prince Pangkhii, who had wed Nang Ai in former lives but in this one was the son of Phaya Nak, the Grand Nāga who rules the Deeps. So many suitors desired to wed Nang Ai that her father staged a Rocket Festival competition, the winner to enjoy a royal wedding. But hopes were dashed when only rockets of her uncles make it aloft, and her father called the whole thing off. Naga Prince Pangkhii changed into a white squirrel to spy on Nang Ai but she saw him and had him killed by a royal hunter. Pangkhii's flesh magically transformed into 8,000 cartloads of meat. Nang Ai and many of her countrymen ate of this tainted flesh, and Phaya Nak vowed to allow no one to remain living who had eaten of the flesh of his son. Aroused from the Deeps, he and his watery myrmidons rise and turn the land into a vast swamp — of which this very Nong Han is a remnant" (See Wikipedia)

local - in or related to the area that you live, or to the particular area that you are talking about ท้องถิ่น
local people - people who live in a local area

historical spot - places that are interesting to visit because of history (example: an important battle was once fought at this historical spot)

Listed here are the best tourism products from some provinces selected by local people - nature spots, as well as cultural spots.

in full bloom - the flowers on the plant are fully open (completely open, cannot open anymore)
water lilies in the lake are in full bloom

recreation (noun) - something you do outside of work to relax and enjoy yourself (such as play golf or go shopping) สันทนาการ, นันทนาการ, การละเล่น, การพักผ่อน, การหยุดทำงานชั่วคราวให้คลายเหนื่อย
recreational (adjective)

significant - important สำคัญ
source - the place or person something comes from or starts at, or the cause of something ต้นกำเนิด, แหล่งกำเนิด
a significant source of water for the Nam Pao River

Lake Nong Harn occupies 20,000 rai and is a significant source of water for the Nam Pao River, the lifeline of the province
dormant - inactive, resting, not moving, active or growing ซึ่งหยุดการเจริญเติบโตชั่วคราว,  ซึ่งหยุดกิจกรรมชั่วคราว long dormant - has been dormant for a long time

spring - jump suddenly, leap  กระโดด, ดีดตัว spring back to life - suddenly come back to life
sprout (verb) - when a leaf or other part begins to grow on a plant (bud)  แตกหน่อ,  ออกหน่อ

Starting in October the water lilies, long dormant, spring back to life sprouting new shoots that in due course become leaves and flowers.

vicinity - an area near a particular place บริเวณใกล้เคียง
the lake is a playground for the folks who live in the vicinity.

dawn - early in the morning (when the sun first appears)
the flowers are in bloom from dawn until noon.

Man wanted for murder in Russia arrested in Pattaya