MR Sukhumbhand Paribatra will resign as Bangkok governor today and quickly begin his campaign for re-election. 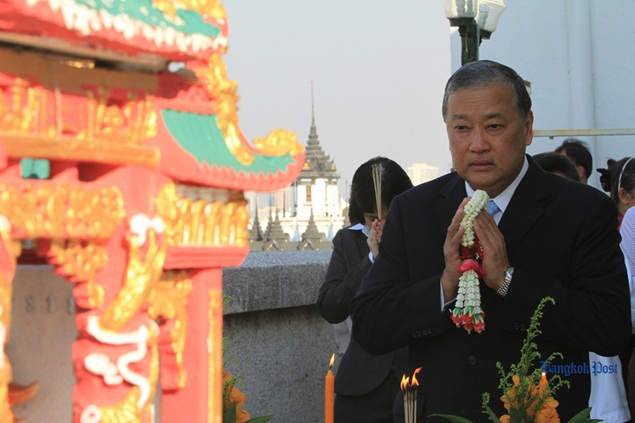 Bangkok governor Sukhumbhand Paribatra performs a religious rite yesterday before announcing his resignation in order to contest the race for the capital’s next governor. APICHART JINAKUL

MR Sukhumbhand's term was supposed to end tomorrow on Jan 10, which would have required that a city election be held by Feb 17.

But by resigning a day early, the incumbent governor, who is running for re-election, has added an extra 15 days to the campaign.

Under the Bangkok Metropolitan Administration (BMA) Act, if the incumbent governor serves out his term the election must be held within 45 days, but in the case of an early resignation the deadline is extended to 60 days.

This means the election must now be held by March 3 instead.

The governor said yesterday he had decided to resign early so the Election Commission (EC) can fully prepare for the poll, even though the 60-day timeframe would be long enough to give rival candidates an advantage.

The governor said he will submit his resignation today to city clerk Ninnat Chalitanont, who will forward it to the Interior Ministry.

MR Sukhumbhand said he will also today report to the Department of Special Investigation (DSI) to hear charges over the skytrain extension contract before submitting his resignation letter.

He said the DSI had only begun an initial investigation into the case without any witnesses being called in for questioning yet.

BMA spokesman, Wasant Meewong, said after receiving the resignation, the city clerk will notify the EC, which will then call an election to select a new Bangkok governor within 60 days.

The city clerk will temporarily be in charge of city administration until the new governor is endorsed, he said.

MR Sukhumbhand's Democrat Party yesterday held a meeting to map out strategies and draw up policy platforms for his re-election campaign. 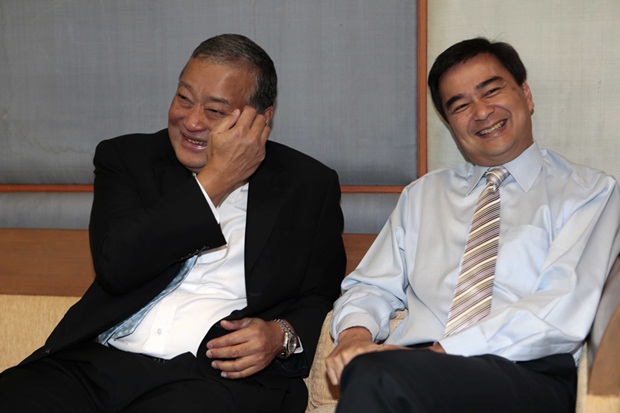 Pheu Thai Party spokesman Jirayu Huangsap said yesterday that ex-premier Thaksin Shinawatra commented on the party's choice of candidates for the Bangkok governor election via Skype at a party seminar over the weekend.

Mr Jirayu said the party's de facto leader believes Pol Gen Pongsapat Pongcharoen, deputy national police chief and secretary-general of the Office of the Narcotics Control Board, has what it takes to be governor.

Thaksin thinks former veteran politician Khunying Sudarat Keyuraphan, an alternative candidate, should be saved for a job at the national level.

Pheu Thai secretary-general Phumtham Wechayachai said at a press conference yesterday the party had already reached a decision on its nominee.

He said the party will field only one candidate, but declined to reveal who the nominee is. The candidate will be unveiled next Tuesday, he said.

rite – a traditional ceremony, especially a religious one พิธีกรรม (พระราชพิธี)
resignation – the act of leaving a job, position of power, etc. การลาออกจากตำแหน่ง
contest – to take part in an election or other competition ลงแข่ง, ลงรับเลือกตั้ง
notice – information or a warning given in advance of something that is going to happen การแจ้งล่วงหน้า
campaign – to take part in a planned series of activities (a campaign) designed to persuade voters to vote for a particular candidate or political party รณรงค์หาเสียง
take effect – to begin to be used or required ส่งผล
term – a period of time a politician, government or other official holds their job ช่วงเวลาการดำรงตำแหน่งหรืออำนาจ
incumbent – a person who holds an official position at the present time ผู้ดำรงตำแหน่ง
Bangkok Metropolitan Administration (BMA) – the local government of Bangkok กรุงเทพมหานคร
Act – a law passed by a country’s government พ.ร.บ. พระราชบัญญัติ
serve out a term – to finish a full term
deadline – a time or day by which something must be done เส้นตาย
extend – to add more time ยืดออกไป
Election Commission – the independent government agency that oversees elections คณะกรรมการเลือกตั้ง
poll – an election การเลือกตั้ง
timeframe – the length of time something is supposed to last ในกรอบเวลาที่ระบุำไว้
rival – a person you are competing against or opposing คู่แข่ง
candidate – a person who is trying to be elected ผู้สมัครรับเลือกตั้ง
advantage – a condition giving a greater chance of success ความได้เปรียบ
submit – to formally give something to someone so that can make a decision about it ยื่น (เอกสาร) เพื่อการพิจารณา
(DSI) Department of Special Investigation – a police department investigating serious crimes involving influential people, organised crime, or crimes using highly sophisticated technology กรมสอบสวนคดีพิเศษ
charge – an official statement accusing someone of committing a crime ข้อกล่าวหา
initial – happening at the beginning of a process ในเบื้องต้น
witness – someone who tells a court or investigators what they know about a crime พยาน
city clerk – a city official who keeps local records and gives out licences ปลัดเทศบาล
notify – to tell someone officially about something แจ้ง
temporarily – for a limited period of time ชั่วคราว
in charge of – to be in a position of having control over somebody/something; having responsibility for somebody/something ดูแล, รับผิดชอบ
administration – government รัฐบาล
endorsed – officially approved รับรอง
map out – to plan something in detail วางแผน
strategy – a plan or method for achieving something, especially over a long period of time ยุทธวิธี, แผนการ
policy – a set of plans or action agreed on by a government, political party, business, or other group นโยบาย
platform; manifesto – the aims of a political party and the things they say they will do if they win an election นโยบาย
outgoing – leaving the position of responsibility mentioned ที่พ้นจากงานหรือความรับผิดชอบ
oversee – to watch or organise a job or an activity to make certain that it is being done correctly คุมงาน,ควบคุม
overall – total; including all the things or people that are involved in a particular situation; general  ทั้งหมด
deputy – a person whose rank is immediately below that of the leader of an organisation รอง
via – through  ผ่าน
seminar – a meeting for discussion or training การสัมมนา
narcotics – illegal drugs such as heroin, cocaine or crystal methamphetamine  ยาเสพย์ติด
veteran – someone who has a lot of experience doing a particular activity อาวุโส
alternative – another choice ตัวเลือก / ทางเลือก
level – a position or rank in a scale of size or importance ระดับ
press conference – an official meeting where someone makes a formal statement about a particular issue or event to journalists and answers their questions about it การแถลงข่าว
nominee – someone who has been formally proposed for a job ผู้ได้รับการเสนอชื่อ
field – to provide a candidate to represent you in an election ส่งคนลงสมัคร
decline – to say politely that you will not accept something or do something ปฏิเสธ
reveal – to let something become known เปิดเผย
unveil – to announce something that was not known before เปิดเผยข้อมูล