An excerpt from a long interview with political cartoonist Chai Rachawat who is being sued by the prime minister for a Facebook comment calling her an evil woman.

Here is an excerpt from a long interview with political cartoonist Chai Rachawat who is being sued by the prime minister for a Facebook comment calling her an evil woman. You can read the full interview here: http://www.bangkokpost.com/lifestyle/interview/350646/chai-draws-a-fine-line 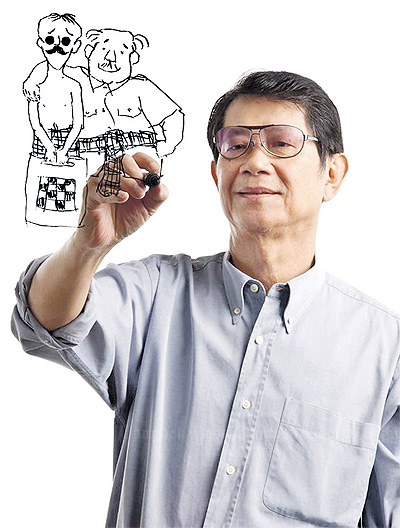 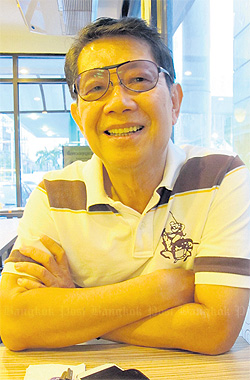 The leading cartoonist appears relaxed although he has found himself in hot water over his ‘evil woman’ remark posted on his Facebook page. NAUVARAT SUKSAMRAN

Many people who criticise the prime minister haven't been sued. Why Chai Rachawat, of all people?

Firstly, many people read my posts. I do not often post messages on Facebook. I do it once in a while when something touches me. Secondly, my remarks satisfy people, so they are shared [online] by a lot of people. Normally my posts receive a few hundred "likes" but this time, tens of thousands shared it.

The prime minister's speech overseas touched a raw nerve with many. They feel that the facts about democracy in Thailand were distorted with the intention of whitewashing the brother and his family. People cannot accept this. When my remark was posted, it struck a chord with a lot of people and was shared quite extensively. So some people were caught off guard and decided they should do something to shut me up.

With the "evil woman" statement, what were you trying to tell people?

It was to imply that the prime minister's speech was tantamount to selling the nation. I do not mean selling the national interest. It was more to the effect of making Thai people lose face. It is like losing face from verbal blunders. Speaking negatively about one's own country is like betraying the nation. It makes foreigners misunderstand Thailand. A leader does not speak about personal matters or a political conflict in public because it is about manners and principles. The prime minister made two mistakes: saying something that was out of place and lying.

What do you make of the allegations that you insulted womanhood and resorted to profane language?

Generally, people who read my posts will understand the meaning. I think those who protest against me are programmed to think that I insult prostitutes and females. Is there anything in what I posted which offended the female gender? What I meant was prostitutes are not evil because they sell themselves, not the nation. However, a woman who sells the nation is evil. I did not label the prime minister as a prostitute. I am surprised the banners put up against me allege that I insult women. Why do they not defend the prime minister by saying she has not sold the nation? But they say that the prime minister is not a prostitute. I am surprised. They intend to pressure me and discredit me because I have made critical political comments, especially about the Pheu Thai Party. I think the words I used may have been too harsh but harsh words and rude words are different.

How has your life changed since the controversial post and now that you've been served with a lawsuit?

I am nomadic now. I cannot go home because it is surrounded by the red-shirt community. Friends have told me to watch my back. Many people have given me moral support and offered to raise funds for my legal defence [against defamation]. Someone offered accommodation for my safety. I'm grateful for their kindness. In return for their kindness, I will not waver in my stand. To those who hold grudges [against me], the explosion at the Thai Rath office troubles my colleagues. There are threats and complaint letters urging the Thai Rath management to dismiss or sack me. I have been through a lot. I stand firm and have confidence about what I say and do. I don't fear threats. Thai Rath has nothing to do with the conflict. I have not used my work [cartoons] in Thai Rath to explain my remark. It's an expression of my personal opinion.

criticise – to say that you disapprove of somebody/something; to say what you do not like or think is wrong about somebody/something วิจารณ์, ติเตียน,จับผิด
sue – to take legal action against a person or organisation, especially by making a legal claim for money because of some harm that they have caused you ฟ้องร้อง
touch – to make somebody feel upset or sympathetic ทำให้ใรู้สึกไม่พอใจหรือเห็นอกเห็นใจ
touch a raw nerve – to mention a subject that makes somebody feel angry, upset, embarrassed, etc พูดถึงเรื่องที่ทำให้รู้สึกโกรธ,อารมณ์เสีย,อาย
distort – to change something such as information so that it is not longer true or accurate  บิดเบือน
intention – a plan in your mind to do something ความตั้งใจ เจตนา แผนการ
whitewash – to try to stop people from discovering the true facts about something, in order to prevent someone in authority from being criticised ปกปิดสิ่งไม่ดี
remark – something said คำพูด
strike a chord – to say or do something that makes people feel sympathy or enthusiasm
extensively – widely; covering a large area อย่างกว้างขวาง
caught off guard – to be surprised by something unexpected ตกตะลึง, งงงันม เผลอ
evil – very bad or cruel ชั่วร้าย
imply – to suggest that you think something without saying it directly บอกเป็นนัย, แสดงนัย
tantamount to – tantamount to being almost the same or having the same effect as, usually something bad เท่ากัน
interest – an advantage or benefit to someone or something ผลประโยชน์
lose face – to be less respected or look stupid because of something you have done หน้าแหก หน้าแตก, เสียหน้า
verbal  – spoken, not written ที่ใช้คำพูด
blunder – a careless or embarrassing mistake ความผิดพลาดจากความสะเพร่า
negative – bad ที่เป็นด้านลบ
betray – to deliberately do something that harms someone who needs your support  หักหลัง ทรยศ
conflict – an angry disagreement between people or groups ความขัดแย้ง
manners – behaviour that is considered to be polite in a particular society or culture มารยาทสังคม
principle – a basic belief, theory, or rule that has a major influence on the way in which something is done; a moral rule or standard of good behavior กฎ, ข้อปฏิบัติ, หลักปฏิบัติ
out of place – not suitable for a particular situation; not in the correct place ไม่เหมาะสม,ไม่อยู่ในที่ (ที่ควรอยู่)
lie – to deliberately say something that is not true  โกหก, พูดเท็จ
allegation – an accusation; a statement that someone has done something wrong or illegal even though this has not been proved ข้อกล่าวหา
insult – to say or do something to someone that is rude or offensive พูดแดกดัน, พูดจาบจ้วง
resort to – to do something extreme or unpleasant in order to solve a problem ใช้มาตรการรุนแรงในการแก้ปัญหา ยุติปัญหา
profane – to use offensive or obscene words or phrases หยาบคาย
prostitute – a person who has sex for money โสเภณี, ผู้หญิงขายตัว
offend – to cause someone to be upset or angry ซึ่งก่อให้เกิดความขุ่นเคือง
gender – the fact of being either male or female เพศ
label – to use a word or phrase to describe someone or something, especially one that is not completely fair or true ติดชื่อ
banner – a wide piece of cloth with a message on it  แถบผ้า ป้าย
allege – to say that something is true or that someone has done something wrong, even though this has not been proved  กล่าวหา
defend – to say things to support someone or something ปกป้อง
intend – to plan to do; to want to happen ตั้งใจให้เกิดขึ้น, วางแผนไว้
pressure – to try to make someone do something by forcing, threatening, or persuading them in a determined way กดดัน
discredit – to cause people to stop respecting someone or believing in an idea or person ทำให้สูญเสียความเชื่อถือ,ทำให้เสื่อมเสียชื่อเสียง
harsh – strict, unkind and often unfair อย่างรุนแรง
rude – not polite หยาบคาย
controversial – causing disagreement or disapproval ความไม่ลงรอยกัน
lawsuit – a case that a court is asked to decide involving a disagreement between two people or groups คดีที่ยื่นฟ้องต่อศาล
nomadic – moving around from place to place without a permanent home ซึ่งเร่ร่อนไปในที่ต่างๆ
surrounded – having something completely around all sides ถูกล้อมรอบ
community – a group of people who share the same  job, interests, religion, etc สังคม
moral support – giving someone encouragement ให้กำลังใจ
funds – money needed or available to spend on something เงินทุน
legal – relating to the law or lawyers เกี่ยวกับกฎหมาย
defence – the people in a court case who try to prove that someone is not guilty การเป็นทนายให้
defamation – the offence of writing or saying something bad about someone that is not true and makes people have a bad opinion of them การใส่ร้าย
accommodation – a place for someone to stay, live, or work ที่พัก
grateful – a feeling that you want thank someone because they have given you something or done something for you สำนึกบุญคุณ
waver – to be or become weak or unsteady; to hesitate and be unable to make a decision or choice แกว่งไปแกว่งมา (การตัดสินใจ, โอกาส, ความคิดเห็น), แอ่นไปแอ่นมา
grudge – a feeling of anger towards someone because they have done something to you that does not seem right or fair ความบาดหมาง, ความไม่พอใจ, ความคับข้องใจ
colleague – someone who works in the same organisation or department as you do เพื่อนร่วมงาน
threat – saying that you might do something bad or harmful, especially in order to make someone do something  การขู่เข็ญ การคุกคาม ทำให้กลัว
complaint – when someone says that something is wrong or not satisfactory การบ่น, ข้อที่ไม่พอใจ
urge – to advise someone very strongly about what action or attitude they should take ผลักดัน, กระตุ้น
dismiss – to force someone to leave their job  ไล่ออกจากตำแหน่ง
sack – to remove someone from a job ปลดออกจากตำแหน่ง
stand firm – to refuse to change your opinion or policy despite pressure from other people
confidence – being certain of your abilities or of having trust in people, plans, or the future ความมั่นใจ