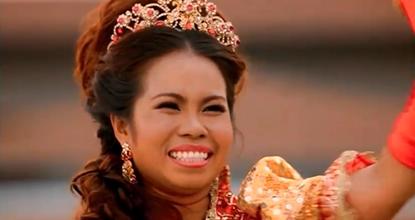 Let's continue with our look at Thai entertainers who had a difficult road to the top. Today we'll find out how tiny (147cm) Sudarat "Tukky"(ตุ๊กกี้) Butrprom got her break. 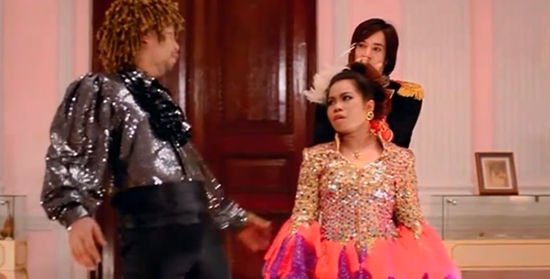 Lacking the size and looks of your typical Thai female star, "Tukky" has one big advantage. She is genuinely funny. 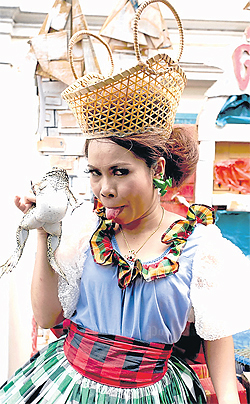 You know her as: Sudarat "Tukky" (ตุ๊กกี้) Butrprom. She's one of the most successful comedy actresses in Thailand today who has appeared in numerous TV shows and starred in many films. But the story of her climb to the top isn't as funny as the jokes she delivers. Tukky gave up a good job for a low-paid one and incurred huge debt before the spotlight turned to her.

Her journey: Thinking that her looks and short stature (147cm) aren't favoured by Thai show business, Tukky first decided to work for Phuket Fantasea, a nighttime cultural theme park, as a performer after she graduated with a fine arts degree in Thai dance from Mahasarakham University. She made B30,000 a month there and sent money back to her parents every month, like a good Thai child.

However, long before that, she harboured a dream to work with Workpoint Entertainment, a company known for making many popular TV shows in Thailand. Before her graduation, Tukky had already applied for a job at the company five times to no avail. When she heard of a job opening as a costume girl there, it didn't take long for her to apply even though it meant she would receive only one-third of what she made at Phuket Fantasea.

Despite the drastic pay cut, Tukky didn't want her parents to worry so she applied for different credit cards so she could continue sending back her monthly contribution. This resulted in B300,000 in credit card debt over a period of three years.

Luckily, she received her first break in show biz accidentally when she got to act in comedy plays on TV show Ching Roi Ching Lan when an extra was absent.

Here, "Tukky" is seen in one of her movie roles.

Her performance got noticed and she started to make a name for herself for her hilarity and outrageous dress sense. Fame brought Tukky bigger and more roles and she eventually paid off all her debt. Not only has she now made enough to build a house for her parents but also to buy a collection of Blythe dolls.

typical – happening in the usual way; showing what something is usually like ตามแบบฉบับ, ตามปกติ
advantage – a condition giving a greater chance of success ความได้เปรียบ
genuinely – really  โดยแท้
comedy – a (type of) film, play or book which is intentionally funny either in its characters or its action ความตลกขบขัน
numerous – many มากมาย
incur – to lose money, owe money, or have to pay money as a result of doing something ประสบ, ได้รับ
debt – an amount of money that you owe หนี้
spotlight – the centre of public attention จุดสนใจของผู้คน, เป็นที่สนใจ
stature – a person's height  ความสูง (ของร่างกาย)
favoured – liked more than other things
theme park – a large park where people pay to play games and have fun and where all the entertainment is designed according to one theme สวนสนุก
performer – a person who performs for an audience in a show, concert, etc  นักแสดง, ผู้แสดง
fine arts – activities in which people create beautiful or interesting objects, for example painting and sculpture วิจิตรศิลป์, งานศิลปะที่มุ่งเรื่องความสวยงาม
harbour – to keep a particular thought or feeling in your mind for a long time
popular – a situation in which someone or something is liked by many people เป็นที่นิยม, เป็นที่ชื่นชอบ
graduation – the act of successfully completing a university degree, or studies at an American high school; a ceremony at which degrees, etc. are officially given out การสำเร็จการศึกษา, การได้รับปริญญา
apply – to make a formal request for a job of position สมัครงาน
to no avail – without success อย่างไร้ผล
drastic – having a very big effect มีผลกระทบอย่างใหญ่หลวง
contribution – a regular payment that you make when you are working  การลงทุนหรือช่วยเหลือ
break – an opportunity to do something, usually to get something that you want or to achieve success  โอกาสที่ดี
extra – someone who has a very small part in a film, for example as a member of a crowd
absent – not in the place where you should be or are expected to be ขาด, ไม่มา
hilarity – a situation in which people laugh a lot ความสนุกสนานเฮฮา,ความร่าเริง
outrageous – very unusual and slightly shocking  ซึ่งกระตือรือร้น
sense – a natural ability or quality that some people have สติสัมปชัญญะ,ความฉลาด
fame – the state of being famous or very well known ชื่อเสียง
role – an actor's part in a film or play บทละคร
eventually – at the end of a period of time or at the end of a process ในที่สุด
collection – a group of objects, often of the same sort, that have been collected (gathered together over period of time) การสะสม การเก็บรวบรวม