With the biopic Young ‘Bao’ premiering tomorrow, there is renewed interest in veteran rocker Yeunyong "Ad Carabao" Opakul and his band. This Guru magazine story details his difficult road to fame.

Ad pictured with his popular Carabao band. A movie about their difficult first years is being released tomorrow. 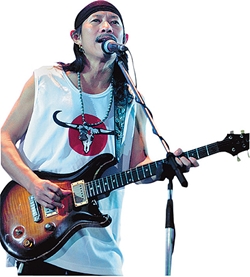 You know him as: Yeunyong "Ad Carabao" Opakul, the front man of the legendary Thai rock band that also has fans outside the country. They are known for their phleng phuea chiwit, or "songs for life". However, with the anti-establishment sentiment in the songs he wrote for Carabao, you probably wouldn't believe Ad used to hold down a nine-to-five job.

His journey: After moving to Manila to study architecture at Mapua Institute of Technology, he met other Thai students there who introduced him to music by Led Zeppelin, John Denver and The Eagles. Ad formed Carabao to perform at the institute's fair with two Thai students. The word "carabao" is Tagalog for buffalo and it represents a fighting spirit.

Ad's road to stardom wasn't lined with roses or women throwing their underwear at him. Carabao's first four albums didn't make him famous. The group went on a tour, performing at movie theatres nationwide to small audiences. The real turning point for Ad and his band came in 1984 with the release of their fifth album, Made In Thailand, which made history, selling five million copies.

release – to make something available to the public  ออกวางตลาด, ออกวางจำหน่าย
legendary – very famous or well known for a long time
anti-establishment – against the establishment, the most important and powerful people in a country, who are often thought of as being conservative and wanting to preserve their own power and influence
sentiment – a thought, opinion or idea based on a feeling about a situation, or a way of thinking about something กระแส, แนวความคิด, ความคิดเห็น
architecture – a particular style or way of designing buildings สถาปัตยกรรม, รูปแบบการก่อสร้าง
firm – a business or company บริษัท
reunite – to bring together again รวมกันใหม่
founding – starting an organisation, company, political party, etc. ก่อตั้ง
pursue – to try to achieve something ดำเนินตาม, พยายามเพื่อให้ได้มาซึ่ง
lined with roses – of a situation in which it is very easy to succeed
underwear – clothes that you wear under other clothes and next to the skin  ชุดชั้นใน
audience – the group of people gathered in one place to watch or listen to a play, film, someone speaking, etc. ผู้ชม
turning point – a time when an important change takes place in a situation, especially one that makes it better จุดที่มีการเปลี่ยนแปลง