Five people were injured and four cars damaged when six steel beams fell from an elevated train station under construction near the Tao Poon intersection yesterday. 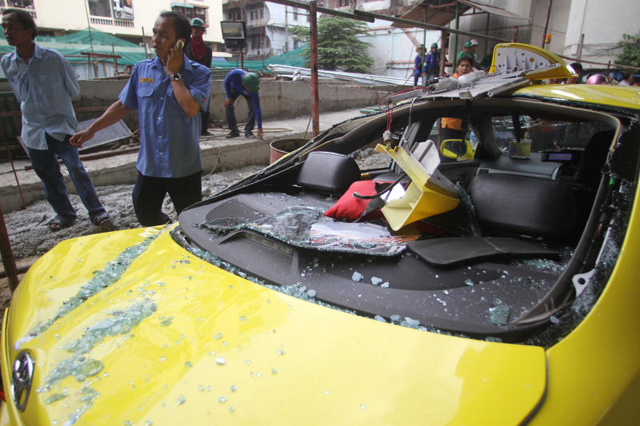 A taxi is badly damaged by steel beams which fell during construction of a new electric train line near Tao Poon intersection in Bang Sue district yesterday.  PORNPROM SATRABHAYA

Five people were injured and four cars damaged when six steel beams fell from an elevated train station under construction near the Tao Poon intersection yesterday.

The steel beams that fell from Tao Poon train station were 15 metres long and about 10 centimetres wide. 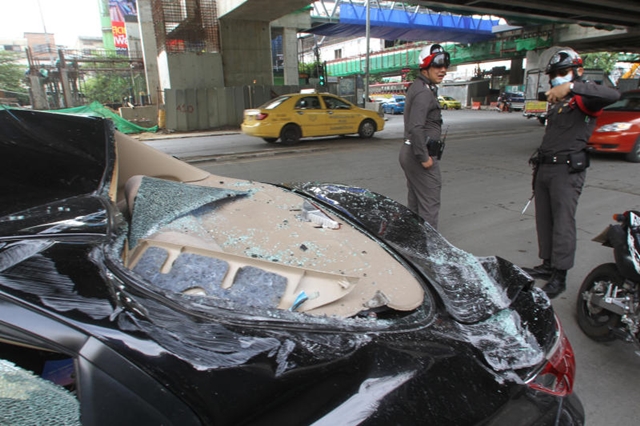 One of the four cars damaged by the falling beams. PORNPROM SATRABHAYA

They hit two taxis and two cars that were waiting at traffic lights on Pracha Rat Sai 2 Road at Tao Poon intersection. The injured included a female taxi passenger who was cut by fragments of glass and a female taxi driver who suffered head injuries after the roof of her cab was caved in.

Local window cleaner Chai Preedecha, 55, said he narrowly escaped being hit by a falling beam that smashed a security guard firm's window he was cleaning. He said he had seen objects falling from the train station on three occasions, but the latest incident was the most serious. Gen Kittisak Ratthaprasert, who lives nearby, said objects often drop from the elevated station. 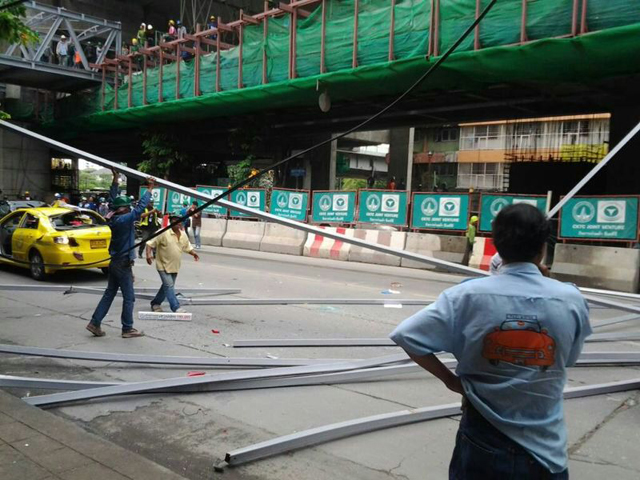 On April 26 a concrete barrier also fell from the elevated structure near the same intersection.

Ronnachit Yaemsa-ad, deputy governor of the Mass Rapid Transit Authority (MRTA) which owns the Purple Line project, said the beams had been installed as a walkway for construction workers and were being removed from the station.

The accident happened after a steel cable securing the beams snapped. An MRTA source said the contractor was required to stop traffic before removing the beams but had failed to do so.

beam – a long thick piece of metal, concrete, etc. especially used to support weight in a building or other structure คานรับน้ำหนัก
construction – the work of building or making something, especially buildings, bridges, etc. การก่อสร้าง
intersection – a place where roads, lines, etc., join or cross each other สี่แยก
injure – to hurt or cause physical harm to a person or animal ทำให้บาดเจ็บ, ทำร้าย
mishap – an accident or mistake  อุบัติเหตุ, เหตุร้าย
elevated – raised above the ground, or higher than the surrounding area ซึ่งอยู่ในระดับที่สูงกว่าสิ่งอื่น
female – being a woman or a girl สตรี, ผู้หญิง, เพศหญิ
fragment – a small piece of a large object that has broken, often into a lot of pieces  ส่วนที่แตกออกมา
cave in – to fall down and towards the centre ยุบตัว, พังทลาย
local – in or related to the area that you live, or to the particular area that you are talking about  ท้องถิ่น
narrow – achieved with difficulty, in a way that shows how close the result was หวุดหวิด
escape – to get away from a place where you are in danger หนี
smash – to break something noisily into many pieces by dropping or hitting it with a lot of force ทำให้แตกเป็นเสี่ยงๆ, ทำให้แตกเป็นชิ้นๆ
firm – a business or company บริษัท
occasion – a time at which something happens ครั้ง
incident – something that happens, usually something bad เหตุการณ์
gather – to bring things together that have been spread around รวบรวม
joint venture – a business activity carried out by two or more companies or groups การลงทุนร่วม
contractor – a person or company whose job is to do work for another person, organisation, company, etc. ผู้รับเหมา
comprise – to consist or be made up of two or more things ประกอบด้วย
stretch – to spread over an area of land กินเขต, ขยายออก
barrier – a bar or gate that stops people, animals or vehicles from entering a place  สิ่งกีดขวางทางผ่าน
structure – something large such as a building or a bridge that is built from different parts โครงสร้าง
deputy – a person whose rank is immediately below that of the leader of an organisation รอง
Mass Rapid Transit Authority (MRTA) – the government agency operating the MRT Chaloem Ratchamongkhon underground line with connections to the BTS การรถไฟฟ้าขนส่งมวลชนแห่งประเทศไทย
install – to put a piece of equipment somewhere and make it ready for use ติดตั้ง
remove – to take something away เอาออกจาก
cable – thick strong metal rope used on ships, for supporting bridges, etc. สายเคเบิ้ล, เชือกหรือเหล็กเส้นขนาดใหญ่
source – someone who gives information แหล่งข่าว