No trial any time soon for Red Bull heir Vorayuth Yoovidhaya after prosecutors accepted his appeal against a speeding charge. He has been implicated in a hit-and-run killing of a police officer last September. 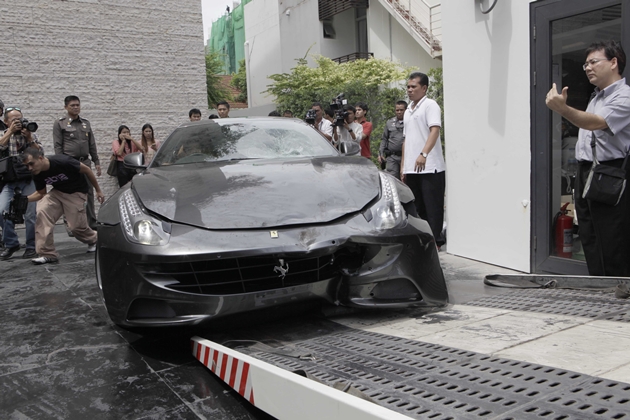 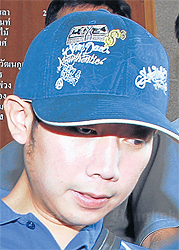 Public prosecutors have postponed for the fourth time an indictment against Red Bull heir Vorayuth Yoovidhya for his alleged hit-and-run killing of a police officer last year.

Ruecha Krairiksh, lead prosecutor in the case, said the indictment had been delayed again because the suspect has appealed to Attorney-General Chulasingh Vasantasingh against a speeding charge.

Mr Ruecha said the prosecutors had recommended a charge of speeding be pressed against the suspect after evidence showed he was driving at 170kph when he struck the officer.

He said he agreed with the decision for police not to press a drink-driving charge due to lack of evidence.

Mr Ruecha said he will ask police to speed up the questioning of witnesses over the speeding charge because the statute of limitations for that charge will expire in September.

He said he will ask the suspect to report to the prosecutors as soon as he receives the police report on the matter.

The policeman's body was dragged about 200 metres along the road.

Mr Vorayuth allegedly fled the scene and was arrested several hours later at his home on Sukhumvit Soi 53.

heir – a person who will legally receive money, property or a title from another person, especially an older member of the same family, when that other person dies ทายาท, ผู้สืบสกุล, ผู้รับมรดก
indictment – an official statement accusing someone of a serious crime การฟ้องร้อง, การดำเนินคดี
delay – to do something later than is planned or expected เลื่อน, เลื่อนเวลา
prosecutor – a lawyer whose job is to prove in court that someone accused of a crime is guilty อัยการ
postpone – to delay; to decide that something will be done at a later time เลื่อนออกไป
alleged – claimed to be true although not yet proven ที่ถูกกล่าวหา
hit-and-run – (of a road accident) caused by a driver who does not stop to help ที่ชนแล้วหนี
suspect – a person who is thought to have committed a crime ผู้ต้องสงสัย
appeal – to request that a decision by changed ขออุทธรณ์
Attorney-General – the top legal officer in some countries อัยการสูงสุด
charge – an official statement accusing someone of committing a crime ข้อกล่าวหา
recommend – to advise someone that they should do something  แนะนำ
press a charge – to accuse someone officially of committing a crime ตั้งข้อกล่าวหา, ฟ้อง
suspect – a person who is thought to have committed a crime ผู้ต้องสงสัย
evidence – facts statements or objects that help to prove whether or not someone has committed a crime หลักฐาน
strike – to hit with great force ถั่งโถม, พัดกระหน่ำ
drink-driving – driving a vehicle after drinking too much alcohol ขับรถในขณะเมาเหล้า
due to – because of เนื่องจาก
lack of – when there is not enough of something  ขาด
lawyer – an attorney ทนาย
lodge – to formally make something such as a complaint or a claim  ยื่น (คำร้อง)
witness – someone who tells a court or investigators what they know about a crime พยาน
accident reconstruction – determining exactly how an accident happened
expert – someone who has a particular skill or who knows a lot about a particular subject ผู้เชี่ยวชาญ
statute of limitations – the legal limit on the period of time within which action can be taken on a crime or other legal question  อายุความ
expire – to come to an end or stop being in use หมดอายุ
matter – a situation or subject which is being dealt with or considered เรื่อง, ภารกิจ, งาน
ram – to hit or push something with force กระแทก
drag – to pull something or someone along with difficulty ลาก
initially – at first ในเบื้องต้น
flee (past form: fled) – to leave a place or person quickly because you are afraid of possible danger หนี อพยพ
scene – site; a place where something happens or happened สถานที่เกิดเหตุ
arrested – caught by the police and taken to a police station because you are believed to have committed a crime ถูกจับกุม
reckless – not thinking about the possible bad effects of your actions สะเพร่า
provide assistance – to give help to someone
victim – someone who has been affected by a bad situation, such as a disaster, illness or an accident เหยื่อผู้เคราะห์ร้าย