Luang Pu Nen Kham Chattiko was suspiciously wealthy says a pilot who took him on 300,000-baht flights, paid for in cash. He had a taste for young girls too, a former aide says. 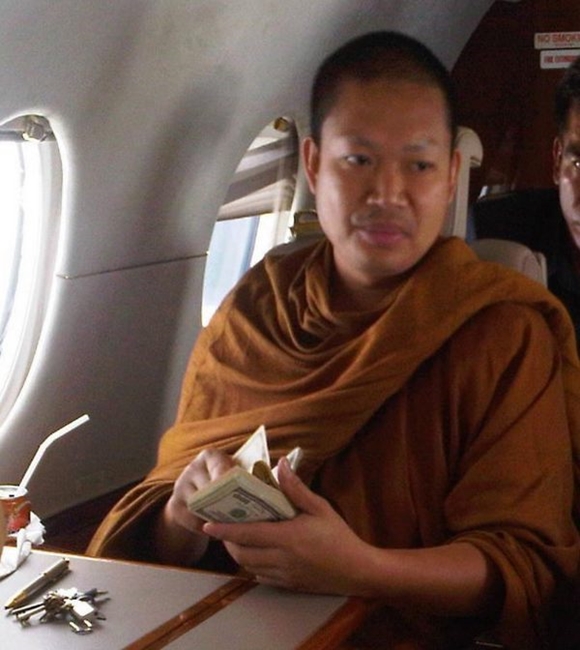 Luang Pu Nen Kham Chattiko with a wad of US $100 bills (each worth about 3,000 baht), one of the acts that led Wg Cdr Piya Tregalnon to post photos and condemnation of the monk on his Facebook page.

The hidden life of super luxury led by embattled monk Phra Wirapol Sukphol, better known as Luang Pu Nen Kham Chattiko, has been exposed by a pilot who used to find private jet rentals for the holy man.

A message, claimed to be written by Bangkok Aviation Centre founder and CEO Piya Tregalnon, revealing the jet-setting monk's unusual wealth has been shared widely on social networks.

Wing Commander Piya Sunday confirmed he posted the message on his Facebook page.

"I have been wondering for three years why the monk has such large amounts of money and assets. He is not even a very famous monk," he said.

"When he came into the spotlight, I decide to speak out as I think his wealth is suspicious." 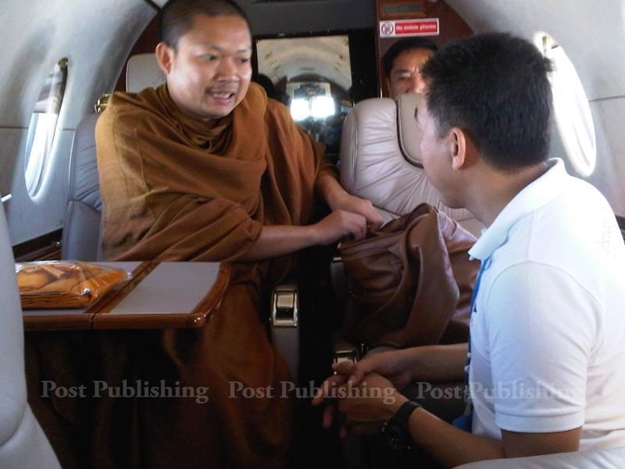 Wing Commander Piya Tregalnon (right) posted this photo of himself with Luang Pu Nen Kham Chattiko during a charter flight.

The Facebook post dates back three years, when Wg Cdr Piya was asked to find a seven-seat private jet for the monk to travel back and forth between Bangkok and Ubon Ratchathani.

The monk often travelled in a super luxury Maybach-brand car and boasted that he had a Mercedes-Benz S500, a BMW X6 and a Mini Cooper just for driving inside the temple compound. He also claimed to have a yacht, Wg Cdr Piya said.

The monk also showed bundles of US$100 (3,129 baht) banknotes fully packed in his kitbag and claimed he also had gold bars inside, he said.

He showed two chequebooks of US banks with his name printed on every cheque.

The monk said he could withdraw more than $10 million for each cheque because he had a lot of money deposited in the banks, Wg Cdr Piya said.

He said he distanced himself from Luang Pu Nen Kham after the monk asked him to buy a private jet in the US.

"I am not afraid of being charged at all after revealing this issue. I wrote what I had seen with my own eyes. I do not want to see a person who exploited Buddhists' faith to obtain money to remain at large," the pilot said.

Meanwhile, a former close aide of Phra Wirapol told the Department of Special Investigation Sunday the monk had drunk alcohol, taken illicit drugs and had sex with many teenage girls.