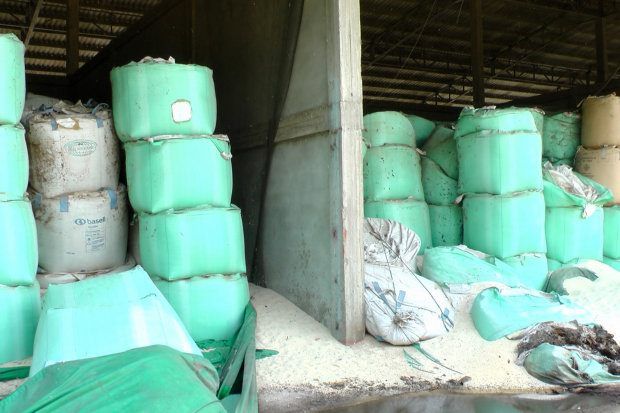 Not only were hundreds of tonnes of rice missing from inspected warehouses, much of what was on hand looked like this rotting and spoiled rice. (Post Today photo) 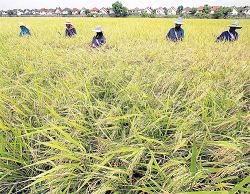 Rice farmers in Bangkok’s Nong Chok district inspect their crops, which will be ready for harvest soon. Many farmers are selling the crop under the rice pledging scheme which pays 15,000 baht per tonne. The government recently overturned a decision to cut the price to 12,000 baht per tonne. (Photo by Thanarak Khoonton)

Four rice mill operators will be charged with embezzlement after rice stocks in their warehouses were found to not match the amounts reported to the government.

He said there is solid evidence to back theft charges against Wongchai Charoenchaikij mill in Chai Nat, Faipinyo Panich mill in Pathum Thani, Eksuwan Karnkha mill in Songkhla and Rung-arun mill in Phatthalung.

At Wongchai Charoenchaikij mill, the rice stocks were 555 tonnes short of milled rice and the stocks were badly contaminated.

Rung-arun mill had more paddy rice in its stocks than reported.

Pol Gen Worapong said an in-depth investigation has been ordered into the irregularities at the mills to determine if state authorities were involved. He was speaking after chairing a meeting of police conducting the inspections.

Pol Gen Worapong said the four mills are among 27 warehouses and mills where irregularities were found in recent nationwide rice stock inspections in the wake of graft allegations.

The Department of Internal Trade has ordered eight rice mills and warehouses to suspend rice-pledging activities following the inspections, he said.

These warehouses have more paddy rice than reported but the milled rice is missing, Pol Gen Worapong said. They have been instructed to mill the paddy rice pending another round of inspections.

The Department of Special Investigation (DSI) has been asked to inspect 11 rice mills in Nakhon Ratchasima where paddy rice stocks exceed reported amounts.

"Some millers claimed their machines are out of order. Some claimed they are paid rice, not money, for their services [to other customers]," Pol Gen Worapong said.