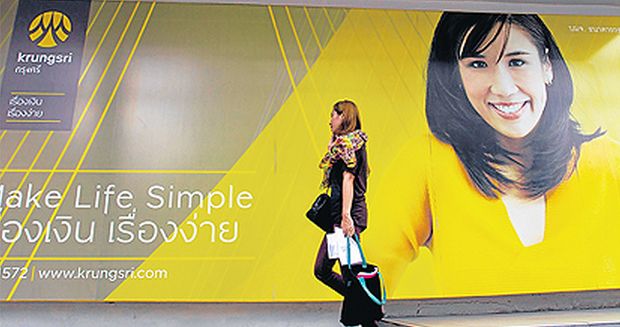 If successful, the acquisition would increase foreign banks' share in total commercial bank assets in Thailand to 26% from 18%. BAY would become the largest foreign-owned bank in Thailand, as the fifth-largest commercial bank here.

It would also mark the first time the 49% foreign ownership limit is waived for an acquisition not related to financial rehabilitation of the acquired bank or liquidation of bank shares owned by the government.

BAY is a profitable bank and the share purchase will be from private shareholders.

Fitch believes this lenient attitude may be because Japan is the largest foreign direct investor in Thailand, contributing 30-40% of total FDI each year from the period 2001 to 2012.

The Bank of Thailand recently announced it will issue up to five foreign commercial bank subsidiary licences, which allow up to 20 branches and 20 ATMs. This will provide for a wider scope of activity than previous branch licences, but still falls short of a full banking licence. Fitch expects potential applicants to be Asian banks that are new entrants to Thailand.

In 2011 the central bank allowed existing foreign bank branches to increase their subsidiaries in Thailand up to 20 branches and ATMs. However, no foreign branches have been upgraded.

Most foreign-owned banks in Thailand are owned by Asian banks as part of their regional expansion strategies ahead of the upcoming Asean integration.

Fitch does not believe the acquisition of BAY will affect Thailand's four largest banks in the short to medium term. BAY is the leader in retail lending, particularly in auto-hire purchases and credit cards. Its wholesale segment may benefit from BTMU's relationships with Japanese borrowers, but lending to Japanese is not a large part of the Thai bank's loan portfolio.

Foreign-owned banks could be more competitive than Thai banks in intra-regional businesses, where leading Thai banks have yet to establish a meaningful presence, said Fitch. Bangkok Bank has more regional networks than its major Thai peers, as others pursue gradual strategies, mainly supporting Thai clients' business overseas and focusing on the Greater Mekong Subregion or China.

There are 15 commercial banks in Thailand. Four of them are foreign-owned banks with the foreign ownership limit waived above 49% when they acquired Thai banks.