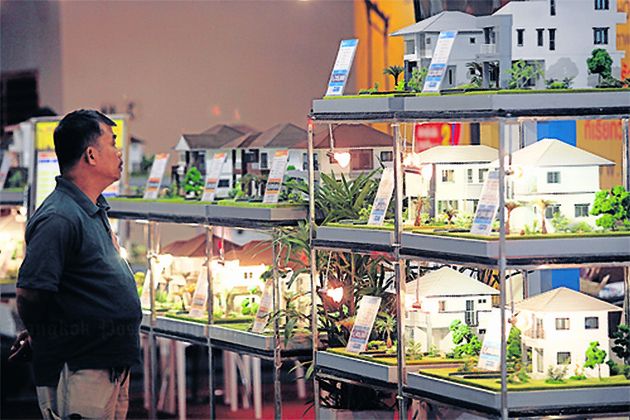 Lenders have tightened their mortgage criteria by cutting loan-to-value (LTV) ratios to prevent speculation in the wake of high household debt and an economic slowdown.

To limit risks, United Overseas Bank (Thai) (UOBT) has lowered the LTV rate - the ratio of a loan to the value of an asset purchased - to 80% from 90% for housing units priced 10 million baht or more.

The voluntary moves indicate banks have started applying more stringent requirements to not only lower-income earners but also higher-income groups after the central bank repeatedly warned of the risks stemming from rising household debt and signs of a property bubble.

The Bank of Thailand first announced compulsory minimum LTV ratios on mortgages in 2011 to cool down growth in the property sector amid oversupply worries.

It set the minimum LTV ratios at 90% for condominiums priced up to 10 million baht a unit and 95% for low-rise residences - single houses, duplexes and townhouses.

This means buyers have to make 10% and 5% down payments respectively before they can take out loans.

He said UOBT approves loans up to 95% of the value for first-time mortgages, 90% for second ones, and 70% for third ones. As a rule, it limits loans to third mortgages for each borrower.

With incomes at such levels, they are qualified to buy residences priced around 3-5 million baht each.

The move is in response to the Bank of Thailand's new rule which requires commercial banks to disclose the effective interest rate and total burden of interest, fines and other charges that may be incurred throughout the term of a mortgage product. Starting Aug 1 this year, the information must be included in their advertisements and potential customers must be informed of it before signing loan contracts.

TMB has also cut the LTV ratio for second mortgages and vacation homes to 70% from the normal levels at 90-95% for the same reason, said executive vice-president Kanchana Rojvatunyu.

Besides, the bank has focused on extending mortgages to homes priced 1-2 million baht a unit.

Unlike others, Bank of Ayudhya has not changed its LTV ratio but has limited lending to three mortgages for each borrower.

Its main concern now is customers who earn less than 10,000 baht per month as daily expenses have increased on the back of higher living costs and goods prices while household debt burden has skyrocketed.

Krungsri First Choice, a personal-loan brand under Krungsri Consumer, allows earners of less than 10,000 baht a month to apply for loans.

"We mainly take into account their ability to repay debts on a case-by-case basis," he said.