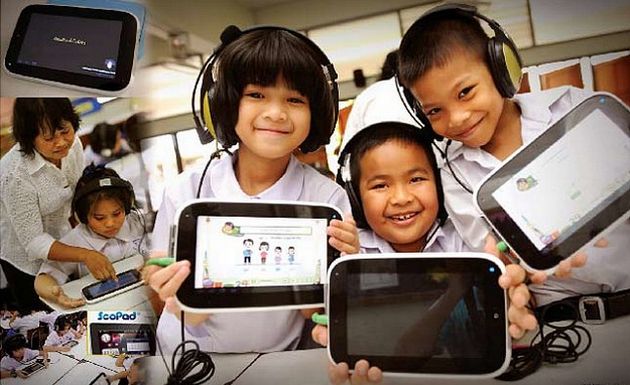 Teachers and students have both been generally pleased by the decision to put tablets in the classroom, but after a year many of these children would like something better, like an iPad.

About 60,000 teachers who were required to teach Prathom 1 students to use tablet computers as part of their lessons have not yet received their own devices a year after the programme was launched.

Prathom 1 students who received their tablets a year ago were unable to receive guidance from teachers.

The year-long delay in distributing the tablets arose from a disagreement over the tablet specifications between the authorities and the Chinese supplier.

An agreement has now been reached.

Information and Communication Technology (ICT) Minister Anudith Nakornthap said the tablets for the teachers are expected to arrive in the next few months.

Surapol Navamavadhana, an adviser to the ICT minister, said the contract was signed on July 2 to procure 59,384 tablets at a cost of $87.35 (2,700 baht) for each unit. All of the tablets are expected to be delivered within 60 days.

He said teachers' tablet specifications were similar to first graders' except for the HDMI port which could transfer data from the source device to a compatible computer monitor, projector or digital television.

Nannapath Sriprateth, a Prathom 1 teacher at Rajavinit School, said all of her students who received tablets had already passed on to Prathom 2 and took the devices with them.

"There is no sign of when the teachers' tablets will come," she said. "Last year I had to share the tablet with students during class, or use the device of a student who was absent that day...."

However, the policy clearly stated that teachers would be provided with the tablets and it should be carried out, she said.

An Education Ministry source said the delay meant the tablets would be obsolete by the time the teachers received them.

He said the price also appears to be too high, given the delay.

A survey also found 8.9% of all delivered tablets had problems, such as broken screens, programming errors and charging flaws.

Of the schools which had received the tablets, 98.8% of them used the devices in teaching, while only 0.8% did not use them despite having received them.

Most schools allowed students to use tablets for one hour a day. 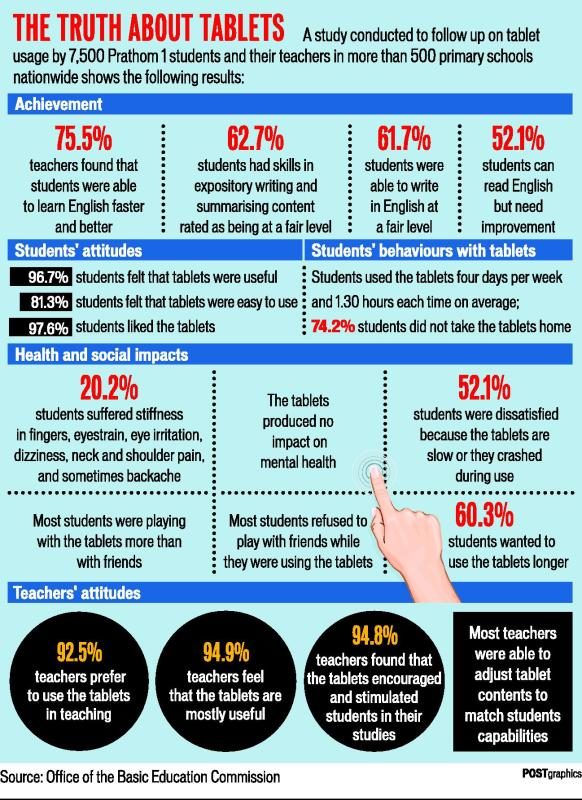